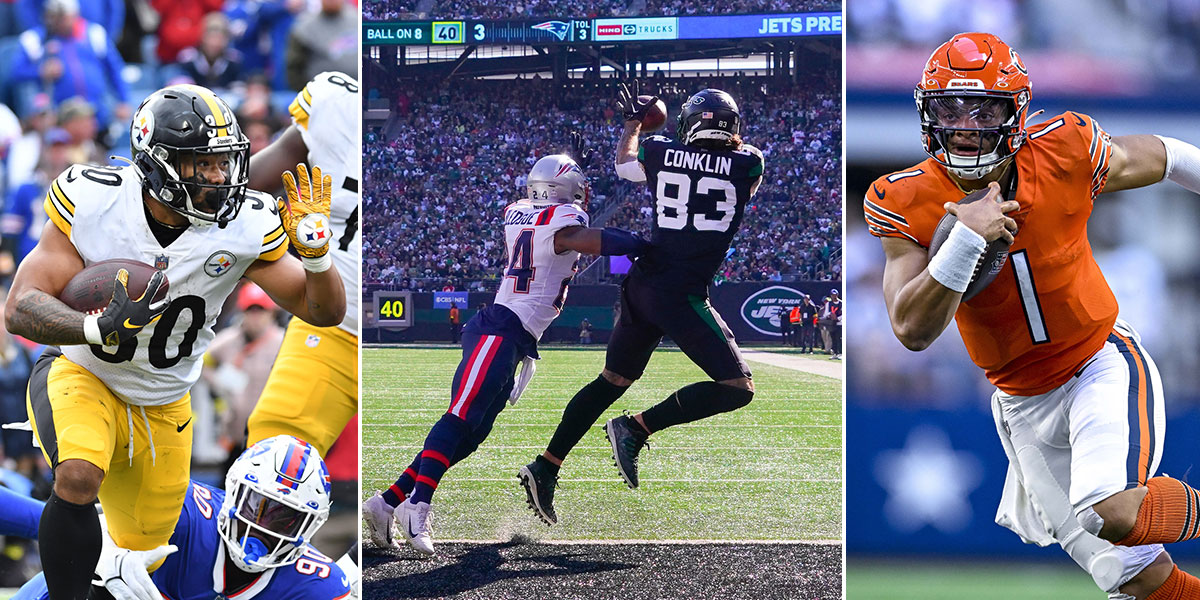 Over the weekend, I ran my first marathon and I realized there were a lot of parallels between it and my fantasy football season. At the beginning of my race, much like my season, I was full of confidence, sure my preparation leading up to it would put me in the very best position to succeed. The first few miles were great! I was running at a good pace, I felt good and my optimism soared to its highest level, just like my home league where my Mighty Cows started the season at 3-0. About halfway way into the race, I was still feeling good, but I could tell this might not be as easy as I thought. That’s where I’m at with my fantasy team, too. I was 5-2 at the halfway point, and feeling pretty good about the playoffs, but I have some obvious weaknesses that need to be addressed. If my marathon is any indication, the second half of the season could be an extremely difficult one. Hopefully, I won’t get leg cramps from that, too.

There’s not a lot to choose from this week on the waiver wire, but there are some good streaming options that can get your team through the byes. In the coming weeks, I’ll focus more on players to pick up for the fantasy playoffs, but it’s not too early to start thinking about players to stash now if you have the bench space.

Fields scored 26 fantasy points against the Cowboys, who were giving up the fewest fantasy points to quarterbacks. Chicago hosts Miami next week and the Dolphins are giving up 33 points to opposing teams on the road. In weeks 10 and 11, Fields has generous matchups against Detroit and Atlanta, making him a mid-range QB1 the next three weeks.

Garoppolo completed 21 of 25 passes for 235 yards and two touchdowns Sunday, the latest in a string of quality starts. Over the last four weeks, he has a top 10 quarterback rating and has thrown for the second-most passing yards in the league. The Niners are on bye, so you should be able to get Jimmy G cheap this week if you need a second QB or one to cover late-season bye weeks.

Here we go again with the Baltimore backfield where it’s seemingly a different running back taking control each week. Two weeks ago, Drake was the hot pickup off the waiver wire, but was dropped by many fantasy owners the very next week when Gus Edwards returned and became the starter. Thursday night, Edwards injured his hamstring against Tampa Bay and left Drake to take over. Show some caution with Drake and only bid if you need a one week solution at RB. The Ravens have a good matchup against the Colts coming up, but have a week 10 bye, after which J.K. Dobbins and Edwards could both be back, pushing Drake into fantasy irrelevance once again.

This isn’t exactly a Tony Pollard/Ezekiel Elliott situation in Pittsburgh, but Warren is steadily receiving more opportunities in the backfield and has clearly been the more efficient runner. Warren has taken over third-down duties, and while it’s unlikely we will see enough of a split to make Warren an option for fantasy teams, he’s worth a stash as a high-end handcuff.

Moore had seven catches for 92 yards and a touchdown against Minnesota. Over the last four games, Moore has the 12th most receptions among wide receivers and is the number two option behind DeAndre Hopkins. Moore is available in a surprising number of leagues and should be an every-week starter for fantasy teams.

The Chargers return from their bye week with an excellent matchup against the Falcons. Palmer looks to be a big part of the game plan with Mike Williams out a few weeks and Keenan Allen perpetually banged up. Palmer is flying under the radar because of not playing the last two weeks due to a concussion and the bye, but he was averaging almost seven targets per game through week six. Palmer is a good start this week against Atlanta, who is giving up the most fantasy points to wide receivers this season.

Denver is on bye next week which will keep some owners from bidding on him, so this might be your last chance to get Dulcich at a reasonable price. Since taking over as the starting tight end three weeks ago, Dulcich is averaging 12.1 PPR fantasy points, fifth best among TE in that span. Looking ahead to the fantasy playoffs, Dulcich has great matchups against Arizona in week 15 and Kansas City in week 17. Make him one of your priority picks this week if you’re hurting at tight end.

Conklin is sixth in tight end scoring, 7th in receptions and 4th in touchdowns. He’s a legit TE1 this season. However, he does face Buffalo before going on a week 10 bye, so if you pick him up, don’t expect an immediate payoff. Things will get better, however, and he has the most favorable schedule for tight ends for weeks 15-17, which are the fantasy playoffs for most leagues. Stash him now if you have the room.

Engram makes his weekly appearance in this article and will continue to do so until he’s owned in 50% of fantasy leagues. He’s 10th in fantasy points among tight ends and has a very favorable matchup the next two weeks against the Raiders and Chiefs. Engram is an ideal streamer for the next two games.