I was at an airport in Boston this weekend when a small child, no more than 8 or 9 years old, approached me. “Mister”, he said sheepishly, “are you Doug Burrell?” I knelt down, smiled, and said, “Yes I am.” The little boy looked up at me, swallowed hard, and asked, “The Doug Burrell who writes for Gridiron Experts?” Again, I smiled knowingly and took out my pen, prepared to sign an autograph for the young fan. “That’s me,” I replied, “do you read my articles?” The boy scrunched up his face, closed his eyes and yelled angrily, “YOU RECOMMENDED MATT RYAN IN YOUR WEEK 2 WAIVER WIRE ARTICLE!”

It’s true, I did recommend Ryan in week 2 after he threw for 352 yards and a touchdown. I don’t always get it right, but I try to back up my suggestions with data and analysis to make strong recommendations to help your team. This week, I wrote about 20 players I think can make a difference for your fantasy squads. As always, I give a suggested bid for leagues that use FAAB dollars. I only suggest players who are owned in less than 50% of Yahoo or ESPN leagues. Good luck on the waiver wire this week. If you see me in an airport, feel free to say hi. And to that kid in Boston, if you’re reading this, I’m sorry about Matt Ryan.

Geno Smith should be on rosters in every league. He has the highest QB rating, leads the league in completion percentage, he’s second in air yards and sixth in fantasy point scoring. Smith doesn’t face a top-six defense until week 10 and only one other one the rest of the season. We’ve seen a large enough sample size to see that Geno is a legit QB1. This might be your last chance to grab him, so quit waiting for Aaron Rodgers, Matthew Stafford and Russell Wilson to come around and go get Geno!

Ok, hear me out. I know Carson Wentz hasn’t been good this season, but he’s still putting up decent fantasy numbers. He’s fourth in passing yards, fifth in passing touchdowns and ninth in fantasy point scoring. Over the next three weeks, he makes for a great bye week fill-in for top QBs like Jalen Hurts, Justin Herbert, Patrick Mahomes and Josh Allen. Just hold your nose and trust me on this one.

Daniel Jones was efficient against a strong Packers’ pass defense, completing 21 of 27 passes for 217 yards. Better still, he rushed 10 times for 37 yards. Jones is now third in rushing among NFL quarterbacks behind only Lamar Jackson and Jalen Hurts. Jones is a good streaming option next week about the Baltimore Ravens before heading into a tough matchup against Jacksonville and then to Seattle in another plus matchup. Jones is worth a pickup if you’re thin at QB. 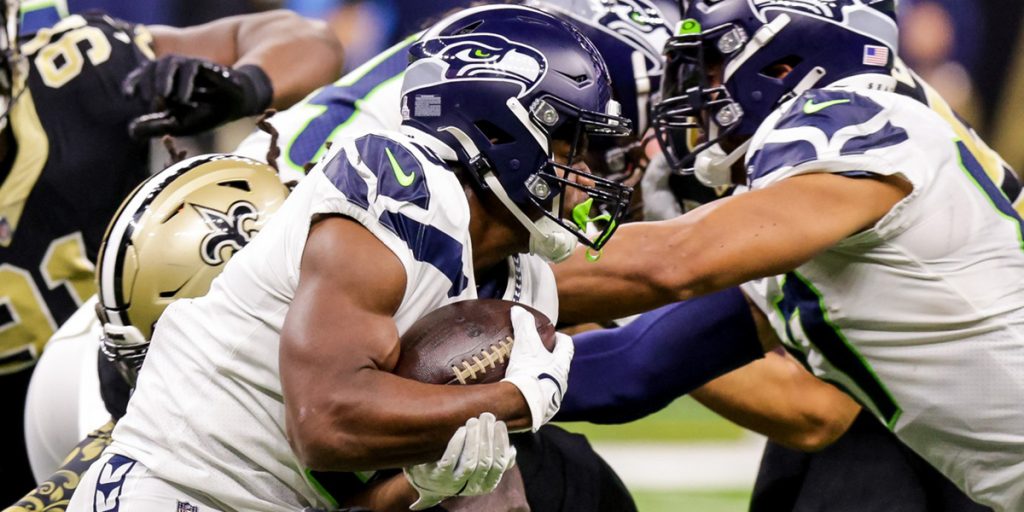 Rashaad Penny is out with a season-ending injury, paving the way for rookie Kenneth Walker, and his 6.3 rushing yards per attempt, to be the bell cow back for Seattle. Walker had 88 yards on 8 rushing attempts, along with a touchdown, Sunday. Over the last three games, Seattle is averaging 34 points per game and has the sixth most rushing yards in the league. Walker has favorable matchups the next four games, so he should put up RB1 numbers.

If your team is in dire need of an RB1 and you have a losing record, don’t be afraid to spend your entire FAAB budget on Walker.

Allgeier led the Falcons backfield against Tampa Bay, out-snaping Caleb Huntley, 39-16. Both deserve a spot on rosters, but Allgeier is the clear lead back in Atlanta,  He only rushed for 45 yards on 13 carries, but Atlanta was trailing 21-0 in the third quarter and were forced to pass the ball in a negative game script. Allgeier has tough matchups against San Francisco and Carolina over the next three games, so expectations should be tempered. Expect Allgeier to put up low-end RB2 numbers while Cordarrelle Patterson is out for at least the next three weeks.

Boone was on this list last week and his ownership did rise from 0% in both Yahoo and ESPN to 36% and 27%, respectively, but that just tells me you’re not convinced yet. Let’s start with Melvin Gordon’s PFF grade. Of the 63 running backs with enough minimum snaps to qualify, Gordon is rated 62nd. He has four fumbles this year and only lost out on a fifth because the play was negated. Boone holds on to the ball well, has great agility and has a career 5.6 yards per carry average. Boone was in for 41% of the snaps in week 5 and should see increased usage with Gordon’s fumbling issues.

Meyers is averaging seven catches per game for 87  yards. He’s sixth in the league in air yards on a per game basis and has a 31.4% target share in games he’s played. If Meyers in available in your league, he’s should be your second priority this week after Kenneth Walker.

Moore returned to the Cardinals starting lineup and caught seven passes for 68 yards. In his limited playing time this season, Moore has been targeted on 37.1% of routes run and is averaging a very nice 2.26 yards per route run. These numbers fare well for his playing time once DeAndre Hopkins returns in two weeks. Moore is a safe WR3/Flex play going forward.

Rookie Alec Pierce was the lone bright spot in the dark, depressing game between the Colts and Broncos Thursday night. Pierce somehow was able to extract 81 yards from the cold, dead hands of Matt Ryan. It was Pierce’s second game in a row with 80 yards. He’s averaging 14 PPR fantasy points the last two weeks without scoring a touchdown. Pierce should see his opportunities grow and become a usable Flex option for needy fantasy teams.

Hurst has been up and down this season which has made him a risky start, but taken as a whole, Hurst has put up decent numbers overall. He’s 8th in receptions and Red Zone targets. Cincinnati’s offense has struggled to score points, but if they get on track, Hurst will see a huge uptick in production. He’s worth the gamble if you need help at tight end.

People are going to way overspend on Hill after his four-touchdown game Sunday. But, if you can get him at a reasonable price, I like his boom/bust potential for standard leagues where the TE-12 is only averaging 5.5 points per game. He might net you a goose egg occasionally, but he has scored a touchdown in three out of five games. He’s worth the risk in your starting lineup in standard leagues.

Engram is putting up low TE-1 numbers. Among tight ends, he’s 10th in receptions, 12th in receiving yards, and 9th in air yards. He has a favorable schedule the next few weeks, so he’s a good streaming option if you play the matchups at TE or need to cover a bye week.