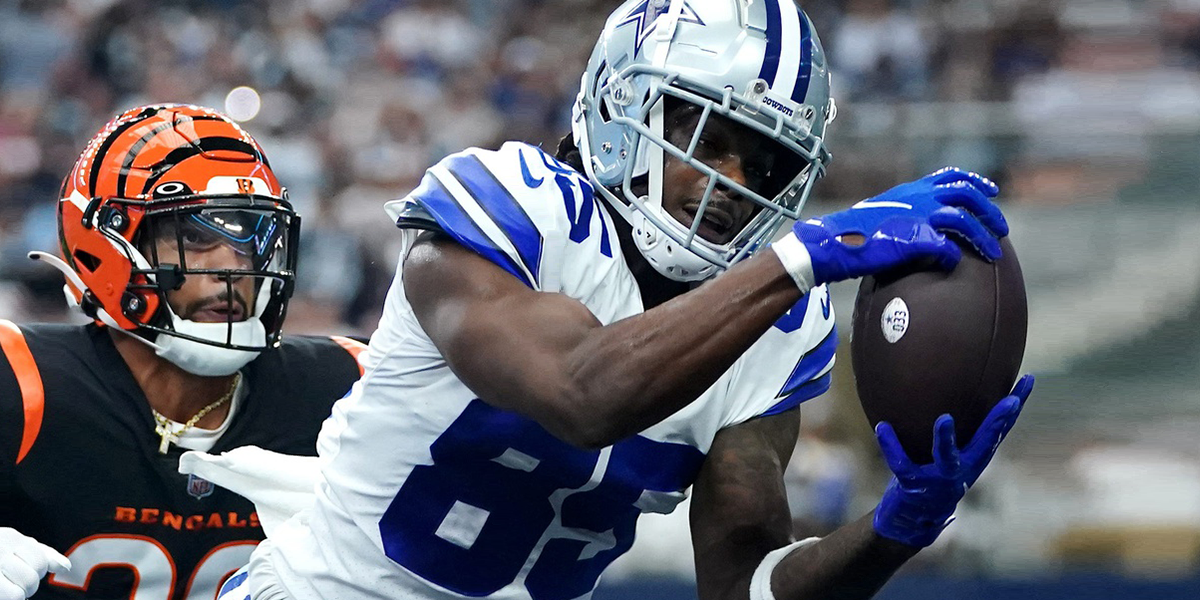 Week 2 of the NFL season is in the books and some of us are feeling better than others. I have two home leagues, one of which I’m sitting pretty at 2-0 and the other one, well, let’s just say I’m going through some stuff. But, with every Tuesday night comes the promise of redemption as another week of waiver claims fills our hearts with hope. May this week’s waiver wire bring you all your team’s needs!

Only players who are available in 50% or more of Yahoo or ESPN leagues are mentioned and I’ve given my suggested bid for each player.

After two games, Jared Goff has thrown for 6 touchdowns (second most in the NFL) and the Detroit Lions are averaging 35.5 points a game. This offense is legit and Goff is doing a fine job leading it with a passing rating just over 100. Goff isn’t someone you should go out and get as an every-week starter, but he’s a great streaming option the next two weeks against Minnesota and Seattle.

If you lost Trey Lance this week or you’re in a superflex/2QB league, Garoppolo will provide you with a safe, albeit uninspiring, floor. In deep leagues where starting quarterbacks are hard to find, you might have to bid aggressively on Jimmy G since it looks like this is his team for the rest of the season. As a starter last year, he finished as QB 17, so there is some limited upside to him, but he’s more likely to average 200 yards and 1.5 touchdowns a game.

Williams is already on 58% of Yahoo rosters, so you have a better chance of getting him in ESPN leagues. The Lions have shown through two games that they can support two usable running backs for fantasy teams. D’Andre Swift is making huge plays, but Williams leads the team in rushing attempts. He also leads in goal-line carries. Williams is purely a volume play. He hasn’t done anything noteworthy with his touches, but at least he’s getting them at a healthy rate. He’s also an injury away from RB1 status.

Mostert seemingly took over the lead back duties in Miami Sunday, out-carrying Chase Edmonds 11-5. He was in for the majority of early downs and got all the goal line work.  My guess is that trend will continue with Edmonds becoming more of a third down receiving back. I could see a 50/50 share between the two. But, the Dolphin’s offense has been spectacular and any back getting double digits touches per game should be rostered.

Filling in for an injured Alvin Kamara, Mark Ingram had 10 carries for 60 yards against a very good Tampa Bay defense and added two catches. However, he did fumble for the second game in a row. Ingram is only startable when Kamara is out, and according to Adam Schefter, the Saints do not believe his ribs will be a multi-week injury. Assuming Kamara is back next week, Ingram still has value as a handcuff and should be rostered in 12 team leagues where bench space is available.

If James Conner misses time with his ankle injury, Williams or Benjamin (or both) will step into his role. Both have made the most of their limited opportunities through the first two games, with Williams breaking a big 30 yard run on a 4th quarter scoring drive again the Raiders. It’s likely to be a 50/50 split with Kyler Murray stealing some carries. Keep an eye on Conner’s status, but if you have to make claims on Tuesday, I’d put in a small bid on one or both.

Brian Robinson was set to lead the Commanders backfield this season before he was shot in an attempted robbery in late August. Miraculously, he avoided the IR and returned to the practice field last week. Robinson is eligible to return from the PUP list in week 5. In his absence, Antonio Gibson hasn’t done anything to keep hold of the starting job, averaging just 3.1 yards per carry. If you have the roster space, now is a good time to get Robinson cheap before his return in a few weeks.

Garrett Wilson will be this week’s most popular pickup and you’ll have to pay up a bit to get him. He went off this week with 8 catches for 102 yards and two touchdowns. His 26.2% target share trails only Tyreek Hill among wide receivers with at least 10 targets. The question is whether the Jets will keep up their league leading 74.66% passing play percentage. That’s unlikely, and with Zach Wilson set to return in two weeks, the Jets could get closer to their 2021 passing rate of 63%. In any case, Wilson is clearly the WR1 on this team and will see a lot of targets.

The OSU product has scored twice and is also tied with Ja'Marr Chase for the league lead in end zone targets (5).

Dotson continues to be available in 58% of Yahoo league even after scoring two touchdowns in week 1. He followed that with another touchdown this week. He’s been on the field for 93% of Washington’s offensive plays.  His target share isn’t very high, but he has been extremely efficient with them. He won’t keep up his insane 30% touchdown rate, but he should continue to be an integral part of the Commander’s offense.

Meyers has an impressive 29% target share after two games to lead the Patriots receivers. He only has 150 yards, but with Mac Jones throwing the ball, Meyers won’t ever be among the league leaders in yards. He will provide you with a safe floor in PPR leagues.

Noah Brown has 10 catches in two games for the Cowboys and has taken on the number two receiver role behind CeeDee Lamb. The rookie seems to have nice chemistry with quarterback Cooper Rush and should remain as the second option once Michael Gallup returns. He’s among the highest graded receivers, coming in at #15 overall, according to Pro Football Focus. Hopefully, you read my column last week and picked Brown up. He’s no longer under the radar but bid with confidence. Brown is a safe WR3/Flex going forward.

Dortch is leading the Cardinals receiver in receptions, yards, and touchdowns. Lining up primarily in the slot, Dortch has done a great job of getting open for Kyler Murray and has caught 11 of the 13 passes thrown his way. Murray has a 130.1 passer rating when targeting Dortch, so expect those targets to continue while Rondale Moore is out. Dortch is available in over 95% percent of leagues.

Everett is available in 69% of ESPN leagues, although I can’t imagine why. Going into Monday night’s games, he ranks second behind Travis Kelce in PFF’s tight end receiving grades. He had 10 targets in the Thursday night game against the Chiefs. His quarterback is too good and the Chargers score too many points to leave Everett on the waiver wire.

Conklin ranks inside the top 10 tight ends in targets and receptions. Those receptions haven’t translated into many yards, but he does have a touchdown. His target volume gives him a usable floor for needy fantasy teams.

It’s Evan Engram reboot season and I’m here for it. He’s fourth among tight ends in receptions and has caught 11 of his 12 targets. He was Trevor Lawrence’s most targeted receiver in the Jags 24-0 win over the Colts. Engram has been a top 10 tight end in his career and is capable of reaching that again if starts getting red zone looks.

The Bengals have been struggling offensively, but Hurst has put up decent numbers with 10 catches in two games. If/when Cincinnati figures things out, Hurst will be in line for more targets and touchdown opportunities. Buy low on him now while you still can.

Thomas has become a viable option for teams who stream the tight end position. He has 5 targets in both games this year. He’s probably going to be a touchdown-dependent player, but Washington has shown they can score a lot of points. He has a great matchup against the Eagles next week, so don’t be afraid to put him in your lineup.