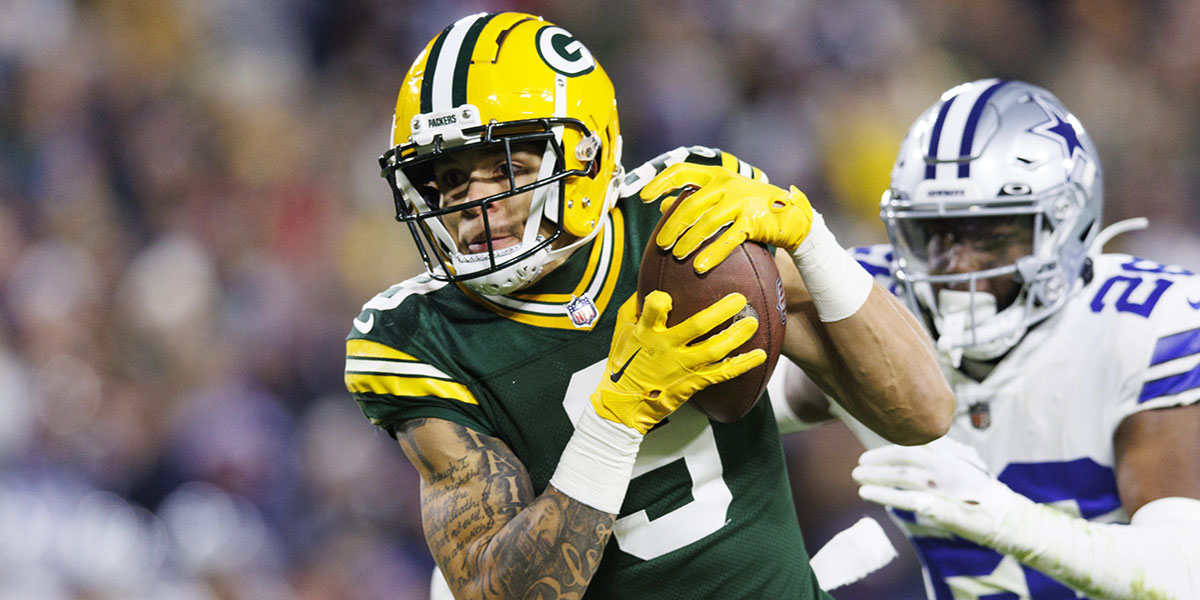 What a weird week in the NFL. I still can’t believe Indianapolis hired Jeff Saturday to coach the team the rest of the year. I think Jim Irsay has watched one too many seasons of Ted Lasso. Or maybe this is like the plot of Major League and Irsay is trying to tank the season and move the team out of town. What if Saturday was hired to lose, but no one told him about it? Well, I’ve seen the end of Major League and now I’m convinced the Colts will win the Super Bowl.

This is an exciting week for the waiver wire. There are a handful of players that could make a huge difference in a team’s fortunes. Don’t ignore these guys just because your team is in a good position. Blocking the teams behind you from getting potential studs can be just as important as improving your own team.

For many leagues, the trade deadline is this week. I like to identify players who are among the leaders at their position, but have horrible playoff schedules. For example, Justin Fields is on fire and he faces the Eagles in week 15, the first week of the fantasy playoffs, and the Bills in week 16. If I had a decent alternative at quarterback, I’d be looking to flip Fields for a RB1/WR1 this week. Some other players in a similar position as Fields are Joe Mixon, Tua Tagovailoa and Josh Jacobs. Test the waters and see if you can get an absolute haul for them.

Jimmy Garoppolo is kinda like John Stamos. You know him. You have nothing against him. You don’t go out of your way to watch him on TV, but if there’s nothing else on, you’ll put down the remote and watch. They’re both consistent and  that’s comforting. In his last five games, Garoppolo has scored between 15.9 and 18.02 fantasy points. In his last five series, Stamos has played an aloof, but likable, character with great hair. The point is, like Stamos, we can count on Garoppolo to give us a solid performance every week. And what’s more, he has the best fantasy football playoff schedule (weeks 15-17) of any quarterback, and he faces the Raiders in championship week.

It’s finally happening! White started over Leonard Fournette and rushed 22 times for 105 yards against a very good Seattle defense. Both players rotated by drive until Fournette left the game with a hip injury in the third quarter. It looks like he might only miss one game, but White is still one of the top waiver adds of the week, regardless. The Bucs have a bye this week, so some owners will lay off him, but I would be aggressive with my bid. White could be a league-winner.

Pacheco had the most carries by a Chief’s running back since week four. He established himself as the early down back against the Jaguars. Now, this is Kansas City and you can never be sure what Andy Reid is going to do, but there’s a good chance Pacheco continues to see double-digit carries going forward. In that offense, behind a top three offensive line, Pacheco has a lot of upside.

The Chiefs’ backfield is becoming as clear as John Stamos’ skin and McKinnon owns the third down/receiving role. He has eight targets each of the last two weeks. Kansas City throws the ball at the fourth highest rate in the league, so McKinnon should continue to get plenty of targets and provide a safe floor in PPR leagues.

Toney made a big splash in his second game with the Chiefs, catching four passes and scoring a touchdown. He went from playing on 9% of the snaps in his first game to 44% against Jacksonville. It’s unclear how much of Toney’s increased workload was due to JuJu Smith-Schuster exiting the game in the second quarter, but he will surely continue to see more opportunities going forward. Toney is a low risk/high reward player with elite potential for fantasy teams.

For one game, Watson made Packers fans forget about Davante Adams and, for a very brief half-second, we almost saw Aaron Rodgers almost smile. It was a magical day in Green Bay! Watson led Packers receivers in targets, receptions, yards and touchdowns. He was clearly ahead of Sammy Watkings, but Romeo Doubs and Randall Cobb were both out, so there are more receivers coming back who might cut into Watson’s target share. However, it’s more realistic Rodgers will keep feeding the rookie as long as he continues to produce. Watson has breakout potential the rest of the season.

No one was happier to see Matt Ryan return to the lineup than Campbell. In his last three games with Ryan under center, Campbell has 32 targets and a touchdown in each game. He’s a solid flex play as long as Matty Ice is starting.

The word is Beckham has narrowed his choice of teams down to the Cowboys, Bills, Chiefs, 49ers and Giants. I’m not buying the 49ers or Giants, personally and I think the Chiefs might be a little too crowded at WR, especially with Kadarius Toney there. That leaves the Bills or Cowboys and most folks seem to think Dallas has the inside track. Whichever team signs him, Beckham should make an immediate impact. Don’t wait another week to pick him up because he will likely not be available.

Kmet has five touchdowns on 11 receptions over the last three games. While that touchdown rate isn’t sustainable, it does show he has become Justin Field’s favorite red zone target. The Bears are averaging 30 points a game over the last four weeks and if they keep that up, Kmet will continue to see heavy volume near the goal line.

Moreau has done an adequate job filling in for Darren Waller and he has at least a couple more games as the Raiders starter, and possibly many more. It’s a tough matchup against Denver next week, so temper expectations, but Moreau can give you some consistency at a position that doesn’t have a lot of it.