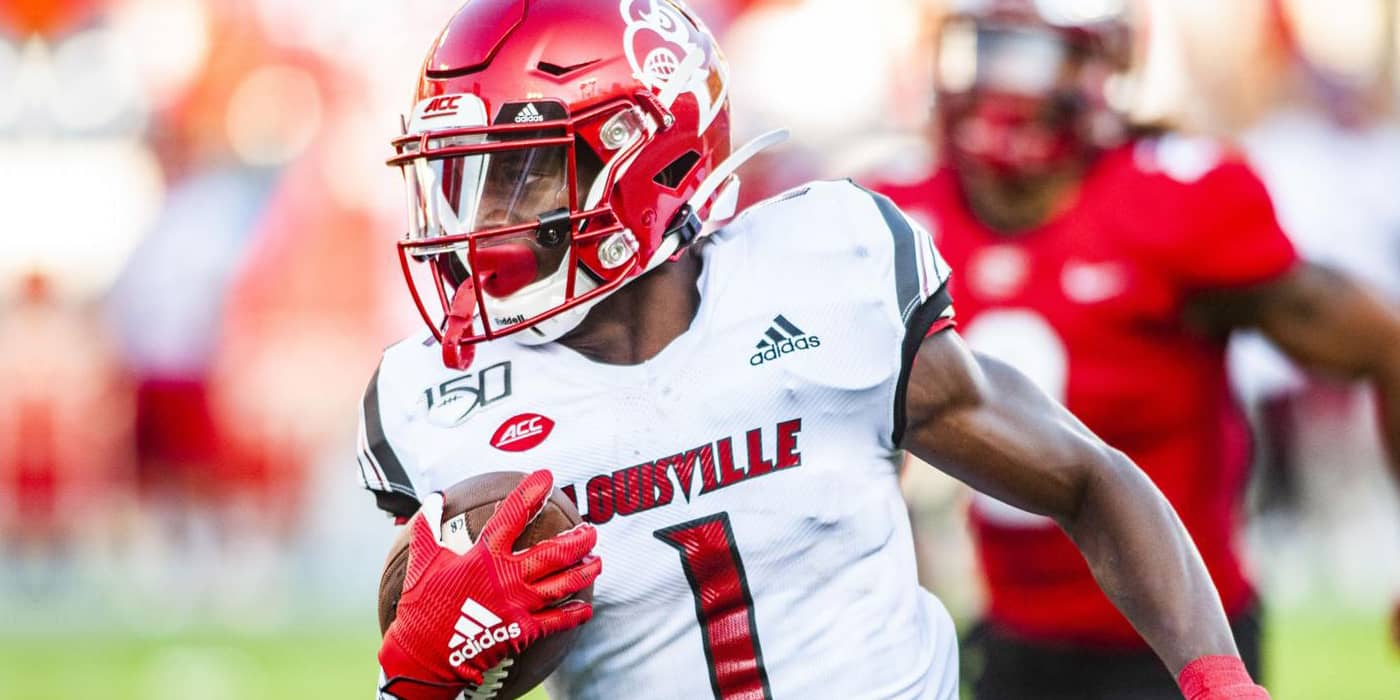 An interesting wide receiver in this year’s draft class that many people have started to get excited about is Tutu Atwell out of Louisville. In 2019, as a Sophomore, Atwell had a breakout season leading the ACC in receiving yards and touchdowns; he had 12 touchdowns for 1,276 yards on 70 receptions. He averaged 18.2 yards per receptions which is very impressive. Atwell is a speedy receiver that mostly lined up in the slot for Louisville, but with his pace, he could be used as a deep threat in the NFL. Atwell is a gadget-type player that can line-up in the backfield, slot, or on the outside and, with his skill set, could be a good addition to a team like the Chiefs, who like gadget players. He is also used on special teams, which makes him more valuable to a team and for fantasy as he has the potential to score right from the kickoff. Atwell should be a nice dynasty stash as I don’t think he will be a major factor this year, but he could become fantasy relevant if he lands with the right team who can improve his skill set.

Going into Louisville as a freshman, Atwell had never played as a wide receiver before. He was a high school quarterback who had a great record (over 1,500 rushing yards and over 4,000 passing yards in four years, per ProFootballNetwork), but Louisville turned him into a wide receiver. At the position, Atwell had 24 receptions for 406 yards and 2 touchdowns in his first year, averaging 16.9 yards per reception, which is very impressive for a guy who never played the wide receiver position before.

Tutu Atwell’s biggest strengths are his pace and agility. Atwell can burn defenders once in open space and can use his agility to make defenders miss tackles. Atwell isn’t a receiver that will bully cornerbacks, but he will use his speed to good effect and get into space. He also has big-play ability, and once he gets by a defender, he is tough to catch. Atwell reminds me a lot of Marquise Brown as both have similar frames, have pace to burn, and are exceptional after the catch. Atwell being a gadget-type player is another great strength of his, and he could be a fun piece to add to any offense. Even though he is only 5’9”, Atwell tries to play physical and isn’t afraid of contact when he’s running his routes. With his pace, agility, and versatility, Atwell is a player who could be a nice compliment for a team that already has a wide receiver 1.

Atwell’s biggest weakness has to be his size. His small frame is not exactly made for the NFL. He will come up against bigger and stronger corners, so he will have to rely on his pace and agility to get by defenders. Atwell will need to bulk up to be able to take the big hits that will come his way in the NFL. I’m not sure his 5’9” frame is made to carry a lot of muscle, which could be why many teams will overlook him in the draft. Due to his height and size, Atwell isn’t a player that will win contested catches. Atwell also had ball security issues, especially when he was tackled, so maybe bulking up will help him have fewer fumbles and drops in the NFL. Another weakness is his route running as it’s not always on point, and he can get covered easily by defenders, especially in the middle of the field. This probably doesn’t come naturally to him since he was a quarterback before college, but he can definitely work on this.

The wide receiver position in this year’s draft has the most talent, in my opinion, and the level of talent is the best I’ve seen for a few years. Atwell wouldn’t be at the top of my receivers list, but he wouldn’t be at the bottom either. In rookie drafts, I think Atwell could be a late second-round pick or early third-round pick, depending on the type of league you’re in. In one of my rookie drafts, I have two second-round picks, and I will definitely be on the lookout for Atwell with the latter of the two picks. You could do a lot worse than taking a chance on Atwell as I think he could be a nice player to stash for years to come, and he could be a solid wide receiver 2 in the future.

Whether Atwell comes good or not in the NFL will depend on where he lands come draft night. If Atwell was to land with the Chiefs or Packers, he could have a great chance to show his versatility and give teams a different dimension to their offense. The New York Jets might be another good landing spot for Atwell. Robert Saleh is now the Jets head coach, and he might want to get creative with his offense. The Jets don’t exactly have a lot of talent at the receiver position, so Atwell could have a chance to shine in their offense. For me, the best landing spots for Atwell would be the Chiefs or the Jets. The question is, do the Chiefs need another receiver like Atwell as they already have Tyreek Hill and Mecole Hardman, who are versatile and better versions of Atwell. But who knows? Andy Reid is known for being unpredictable, so he may want another gadget-type player to give his offense more options. Whoever ends up drafting Atwell will be getting an exciting player who could be a fun piece to add to their offense and offers a team a lot of versatility.

I’m from Dublin, Ireland. Moved to Toronto, Canada in 2018. I’ve been a big NFL fan ever since college. I’m a Seattle Seahawks fan. I play in dynasty and redraft fantasy football leagues and love writing and talking about football. I’ve only been writing regularly since last year but I’m gaining more experience with every article I produce. I can talk about football all day long so if you have any questions hit me up on Twitter at @SwampDonkey_90. Outside of football, I’m a big Leeds United soccer (football) fan. Being a Leeds and Seahawks fan provides lots of ups and downs but hopefully, my articles will provide the right balance of content.