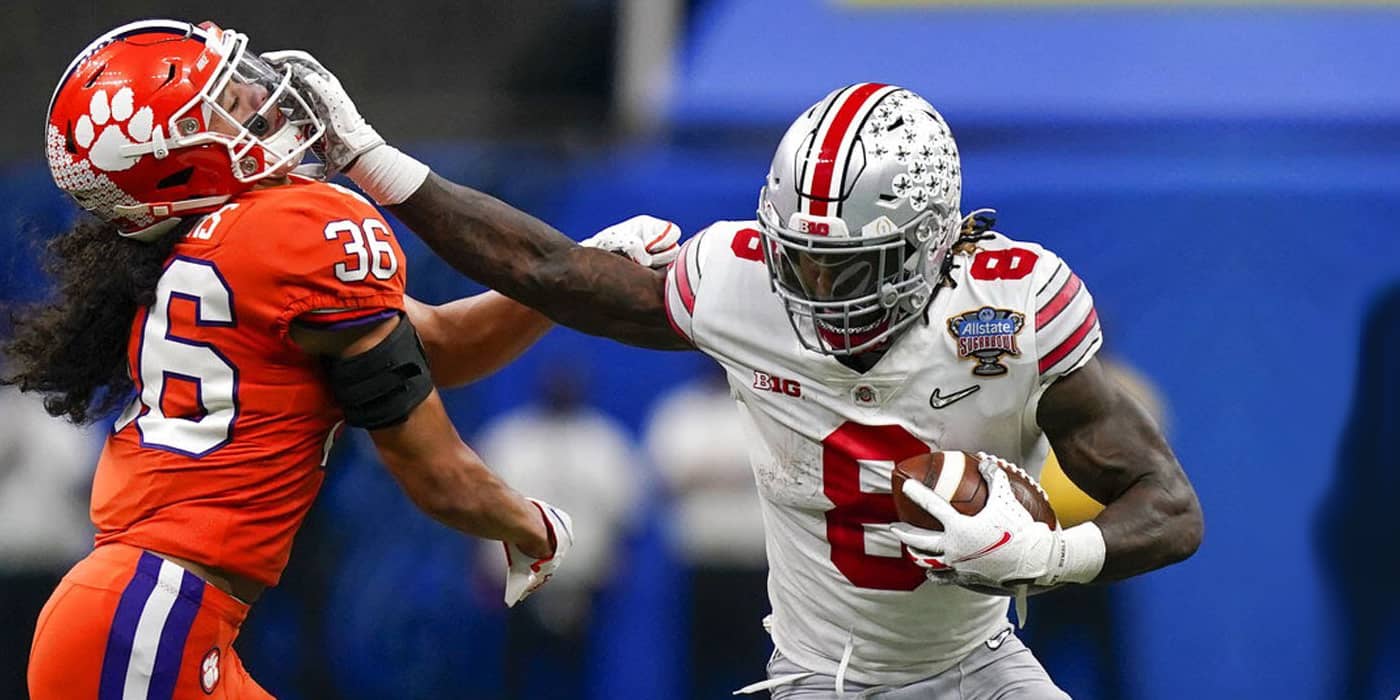 It would be hard to find a prospect who did more for his relative draft value over the final month of the college football season than Trey Sermon. A graduate transfer from Oklahoma, Sermon was expected to push, and eventually overtake incumbent red-shirt sophomore, Master Teague in the Buckeye’s backfield. But through the first half of the season, it was Teague who looked like the better back. Then in early December, Sermon exploded over a three-game stretch. First for 112 yards and a score on ten carries against Michigan State, and then, when Teague was lost early on in the Big Ten Championship game to injury he shredded a good Northwestern run defense for 339 yards and a pair of touchdowns on 29 carries. The follow-up act in the College Football Playoff saw Sermon log 31 carries for 193 yards and a score, and add four receptions for 61 yards in Ohio State’s upset win over Clemson. Unfortunately, he sustained a shoulder injury on his first carry in the BCS Championship Game, and with that, his season was over. Nonetheless, it was an eye-popping final stretch of games in which Sermon averaged better than nine yards per carry, running over, around, and often through would-be tacklers.

While some point to the small sample size of his 2020 breakout, we’re still talking about a player that was highly productive throughout his college career, rushing for over 2000 yards while at Oklahoma and averaging better than six yards per carry in his three seasons there. His challenge in that program was always Lincoln Riley’s committee backfield approach combined with quarterbacks like Kyler Murray and Jalen Hurts soaking up rushing attempts as well. Still, when allowed to shoulder the load, Sermon has always delivered. In fact, across the ten college games where he received 16 carries or more, Sermon averaged over 139 rushing yards and a touchdown per game for his career. And even if we remove the big 2020 finish against Northwestern and Clemson, he still averaged 103 yards and a touchdown over the remaining eight games in which he saw at least 16 or more.

From a skills standpoint, Sermon is as pro-ready as any back in the draft, and his ability to handle all facets of the game should lead to an opportunity for early playing time. While he may not profile as a feature back, he will likely get an opportunity as an early downs rusher and has the potential to fill in as a three-down back for small stretches of the season if needed. While no single aspect of his game is exceptional, he’s a physical runner that does so many things well that I think at least a few teams will consider him a viable selection late in Day 2 pick.

Sermon is a strong downhill runner whose best fit is likely in a zone-blocking scheme. He shows both patience and decisiveness behind the line of scrimmage and wastes little time getting upfield when a crease presents itself. While he lacks elite long speed, Sermon is a very efficient runner with excellent contact balance and the ability to manipulate defenders in space. And if all else fails, he’s also perfectly willing to run them over. He’s not afraid to initiate contact and regularly utilizes an effective stiff-arm to dispatch would-be tacklers. He can thrive on volume and his violent running style noticeably took its toll on defenses late in games. Despite that style, ball security is not an issue and Sermon never fumbled away a college carry. Though far from smooth or polished, he is a capable receiver and also excelled in blitz pickup, a trait that will help him get on the field early in his career. Other than his physicality as a runner, nothing really wows, but there are also very few holes in his game.

What you see with Sermon is what you get. He lacks an elite athletic profile so there’s not a lot in the way of unrealized or untapped potential to bank on in the long term. Although adequate as a receiver, he will not threaten defenses downfield in that capacity and is more of a screen, swing pass, or hot receiver option. While his aggressive running style helped garner a reputation for punishing defensive backs and linebackers in college, that willingness to embrace contact could take its toll at the next level. There are also some concerns about his upright running style, and he’s never come close to 200 carries in a season and totaled just over 500 touches for his college career. The low carry totals can be seen as a double-edged sword in that, while he enters the league without suffering a ton of wear and tear, he did miss time as a junior at Oklahoma with a knee injury and as previously mentioned, was knocked out of the BCS Championship after sustaining an injury to his shoulder. That means despite not being a true bell-cow back, his last two college seasons both came to an end due to an injury.

Sermon’s short and long-term fantasy prospects will be more heavily tied to his landing spot than perhaps any other back in the draft. Without question, he’s at his best as a one-cut runner who wins at the second level with superior vision and balance, and when all else fails a willingness to initiate contact and try to run through tacklers. His initial fit is likely as an early downs rushing option in a committee backfield and he should have a chance to threaten double-digit touches each week in that scenario. That said, he does have some handcuff value since he is capable of handling a three-down role as a spot starter. His strong track record in pass protection and ball security should lead to early reps and give him a bit of a safe floor, even as a rookie.

To me, Sermon gets interesting very fast if he lands in a backfield with a muddled pecking order or without a proven starter. He does so much well that the sum of what he brings to the table may be enough to earn him the lion’s share of the touches over guys with more playmaking ability, but also more warts. We’ve seen that scenario play out time and again in the NFL, and Sermon’s willingness to do the little things could endear him to a veteran head coach that favors a running back with a mean streak who won’t leave yards on the field and shows the willingness to sell out to protect his quarterback. There’s enough here to like that if he lands in a favorable spot I expect we’ll see Sermon start rocketing up first-year player draft boards.