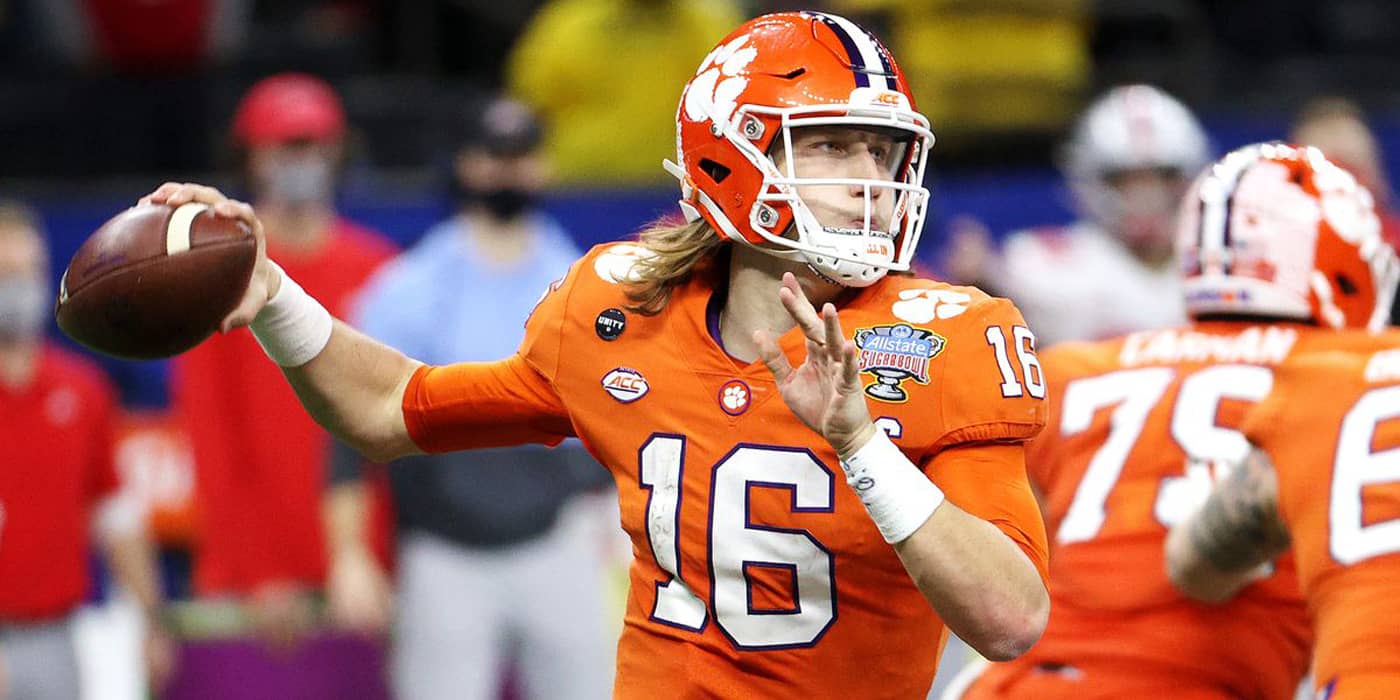 All hail the presumed #1 overall pick in 2021 and the best quarterback prospect since Andrew Luck. Trevor Lawrence is projected to be the new starting quarterback for the Jacksonville Jaguars and for good reason. Lawrence has started three seasons for Clemson and led them to a National Championship. He is 5th all-time in passing yards (10,098) and 3rd all-time in passing touchdowns (90) in the ACC. Lawrence combines elite physical attributes, football IQ, and intangibles that make him a day one starter in the NFL. Lawrence has been the unanimous first overall pick for months in mock drafts and every draft guide for the year. He has one of the best arms that we’ve seen in recent history and his legs afford him the ability to make other plays happen too. He does need to grow when it comes to his progressions as a passer, but Urban Meyer and co. are going to be thrilled to land this gem.

Most of us have seen the highlights of Trevor Lawrence and what he can do, but what we lack is looking at the subtle nuances of his game that truly make him an elite prospect. Lawrence has a huge arm and possesses the ability to make accurate throws at all levels of the field. It doesn’t matter if he’s standing in the pocket or running outside of the pocket, he will make the throw. Not only will he just make the throw, but it will also be just as accurate of a pass if his feet were planted and he was standing still. The arm strength of this young man is extraordinary and the NFL is going to be more exciting with him in.

Speaking of Lawrence running outside of the pocket, so many of us forget that he is actually a very athletically gifted quarterback that has the ability to scramble and make plays with his legs. During his career at Clemson, he averaged 4.1 yards per carry for a total of 943 yards. Obviously, Lawrence is more known for his arm, but his athletic ability and extended play-making ability that he creates with his legs is phenomenal. He may not be the best mobile quarterback in this class, but do not put it past him to rush for a decent amount of yards in the NFL.

One of the best gifts that Lawrence possesses is his expanded football IQ. It’s clear that he possesses all of the physical traits of an elite quarterback, but as we’ve seen, you must also incorporate a sound football ideology. Think of Tom Brady when you think of football IQ. The reason why he is so great is not that he is the most physically elite quarterback, but that he knows what to do in every situation and seemingly makes plays happen out of nowhere. Now I’m not comparing Lawrence to Brady, but they both have great football minds. Look for Lawrence to continue employing this in the NFL.

Lawrence is the best prospect in this class and probably the best quarterback prospect we’ve seen in a long time, but he does have his downsides and weaknesses. While he can make essentially every throw at any level, he tends to lock himself into one receiver on each play. He lacks the ability to go through his route progressions and will wait for one receiver to get open instead of trying to find another passing lane to a different player. This is something that can be refined in the NFL, but it will need to be worked on and improved quickly. Defenses in the NFL can lock onto a QB’s eyes much better than college defenses can.

Trevor Lawrence is 21 and already sounds more well-adjusted and mature than most adults I know https://t.co/KHV5vSfq5R

Trevor Lawrence is all, but a lock for the #1 overall selection in Cleveland this year and Jacksonville fans will be thrilled to see him don the Jaguar cap. While he has the ability to be great, we must temper our expectations a little bit for year one as rookie quarterbacks are not generally that productive in their first year (obviously there are outliers like Justin Herbert). There are still a lot of holes on this Jaguars team and drafting the best QB is not going to fix this all overnight. Lawrence has the ability to be a top quarterback in the NFL, but he might be a year or two away from truly showing this.