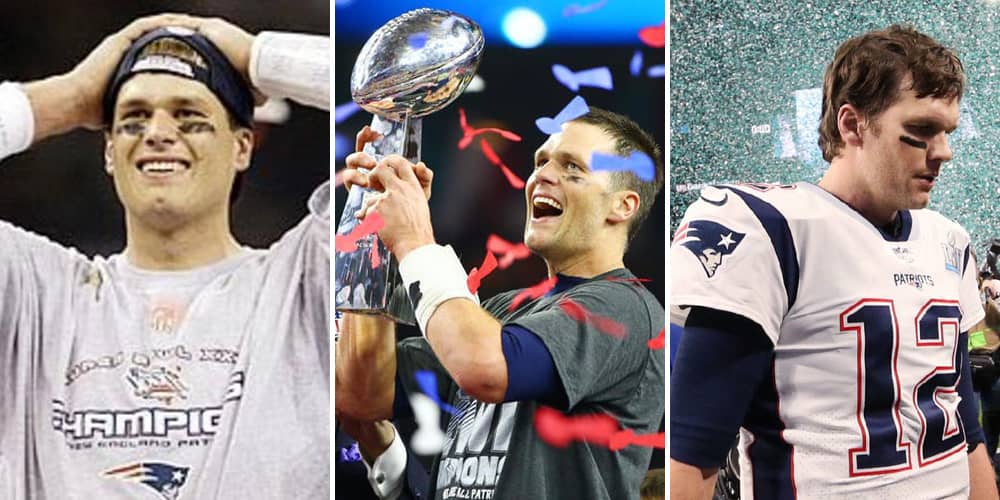 For many members of the Tampa Bay Buccaneers organization, the next two weeks will be a whirlwind, unlike anything they have ever experienced before. From the macro-level, such as preparing their gameplan and ensuring they maximize their performance, to the micro-level, such as what to wear on the big day and taking in the moment; there will be plenty of staff and players alike who will be searching for guidance and reverence.

But there is one man in Tampa Bay who is quite familiar with how to prepare for Super Sunday. In fact, this player has been to the Super Bowl roughly 48% of his seasons in the NFL and has won this game more than anyone in NFL history.

Since entering the league in 2000, Brady has been a dominant force in the postseason, holding a majority of playoff statistics throughout the league’s record books. Though many doubted him after departing from New England, he continued his commanding ways in 2020 as Brady has led the Buccaneers to their second Super Bowl in franchise history. With this being his tenth Super Bowl appearance, many are wondering about his legacy, especially as a Super Bowl participant. With so many memorable moments, it is worthwhile to take a look back at his previous performances and see which ones stand out for him individually as he approaches Super Bowl 55.

Here are the best Tom Brady Super Bowl performances, ranked from nine to one.

In 2007, the New England Patriots had shattered many records en route to Super Bowl 42, most notably in the win column. The 2007 Patriots are the only team in NFL history to finish with a 16-0 regular-season record and won the most games in one season (18) of any team in history. But, there is a reason this team does not stand out as the clear-cut greatest team of all time. Much like the 2016 Golden State Warriors, New England was not able to finish things in the championship round after a historic season, losing Super Bowl 42 to the New York Giants 21-17.

This loss was a shock to many, as Brady and the Patriots were considered by many to be a shoo-in to complete the perfect season and seal their fate among NFL greatest squads. However, New England was unable to come away victorious and suffered the first Super Bowl loss of the Brady/Belichick era.

When you look at Brady’s numbers, he finished with 266 passing yards and one touchdown on a meager 60% completion percentage. While there were some elements outside of his control (namely Eli Manning’s exceptional performance, proper preparation by the Giant’s defensive staff, and the Helmet Catch), Brady simply did not do enough to win this game, especially when you consider the talent he had around him and the level he played at throughout that season. Given that it was both one of Brady’s worst statistical performances on Super Sunday and one of the biggest losses in his career, Super Bowl 42 locks in at the #9 spot.

Given the power of hindsight, this game should have been a much larger spectacle for Patriots fans at the time. It had been a year since rumblings had begun about a potential issue going on within the organization regarding Brady and the rumors that he would be considering playing elsewhere had not begun in earnest yet. Obviously, Brady and New England both went their separate ways this past offseason and they both had to begin figuring life without the other.

But, before this messy divorce, there was one final shining moment as New England won Super Bowl 53 in a gritty, defensive battle with the Los Angeles Rams. This win would mark the final postseason victory for Brady as a member of the Patriots as they were knocked out in the Wild Card round in 2019. Brady was able to hoist the Lombardi Trophy despite having his lowest passer rating in his Super Bowl career (71.4) and not scoring a touchdown himself, the only time he has done that in a Super Bowl to date. Brady was able to manage the game and lead his team to victory but did not do so with the same vigor and dominance we had seen in years past, slotting Super Bowl 53 at #8 on this list.

After suffering the longest Super Bowl drought of his career (a long four years for Patriots fans), Brady got another chance to face the team that had bested him in 2007 as the Patriots once again faced off against the New York Giants. Super Bowl 46 started with an odd play by Brady, who was called for a safety on New England’s first offensive play of the game. This error swung momentum in favor of New York early but New England was able to jump out to an 11 point lead in the third quarter thanks to two touchdowns from Brady.

Unfortunately, they would not be able to sustain their lead and Brady had now lost his last two Super Bowl appearances. Many wondered if he and the Patriots would ever win another championship as it appeared their window was beginning to close. We now know that was far from the truth, but this loss is still a significant one in terms of Brady’s overall Super Bowl legacy. It showed he would need to improve his game if he wanted to add to his ring collection and the team around him would need to change as well. Based on his pedestrian numbers and the outcome of this game, Super Bowl 46 lands at #7.

Before he was subject to the gut-wrenching experience of Super Bowl 52, Brady faced off against Philadelphia in a game that saw Brady win his third championship in four years. He played a solid game, throwing for 236 yards and two touchdowns, which was not as outstanding as some of his other games but it was surely enough to win. He was supported heavily by the Patriots defense, who forced four turnovers and gave Brady excellent field positioning all game. This Super Bowl stands out for many reasons outside of Brady, which will keep it outside of the top five on this list.

As we begin the top five, we begin with a Super Bowl that is memorable for one major decision, overshadowing what was an exceptional performance by Brady.

Brady threw for four touchdowns in Super Bowl 49, his personal record currently, and accounted for all points scored by New England in the game. While his two interceptions in the game are also his most thrown in a Super Bowl, Seattle was only able to turn them into seven points so their damage to New England’s were minimal. This game was also likely important to Brady on a personal level, as he was able to shed the losing ways he had suffered in his two previous Super Bowl trips and surely did a lot to revitalize his career.

While this Super Bowl will always be debated/discussed amongst NFL fans, there is no doubt that it was a great game for Brady and slots in as his fifth-best Super Bowl performance.

In just his fourth season in the league, Brady would begin to seal his fate as one of the best postseason quarterbacks of all-time. During Super Bowl 38, Brady become one of three quarterbacks (at that time) to throw for over 350 yards in a Super Bowl (Kurt Warner in 2000 and 2002 and Joe Montana in 1989) and was able to throw three touchdowns all while maintaining a 67% completion percentage. He also helped lead the Patriots on another of his trademark game-winning drives, but this time got a lot of help from Carolina Panthers kicker Jon Kasey.

This win along with another solid statistical performance puts Super Bowl 38 at the #4 slot on this list.

A year after completing their miracle comeback against Atlanta, New England was unable to secure back-to-back championships as they lost to the Eagles in 2018.

While this game did not turn out in Brady’s favor, it was still a remarkable performance for him. He set the Super Bowl record with 505 passing yards and posted his best quarterback rating (115.4) to date. His three touchdowns helped keep the Patriots in this game, even as they lost their best wide receiver, Brandin Cooks, early in the second quarter. It would have been interesting to see if his speed and field-stretching abilities would have changed the outcome of this game, but Brady had to work with what he had as the Eagles played magnificently on offense, scoring seemly at will.

Statistically speaking, this is Brady’s finest Super Bowl performance to date but when you factor in the outcome of the game, Super Bowl 52 slides down to third place on this list.

For many, due to his low draft status and mediocre college numbers, there was a lot of dread and doubt in New England when Brady took over for Drew Bledsoe after suffering a chest injury early in the 2001 season. Brady was a relatively unknown quarterback at the time and fans were quick to assume he would lead them to another forgettable season the franchise was known for then.

Little did they know this would be the beginning of the greatest run for a franchise in league history.

Brady not only led the Patriots to their first playoff berth and double-digit win season in four years, but he would also go on to get them to their third Super Bowl in franchise history. Super Bowl 36 had New England squaring off against a formidable St. Louis Rams team that had just won the Super Bowl themselves in 1999. It looked like St. Louis would take this game as well, overcoming a second half 14 point lead for New England.

But, from his own 17-yard line with 1:21 left to go in the game, Brady branched out and showed us all a glimpse of his greatness that the rest of the NFL would be subject to for years to come. Brady executed one final drive by going 5-5 (excluding spiking the ball to stop the clock) for 53 yards to set up Adam Vinatieri for the second game-winning field goal in Super Bowl history (the only other at that point was in Super Bowl 5 by Colts kicker Jim O’Brien). Overall, Brady posted 145 passing yards for one touchdown but his final drive along with the significance of this win puts Super Bowl at #2 on this list.

If you follow the NFL at any level, chances are you have heard at least one reference to 28-3, most often as a joke at Atlanta’s expense.  But, for all the great content that has been crafted surrounding those numbers, it would have not been possible without the play of Brady in one of, if the, greatest quarterback performances in Super Bowl history.

With his team down by 25 points with 8:31 left in the third quarter of Super Bowl 51, Brady led his team on a barrage behind his 284 passing yards for two touchdowns and one two-point conversion. While we should not forget the valiant effort by James White in this game, who finished with 29 rushing yards and two rushing touchdowns (including the game-winner in overtime) on six attempts along with 14 receptions for 110 yards and one touchdown, this entire comeback is not even feasible without Brady’s leadership and outstanding performance in the second half. Completing the largest comeback and creating one of the most memorable moments in Super Bowl history locks Super Bowl 51 as Tom Brady’s greatest Super Bowl performance to date.