Once Tom Brady was released from the leagues stranglehold and allowed to play in the 2015 NFL season opener, we saw an immediate impact in fantasy drafts and sports betting gamelines in Las Vegas. Brady is one of the games elite QB’s but when he’s pissed off, he might very well be the best quarterback the NFL has ever seen. “Angry Brady” gets things done.

I’m not sure what you expected when this game was dubbed the NFL season opener, but as the 2015 year inched closer and closer to kickoff, you shouldn’t have been all that surprised.

I’m not going to recap “deflategate” for those of you who were in a football-coma the last eight months, but I did link to it’s own 5000+ word Wikipedia page just in case you’re up late and can’t sleep.

Once Tom Brady was released from the leagues stranglehold and allowed to play in the 2015 NFL season opener, we saw an immediate impact in fantasy drafts and sports betting gamelines in Las Vegas. Without a doubt Brady is an elite QB, but when he’s pissed off, he might very well be the best quarterback the NFL has ever seen. “Angry Brady” gets things done. If Tom was an Avenger he’d morph into a blue version of the Hulk with a thick Boston accent that would throw rocket touchdown passes at evil doers.

Brady kicked off the NFL season with a near perfect game, completing 78.1% off his passes (25/32) for 288 yards and four touchdowns. His focus was amazing. You could tell that this was a game that he’d been wanting to play in for months. I’m sure his motivation was fueled by his hatred for Rodger Goodell and for being constantly being told he looks like Matt Damon (classic video below)

No Excuses… Okay Just One 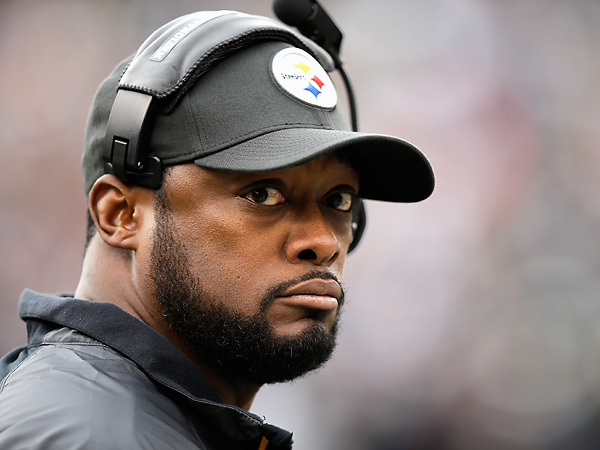 Pittsburgh Steelers head coach Mike Tomlin wasn’t thrilled with his team’s performance in Thursday’s 28-21 loss to the Patriots, yet he wasn’t happy about the headset communication problems at Gillette Stadium either.

“We were listening to the Patriots’ radio broadcast for the majority of the first half on our headset,” Tomlin said, pointing out that radio problems are “always the case” in Foxborough.

“We had a lot of problems,” Belichick said. “We had to switch microphones a couple times. Our communication system was not very good.”

Belichick said it was a problem all night and the officials told him they were on the verge of shutting the communication system down, but didin’t.

There’s a reason why we took Brown in the first round of our fantasy drafts. The guy is unstoppable. If you’re in a PPR league and have Antonio Brown you should never be let down. Brown saw 11 targets and hauled 9 of them in for 133 yards and a (pity) touchdown.

Nice Defense Pittsburgh. How does that even happen? You’d think every play against the Patriots would go something like this:

“You cover Gronk, I’ve got Edelman, Safeties be ready”

At least line up near the guy, don’t just hand them free scores.

Yes he’s still in the league, and might show up on our Waiver wire article next week after Markus Wheaton had a very shaky night snagging only 3 catches on 7 targets. Wheaton let a couple get away from him that could have change the outcome of this game.

His face says it all.

What do you want to bet that someone in that stadium wanted a flag. You can sack Brady, it is allowed people.

5. Heyward-Bey is out of bounds on a Easy TD catch

I really can’t believe I have two videos of Heyward-Bey in this article. Nevertheless, this was a big moment in the game. If Heyward-Bey had just wore one shoe size smaller or been aware of where his feet was the score at halftime would have been completely different.

Amendola didn’t do much in the game, but this was a nice throw and catch. Brady dropped this into the bucket.

3. The Gronk Shimmy and Spike

-Fantasy owners with Gronk in their lineups week one are like drunk guys, they love everyone and everything.

-Fantasy owners against Gronk week one have at some point:

Big Ben makes it look so easy. With a flick of the wrist the Steelers gain 33 yards. There we’re so many simple -yet huge play- grabs from Brown like this one, it was hard to pick a favorite. I love how this play developed.

This wasn’t Rob Gronkowski’s third TD, but it might as well had been. Gronk was in the right place at the right time all night. They went upstairs to review this TD and it was ruled that the ball was down on the one yard line. The Pat’s went back to Gronk on the very next play, seen here