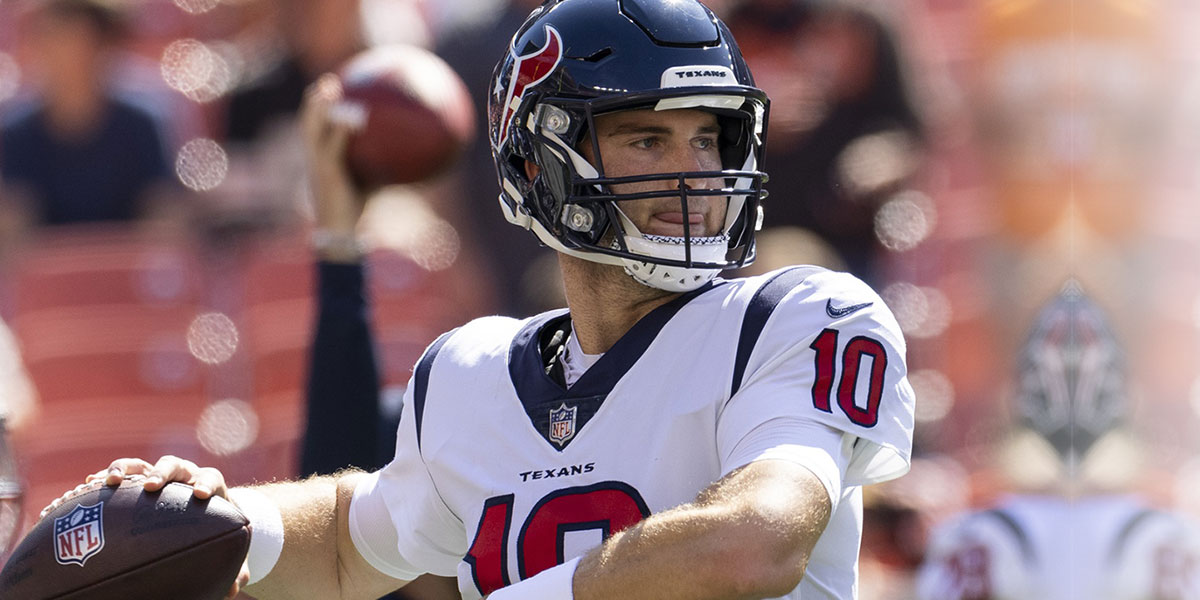 On Thursday Night, we will see a matchup of two of the youngest franchises in the NFL (both teams started in 1995 and 2002 respectively) as the Carolina Panthers face the Houston Texans. These franchises have only played each other five times in their relatively short history and this game will be the first one on TNF. Both squads are tied for the lead in their respective divisions through Week 2 and will look to keep that momentum going on Thursday Night Football.

Carolina will enter this game as more than a touchdown favorite over Houston. The Panthers haven’t been favored by a margin that size since Week 13 of the 2019 season when they were favored by 10.5 points over Washington. This 7.5 point spread says just as much about Houston as it does Carolina, however. Though the Texans have shined in some moments this season, there have also been plenty of times where they have looked like one of the bottom-tier teams in the league (such as their egregious punt decision in Week 2). Carolina should get out to an early lead in this game and maintain it throughout the evening, making a bet on the Panthers and the spread a solid choice for Thursday Night. Based on the injury status of the Texans and having to install a new rookie quarterback on a short week, betting the Under is a safe bet as well.

Over this past offseason, the Panthers made a big-time trade to snag a young struggling quarterback and see if they can rehabilitate him under their coaching and structure. So far this season Sam Darnold has looked great in Carolina, throwing for 584 yards on a 68.5% completion percentage for three touchdowns and one interception. One aspect that is helping Darnold in 2021 is his deep passing game. Darnold has averaged eight yards per pass attempt, which ranks in the top twelve in the NFL through Week 2. Darnold is also in the top half of the league in other important statistical categories such as yards per completion (thirteenth in the league) and net yards gained per pass attempt (eleventh in the league). Look for Darnold to continue to improve and make himself a solid streaming option for Thursday Night.

Last week, Tyrod Taylor started the game hot and looked like his 2015 form once again. He led the Texans on two touchdown drives in the first half before suffering a hamstring injury that will force him to sit out this week’s game and beyond. Taylor was placed on injured reserve on Tuesday, placing the fate of Thursday Night’s game in the young hands of Davis Mills. Mills will, unfortunately, get a short week of practice before facing the Panthers, who have had a solid passing defense to start this season. They have allowed the second-fewest passing yards through Week 2 and led the NFL with 10 sacks. Mills will have a tough matchup in his first career start and should be left on your bench/waiver wire this week.

One of the most frustrating situations about playing fantasy football is having to rely on a running back who is part of a committee. A lot of teams have shifted their strategies in recent years and use multiple running backs to fit their strengths as the true bell-cow running back becomes rarer to find these days, but the committee used by the Texans is especially confusing for fantasy managers to decipher. Mark Ingram, David Johnson, and Phillip Lindsay are the three main running backs in Houston and so far through Week 2, they have seen roughly 20 snaps each with Ingram leading the way at 28 per game and Lindsay seeing 17 per game. This parity has led to diminished fantasy relevance for the trio as only one back has finished a week in the top 20 in 0.5 PPR scoring formats (Ingram finished as the RB17 in Week 1 but he also saw over 46% of all the running backs snaps that week). All three running backs are a scary option in Week 3 as it seems like their roles in the Houston backfield are still being fully worked out and are subject to change at any moment. Ingram would be the best option to start if need be, but he along with Johnson and Lindsay should be on your bench/waiver wire for Thursday Night.

It goes without saying that Christian McCaffrey is one of the best fantasy football options on the planet. His abilities both in the ground game and as a receiver are astounding and are a sight to behold every week he is active. He will be in a great spot this week as the Texans were gashed last week by Cleveland’s backfield (Houston allowed 151 all-purpose yards and one rushing touchdown in Week 2) and will be on a quick turnaround based on the shortened week of practice. Expect a top-five weekly finish from McCaffrey this week.

Outside of McCaffrey, the two top receiving options for Carolina so far in 2021 have been D.J. Moore and Robby Anderson. has been especially good as he is currently the WR18 (in 0.5 PPR scoring formats) through Week 2 and has been a consistent downfield target for Darnold. Anderson has been more of a boom-or-bust player in 2021, finishing Week 1 as the WR33 before plummeting down to WR64 in Week 2. Moore is a solid option for Thursday Night and should put up a WR2 level performance with WR1 upside based on the matchup. Anderson, however, is more of a lottery ticket option that can be started but has enough risk to make fantasy managers nervous.

One of the lone bright spots for Houston from a fantasy perspective this season has been the resurgence of Brandin Cooks. Cooks is the WR10 so far in 2021 (in 0.5 PPR scoring formats) and is on pace to meet, if not exceed, his 2020 numbers. Cooks leads the team in targets (21), receptions (14), receiving yards (210) and is tied for the lead in receiving touchdowns (1). He is far and away the best receiving option for Houston and has made the most of the work he has seen through Week 2. While the Panthers’ secondary has been good against opposing wide receivers to start the season (allowed the seventh-fewest fantasy points to the position group based on scoring format) Cooks is in a place where he is relied on so much he will see enough targets to give him a solid floor, even if the matchup caps his upside. Look for Cooks to finish with a WR2 level performance on Thursday Night.

Both starting tight ends in this matchup have yet to make themselves fantasy-relevant through Week 2. Dan Arnold for Carolina and Pharaoh Brown for Houston have yet to see double-digit targets this season (seven and six respectively) and neither player has factored into their team’s offensive gameplan to start this season. Outside of a deep tight end-premium format, both Arnold and Brown should be left on your bench/waiver wire this week.

The Panthers’ D/ST unit has been a solid option to start the 2021 season, ranking within the top five best units in the league (depending on scoring format). Now, these numbers are made easier to obtain when facing the rebuilding New York Jets and a turnover-prone New Orleans Saints team but it should be noted how much of an improvement this defense had made since last season. They are getting solid pressure on opposing quarterbacks (lead the NFL in quarterback pressures and sacks) and are taking advantage of that pressure in several ways (tied for second in the NFL with four interceptions and are the only team in the league to allow less than 100 yards rushing through Week 2). If you have a chance to start the Panthers’ D/ST this week, look for them to put up another great performance on Thursday Night and make a huge impact on your starting lineup.

While both of these teams are currently rebuilding/retooling, one is clearly further along than the other. Carolina has an advantage in almost every spot on the field and will look to show off that talent on Thursday Night. The Panthers have a defense that will force the Texans to make mistakes and they have the running game to control time possession, giving Houston limited opportunities to make a comeback in this game. I have this game going to Carolina by a score of 31-10.