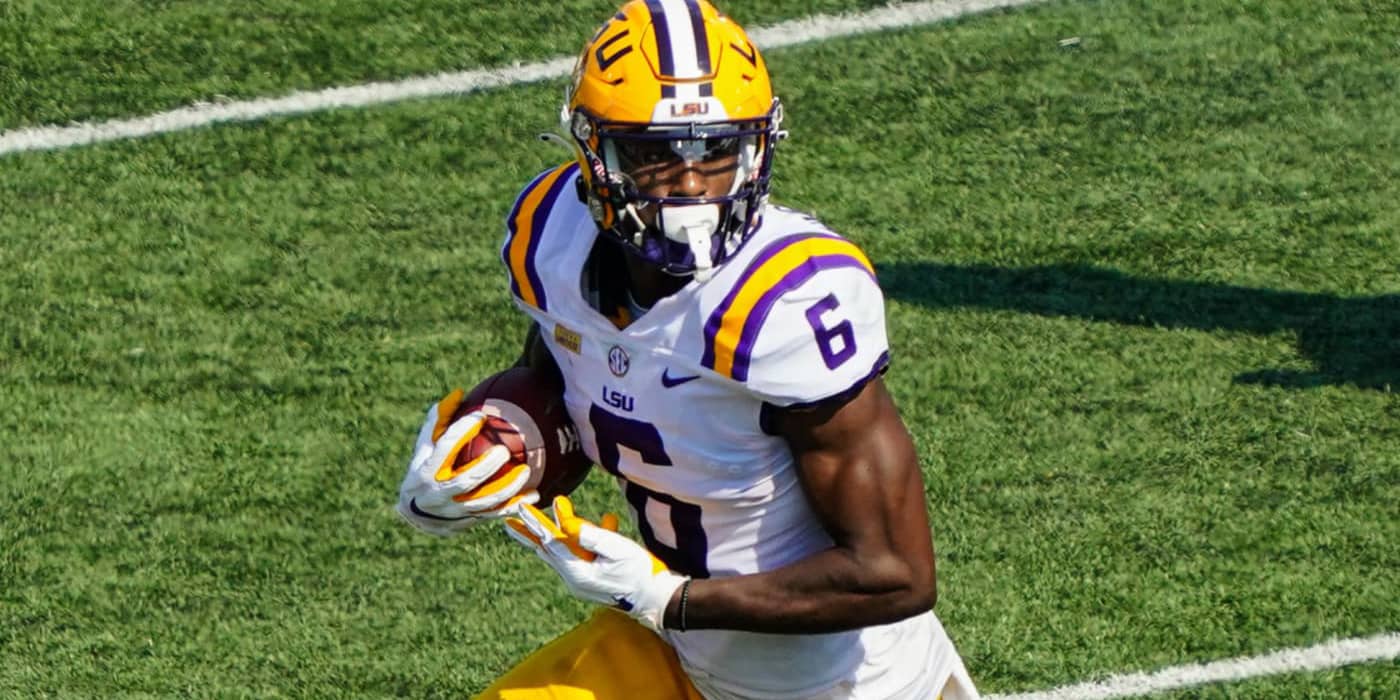 The 2019 receiving group at LSU was extremely deep. Blessed with last year’s rookie sensation Justin Jefferson, Ja’Marr Chase (a projected top 10 pick in this year’s NFL Draft), and Terrace Marshall Jr., a talented big target wide receiver that might be flying under the radar. Marshall made his presence known in 2019 as he posted a 46-671-13 line and most of this was from the slot. Marshall has the technical ability to work in the slot or out wide which speaks to his route running prowess. His ability to high-point the ball and physicality allow him to bully a plethora of corners. Throw in his run after catch ability and you’re looking at a bonafide star in the making at the next level.

One of the best things about Marshall is his ability to line up either in the slot or out wide. Marshall is a big-bodied receiver who is surprisingly quick for his size. When you watch tape of him, you see how technically sound his footwork is. When you combine the technical side of things with his agility and quickness, it’s not hard to see why there is so much separation between him and the nearest defender. Even if there isn’t a lot of separation that is created, you can see why he was a favorite target of Joe Burrow in 2019 as his frame allows him to outmuscle nearly any defender that he lines up against. When he is battling for the ball, his body control allows him to win nearly every single jump ball he goes up for.

Something that I did not believe was that great until I sat down and watched his tape was his route running. It seemed like all he did was run slants, drags, or very soft routes. However, this is not the case. The key here again is his feet. When you watch his feet, you’ll see how much technique and refinement go into how he runs his routes. His upper body may not show it, but his legs never stop moving and this is key when you are trying to get open and stake your claim as one of the best receivers in the country. While he may need to improve his route running slightly, having someone as athletic and technically sound as Marshall makes this whole process much easier.

Another thing I absolutely love about Marshall is his physicality as a receiver. So many times we see these guys give up on a play so they don’t get tackled or they don’t like running across the middle. This is not the case for Marshall. He struts across the middle of the field like he owns it and is willing to dive in any direction for a pass. The best part of this is that this is before the ball is in his hands. Once the ball is in his hands, he’s an absolute menace. He’s incredibly hard to bring down and will fight for every single last yard that he can. As I said, this man fears no one and is willing to go toe to toe in any situation to ensure that he gets the ball.

Where there are great attributes of a player, there are always things that bring down their value. For example, Marshall’s size causes him to be just a bit slower than other receivers that are coming out of this class. You’d think that this would lend him to not being hurt as much either, but unfortunately, he did get hit with the injury bug in 2019. Drops can be a common concern for a lot of receivers and Marshall is no different as he did experience a case of the yips in regards to securing the ball when it was thrown his way. A lot of these concerns are just bad luck and will likely cause him to fall on draft boards come April, but that shouldn’t deter you in your fantasy drafts.

Marshall isn’t restricted to a singular scheme and will thrive in any situation that he is thrust into. Need a deep threat on the outside? Marshall is going to go up and get it and use his footwork to beat most corners. Need a slot presence? Marshall’s big frame and agility allows him to get open and make plays after the catch-off quick routes. Marshall has the ability to be a huge presence as a legit #1 receiver or could settle into a nice complementary role. I’m thinking Tennessee, opposite of A.J. Brown or Washington as a nice complement to Terry McLaurin. Truthfully, whoever drafts Marshall is going to be getting a steal and you should be looking to do the same in your drafts.