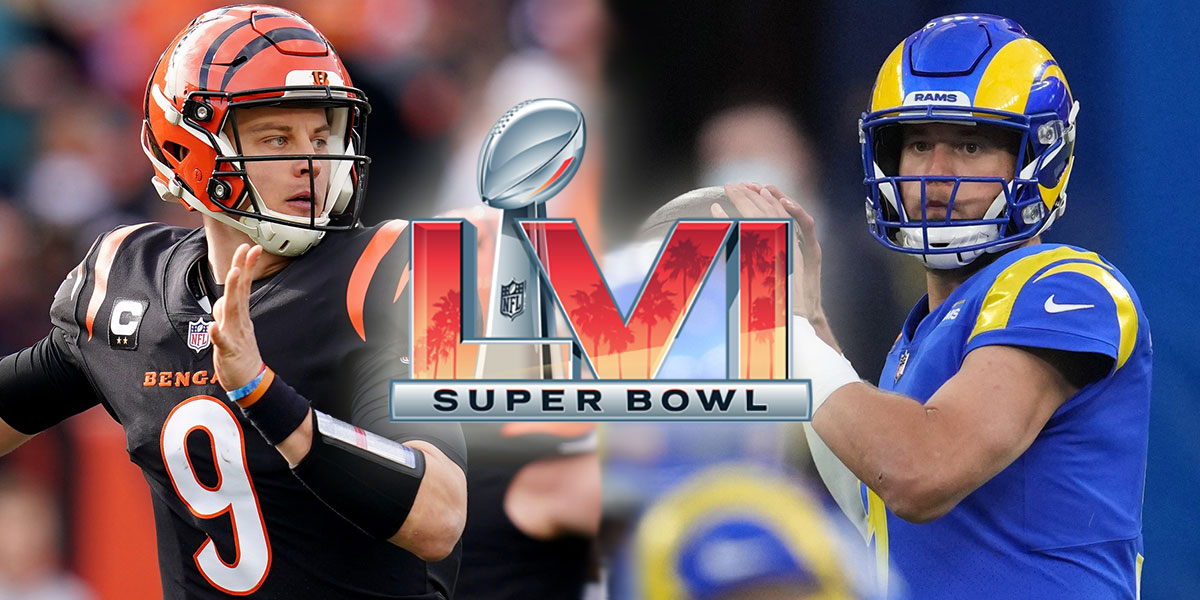 This season, I’ll be providing my picks every week for you, our readers. I’ve been Gridiron Experts’ Pick ‘Em columnist for the past few seasons, and I’m glad to be back at it again! We’re hoping to have even more success this year! Each week, I’ll give you my picks for the Sunday games, and a short write-up centered around the key reason why I’m making the pick that I am. You can also click over to see all our Free NFL picks for the week with more than a dozen Gridiron Experts picking each game.

I’m not quite sure anyone predicted this matchup, but football can be poetic sometimes. In his 13th season, Matthew Stafford left Detroit to become a Los Angeles Ram, and here he is– favored in the Super Bowl. On the other sideline, the young phenom Joe Burrow has led Cincinnati to their first playoff win since 1991, an AFC Championship, and now, a Super Bowl appearance. Being the underdog means nothing to the scrappy Burrow, in fact, I think he relishes the role. In any event, I think we’ll be in for a great matchup on Sunday.

Although Burrow has exploded onto the scene, Stafford is a wily veteran who has been through many ups and downs in his career. He certainly knows how to fight through adversity, as he seemingly did so constantly throughout his tenure in Detroit. Stafford has put together a very respectable first season with the Rams, logging 4,886 yards passing, and 41 touchdowns compared to 17 INT. He benefitted from a historic season by WR Cooper Kupp, who snagged 145 balls for 1,947 yards and 16 TDs. Behind Kupp was the breakout speedster, Van Jefferson, who caught 50 balls for 802 yards and 6 scores. In the middle of the season, the Rams signed splashy WR Odell Beckham, Jr., and quickly then lost Robert Woods for the season to a torn ACL. Beckham’s numbers don’t pop off the chart, but he’s commanded a ton of secondary attention since he’s arrived and opened things up for Stafford down the field. As we all know, Beckham is always one touch from breaking the game open.

In the backfield, there was a bit of a revolving door for Los Angeles this season, with Darrell Henderson Jr. and Sony Michel taking turns as the lead back. However, Cam Akers made a miraculous recovery from his Achilles injury in the preseason and will be the #1 option for the Rams on Sunday. Overall, the Rams are completely flush with options and can attack opposing defenses in any number of ways. Defensively, Los Angeles has the ability to shut any team down, given the number of stars they have in their arsenal. Aaron Donald and Jalen Ramsey just might be the most iconic defensive duo in the NFL, and while they ranked in the middle of the pack for scoring defense, they made up for it with 50 sacks and 19 INT. Both of those marks are 3rd best in the NFL.

It’s also worth noting that their midseason acquisition of Von Miller brought them a ton of veteran experience, as Miller has a ring and a Super Bowl MVP trophy sitting on his mantle. If the Rams have one exploitable weakness, it’s their secondary (aside from Ramsey, of course.) During the regular season, they ranked 22nd in the NFL in passing yards allowed, and we know Burrow is going to be throwing the ball at will on Sunday. Make no mistake, this is an impressive defensive unit, and with the likes of Sean McVay and Raheem Morris watching over them, they should keep LA in the game on Sunday. 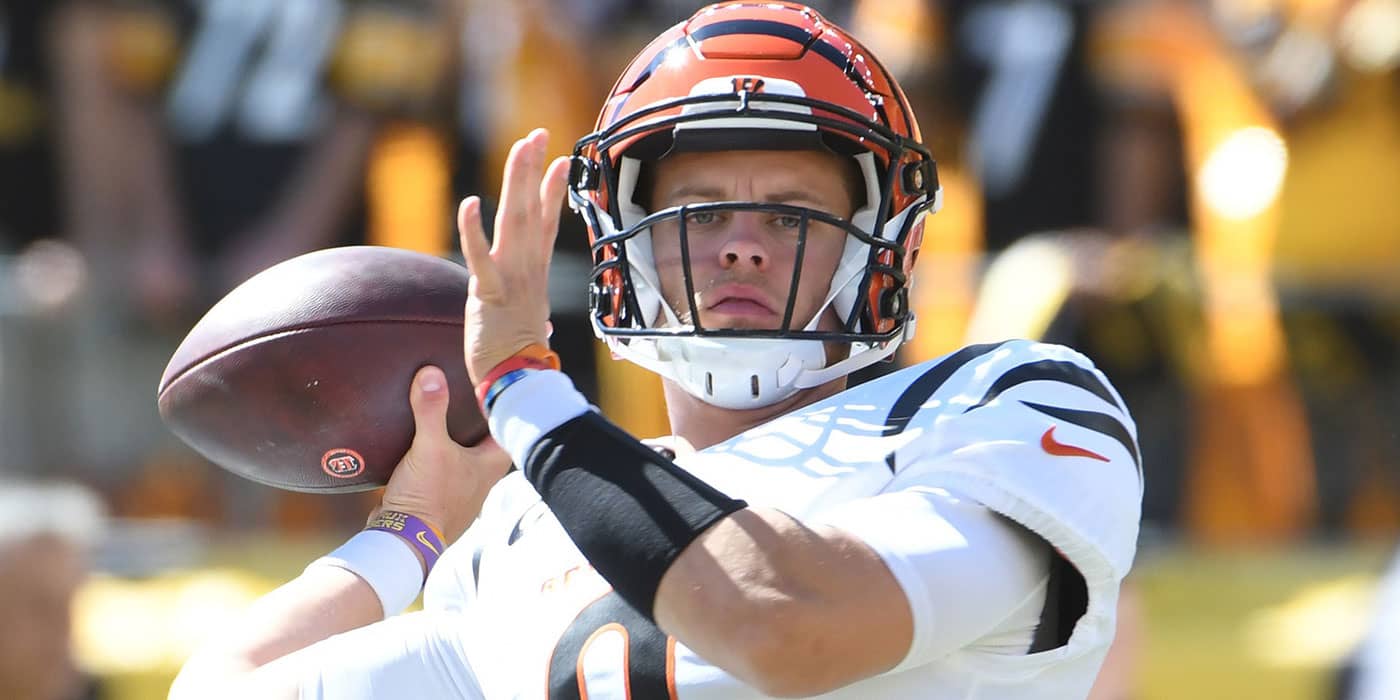 Cincinnati is America’s sweetheart right now and is settling into the Cinderella role we all know and love. Joe Burrow has incredible poise and has shown that quality repeatedly through the regular season, and playoffs. His “big game” success dates back to his days at LSU when he won a National Title and captured America’s heart in the process. This season, Burrow turned in some admirable results, throwing for 4,611 yards, 34 TD, and 14 INT. He beat the Chiefs twice in the process, showing he doesn’t crumble under pressure, and commands his team like a true veteran would– not bad for a second-year player. A huge factor in Burrow’s success is the multitude of offensive weapons they have at their disposal.

Likely the Rookie of the Year, Ja’Marr Chase was electric this season. He caught 81 balls for 1,455 yards and 13 TD. Chase’s after-the-catch ability ranks right up there with the best in the NFL, and he can truly shift the tide of the game any time he touches the ball. Chase will undoubtedly see a bunch of Jalen Ramsey on Sunday, but Zac Taylor always finds creative ways to get Chase the ball in space. What makes this Bengals offense truly dynamic, though, is their depth at the pass-catching positions. Tee Higgins would be a bonafide WR1 on most teams, yet he forms a perfect duo with Chase in Cincinnati. Higgins logged quite the season himself, pulling in 74 balls for 1,091 yards and 6 scores. With Chase commanding extra attention in the LA secondary, we should see plenty of mismatches where the Bengals can get Higgins the ball. He’s a fantastic Red Zone threat, and when paired with CJ Uzomah and the ever-reliable Tyler Boyd, the Bengals have a quartet of pass catchers that can burn you at any moment.

Also waiting in the wings is RB Joe Mixon, who had a tremendous season, logging 1,519 all-purpose yards and 16 TDs. Mixon’s ability to catch the ball makes him a player that must be constantly monitored. However, I have concerns about his ability to run the ball on Sunday. The Rams ranked 6th in the NFL in rushing yards allowed, and the Bengals’ weakness is undoubtedly their offensive line. While Burrow & Co. survived their first few playoff games despite suspect OL play, they haven’t quite met the likes of Aaron Donald yet. To give credit where it’s due, they did a much better job against Kansas City… but it’s a factor to keep an eye on, regardless. The Bengals’ defensive unit has also been sneakily effective this year. They’re very similar to Los Angeles, actually, in that their strength lies in stopping the run (6th in NFL), and they struggle a bit against the pass (26th in NFL.) However, they’ve come to play this postseason, forcing multiple crucial turnovers against both the Titans and Chiefs. Additionally, part of their success against Kansas City was their ability to get to Patrick Mahomes. DE Sam Hubbard logged 2 sacks in the AFC Championship, while DE Trey Hendrickson added 1.5 sacks of his own. If they can replicate this turnover & sack success on Sunday, it’ll bode well for Cincinnati.

I think we’re in store for a classic game on Sunday Night. While the line favors the Rams by more than a Field Goal, I truly believe that this game could go either way. With both teams excelling against the run and showing some vulnerability against the pass, I think there’s a chance we see a high-scoring affair in Inglewood. Los Angeles is a complete team; they’re strong on both sides of the ball and are littered with stars. Not to mention, many feel that Matthew Stafford was the last piece of the puzzle– the bump they needed to make it to the promised land. Stafford certainly has the skill and the intangibles to take this team all the way with a win on Sunday. But while offense puts fans in the seats, the age-old adage is that “defense wins championships.” A huge X-Factor on the other side of the ball is DL Aaron Donald, who might be the best player in football. His presence gives the Rams’ DL a huge boost over the Bengals’ questionable offensive line. On paper, the advantage in the trenches sure does give the Rams the edge logically. I think Donald & Co. will be successful in limiting Joe Mixon, forcing Burrow to win the game with his arm. While Ramsey should be able to limit Chase, I do think Taylor will find ways to get the electric WR the ball in space. Even if he’s not able to, Chase will demand safety attention over the top, and I think it’ll open up avenues for Tee Higgins to continue his production this postseason.

What I just can’t get past is the “it” factor of Joe Burrow. He lives for the big moments, he relishes in pressure-filled situations, and he always keeps his cool. And when the lights are on, the man just wins. I’m certain that Burrow will keep things close when the chips are on the table, and I have the utmost confidence in him to defy the odds, show poise down the stretch, make the throws, and do what he does best– lead his team. He’s never lost a college or pro playoff game as a starting QB. He didn’t lose one at LSU. He hasn’t lost one in the NFL. He won’t lose one on Sunday.

Thank you for reading this season. It’s been a pleasure! Enjoy the game.