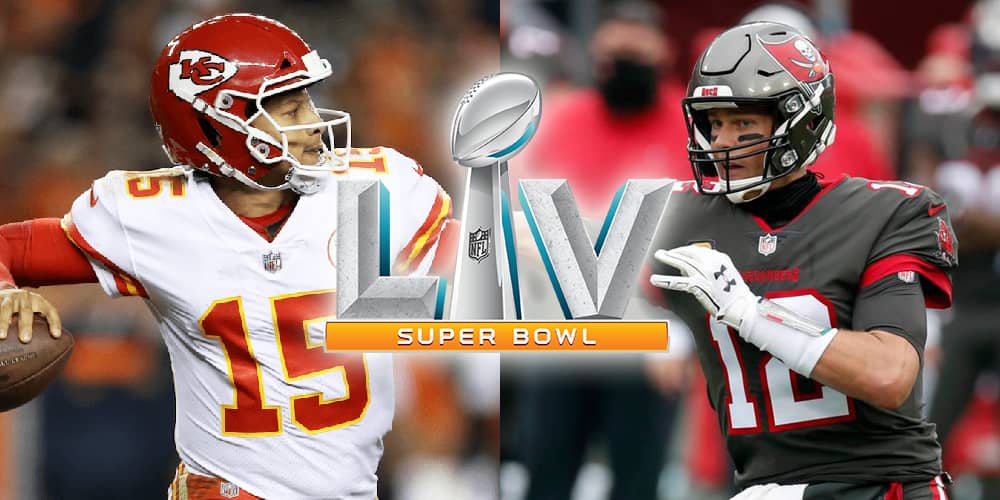 Heading back to the Super Bowl for the tenth time, Tom Brady just continues to add to a resume that already sees him widely considered the greatest quarterback of all time. And we couldn’t ask for a better matchup, as Patrick Mahomes has been making opposing defenses look silly since taking the reigns in Kansas City where he’s already looking for back-to-back rings at just 25 years old. What more could we ask for?

Although the Super Bowl is still a week away, it’s never too early to start analyzing potential prop bets and today we’re taking a look at the two quarterbacks.

During the regular season, the Chiefs surrendered over 4.5 yards per carry to opposing running backs, allowing 1618 rushing yards on 359 totes. And things didn’t get much better in the playoffs, as the Browns duo of Nick Chubb and Kareem Hunt rushed for 101 yards on 19 carries in the Divisional round. The Buffalo backs didn’t fare quite as well last week, but we also shouldn’t overlook quarterback Josh Allen’s 88 yards on seven carries since he effectively functioned as the first option in the Buffalo running game once Zack Moss went down. That’s all a long way of saying the Chiefs have been giving it up on the ground all season.

Enter the combo of Leonard Fournette and Ronald Jones, who’ve amassed 289 rushing yards between them in the postseason, and that’s despite Jones missing nearly all of the Wild Card game against Washington, which he left before recording a carry. Toss in third-string back, Ke’Shawn Vaughn’s 21 yards in that game, and Bucs running backs are well over 300 yards through three postseason contests.

One has to imagine the strategy for Tampa Bay hinges on keeping Patrick Mahomes and Kansas City’s high-powered offense off the field as much as possible, and there’s no better way to do that than by running the football. That likely limits Brady’s passing upside and has me feeling good about the under on his 295.5 passing yards prop. It’s nearly six yards higher than his regular-season average and nearly nine yards less than what he’s averaged through the first three rounds of the playoffs.

A lot of the odds mentioned in this article are from Betway, if you’re thinking about placing any wagers on the big game, I recommend checking out this Betway Review to better understand all the details to signing up to a Betway sportsbook. There are lots of great tips for first-timers.

While the focus ahead of the AFC Championship was squarely on the head injury Mahomes suffered in the Divisional round, reports surfaced that it was actually the turf toe injury he was seen dealing with in the first half that was a larger concern. Despite gaining just five yards on the ground against the Bills in the AFC Championship, Mahomes looked plenty mobile evading the Buffalo pass rush and repeatedly finding open receivers downfield.

Maybe it’s a fool’s paradise and he’s just leading me down the primrose path, but in fifteen regular-season games, Mahomes logged 21 yards or more on the ground nine times. Nine times! With two weeks to rest and recover as well as a Super Bowl title on the line, I expect we’ll see Mahomes use his legs a little more next week. Give me the over.

At the moment, Kansas City’s Vegas implied total is north of four touchdowns at 29.75 points and the Chiefs draw the NFL’s premier run defense in this matchup. On the season, Tampa Bay was the only team to surrender less than one thousand yards to running backs on the ground and tied for the second-fewest rushing scores (8) allowed to the position as well. That trend has continued into the postseason, where the Bucs have allowed just 257 total rushing yards and two scores over twelve quarters of football, with 46 of those yards and a touchdown attributed to Washington quarterback Taylor Heinicke in the Wild Card round.

The way to beat the Bucs is through the air so I like the over here.

Tom Brady led the NFL in deep ball attempts (those traveling 20 yards or more through the air) during the regular season. And despite some lackluster success, through three rounds of the playoffs, he’s not letting up. Brady already has eight pass plays of 25 yards or more in the postseason, including four against what was supposed to be the strength of the Green Bay defense last week. Obviously, these types of pass plays aren’t highly predictable so it’s really about the opportunities, and we get those from Brady.

With four pass plays of 35+ yards so far this postseason, 39.5 yards feels like a fair number and I’m inclined to roll with the over on this one.

As I highlighted above, Tampa Bay’s defensive strength is in neutralizing opposing running games. But one aspect that hasn’t been tested this season is this defense’s viability with respect to mobile quarterbacks. It’s an additional reason to feel good about Mahomes’s rushing prop, but it also has me taking a hard look at him as a touchdown scorer, especially at the current +280.

Somehow Tampa Bay’s schedule allowed them to dodge nearly every quarterback that we think of as a threat on the ground, save for a Week 12 matchup with Mahomes, who shredded them for 462 yards and three scores through the air. And I guess arguably, Daniel Jones in Week 8. They are the only two quarterbacks the Bucs faced this season that finished with 300 or more rushing yards on the year. If we’re looking for a template as to how a quarterback capable of winning with his legs could attack this defense then strangely,  Taylor Heinicke isn’t a bad comp and we watched him almost pull off the upset in the Wild Card round.

As much as the Chiefs defense has struggled to keep opposing rushing attacks in check, they yielded surprisingly few touchdowns on the ground, especially to the running back position. Unlike Tampa Bay, Kansas City played a schedule rife with rushing threats at quarterback, including Deshaun Watson, Lamar Jackson, Taysom Hill, Justin Herbert-twice, Josh Allen, and Tua Tagovailoa. All but Jackson and Allen found the end zone, as opposing quarterbacks equaled the running backs touchdown output on the ground with seven. The good news, Tom Brady doesn’t profile like any of the guys above and his rushing range is roughly one yard

Conversely, Kansas City yielded 29 passing scores on the season, which is 15 more than they allowed on the ground. And as much as I like Tampa Bay to have success running the football, I also think when push comes to shove in the red zone, Bruce Arians will have no qualms about putting the ball in the hands of an all-time great over a relatively average running back platoon so I’m a fan of the over.