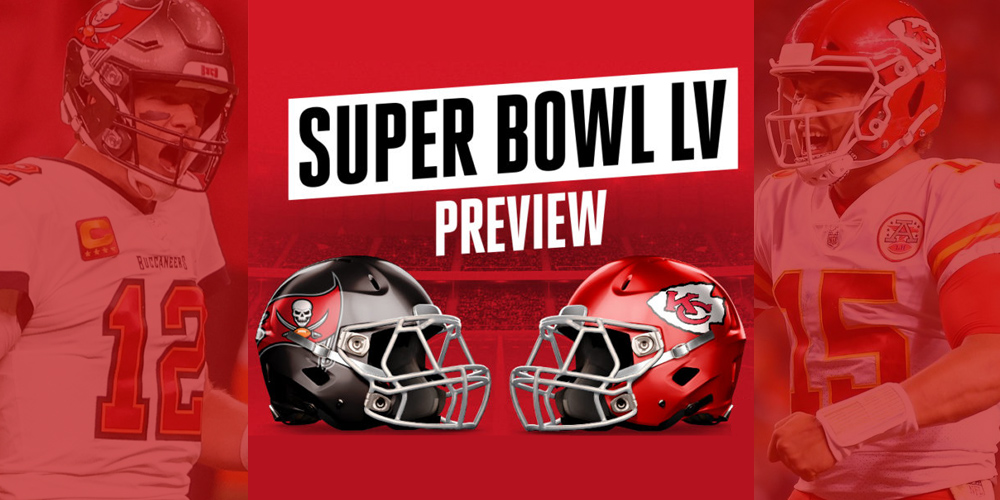 If the NFL was writing a script for the 2020-2021 season, they couldn’t have picked a more dramatic ending. It’s almost like a Hollywood blockbuster… the young phenom against the greatest quarterback of all-time. In the Conference Championship round, Patrick Mahomes and Kansas City completely overwhelmed Josh Allen and the scrappy Buffalo Bills, thwarting their Cinderella Story from coming to fruition. On the other side of the coin, Tom Brady looked like a man on a mission, making clutch throws and leading Tampa Bay to the Super Bowl in his very first season as a Buccaneer.

Despite Brady’s early success in his new city, Mahomes is the man to beat as the defending Super Bowl MVP. Mahomes benefits from having two of the game’s best pass-catchers to target, with the speedy Tyreek Hill, and the game’s best tight end in Travis Kelce. The dynamic duo combined for 230 receptions, 3,201 yards, and 29 touchdowns to this point– just unbelievable production. The reigning Super Bowl MVP was also quite productive himself this year, compiling 5,320 yards, 42 TD, and only 6 INT, while adding 3 rushing TD in 17 games. In the backfield, Clyde Edwards-Helaire was the team’s most-used back, taking 187 totes for 810 yards and 5 scores. While Edwards-Helaire missed some time with injury, he was spelled by Darrel Williams and Le’Veon Bell. Aside from the Kelce/Hill duo, Kansas City had speedster Mecole Hardman (47/622/5) and Demarcus Robinson (46/480/3) turn in productive seasons as well. Overall, the Chiefs are completely flush with options and can attack opposing defenses in any number of ways. Defensively, Kansas City has shutdown potential and has some major playmakers. Tyrann Mathieu and Daniel Sorensen have proven that they are one of the best Safety combinations in the game, and have been especially stellar this postseason. On the line, they have Chris Jones, who is one of the league’s best at his position, along with DE Frank Clark who can make a play on any given snap. If there’s an Achilles’ Heel for this Kansas City team, it very well might be their offensive line. With the loss of LT Eric Fisher last week, the team is reeling a bit and will be starting mostly backups compared to who they had lined up at the beginning of the season.

Interestingly enough, Tampa Bay’s strength on defense is their line. With names like Ndamukong Suh, Vita Vea, and William Gholston upfront, the Kansas City line will certainly have their hands full. The Bucs’ defense is flush with studs, including pass-rushers Shaquil Barrett and Jason Pierre-Paul, who were dominant in the Bucs’ win over the Green Bay Packers in the NFC Championship. Veteran Lavonte David leads the Linebacker corps, while Carlton Davis III and Sean Murphy-Bunting have also performed quite down the stretch. With that said, all eyes will be on QB Tom Brady, as he enters his 10th Super Bowl. Brady amassed 4,633 passing yards this season, along with 40 TD, and spread the ball out quite a bit along the way. Brady had 8 players that caught at least 25 balls this year and was rarely without an elite option to throw the ball to. Mike Evans led the way for the Tampa Bay receivers, logging 1,006 yards and 13 touchdowns on the year. Chris Godwin was also quite productive, given the “new options” Brady brought to town with him, adding 840 yards and 7 TD. These newcomers I referenced were former All-Pro TE Rob Gronkowski (45/623/7) and WR Antonio Brown (45/483/4 in only 8 games.) Not to mention, WR Scotty Miller stepped in admirably and had some clutch catches, including the long bomb touchdown to end the 1st half in Green Bay last week. On the ground, Bruce Arians has deployed his committee throughout the whole season, giving significant touches to both Ronald Jones II and Leonard Fournette. However, in recent weeks, Fournette has taken the lead role and contributed to both wins.

I do believe that we’ll watch a great game on Sunday night and that both Mahomes and Brady will shine at times. To me, the absence of Eric Fisher is a huge loss for the Chiefs and one that should concern them, given the performance we saw out of Pierre-Paul and Barrett last week. If the Buccaneers can rush the passer effectively and throw Mahomes off of his rhythm, it gives Tampa Bay the best chance to keep it close. We’ve all seen that teams can’t cover BOTH Tyreek Hill and Travis Kelce for an entire game, but things get a lot more difficult for Mahomes if he’s constantly being chased in the process. Now, with that said, we need to remember that Mahomes is a dual-threat and can scramble when needed… but that leads to another few questions. Will Mahomes be a bit more gun-shy when it comes to scrambling after the concussion he sustained a few short weeks ago? Or did Andy Reid tell Mahomes that he needs to get out of bounds or slide instead of trying to add extra yards? I don’t want to beat this into the ground, but without Fisher, the KC line does take a big hit, and the Tampa Bay defensive front is arguably the game’s best. Given that, we see the blueprint for the TB defense to keep it close– pressure Mahomes enough that he can’t hit Kelce and Hill at will. Now the question is: can they score enough points? Well, aside from Kansas City, Tampa Bay has one of the best sets of receiving options in the NFL. They’d benefit from the return of Antonio Brown if his knee injury allows him to suit up– so that’s something to watch for. But remember, they still have Evans, Godwin, and Gronkowski even if Brown can’t go. And, it goes without saying that Brady and Gronk have some big-game experience. When the chips are on the table, I think we’ll have a one-score game going into the 4th quarter. The Tampa Bay defense will shine with a few clutch sacks of Mahomes, and Tom Brady will lead a late-game drive to put the Buccaneers up for good. Like I said last week, I don’t think Tom Brady’s legacy is complete and that there’s still some of his story that is yet to be written. On Sunday, he’ll add his seventh Super Bowl ring to his trophy case, and we’ll all be a witness to something truly amazing.

Thank you for reading this season. It’s been a pleasure! Enjoy the game.