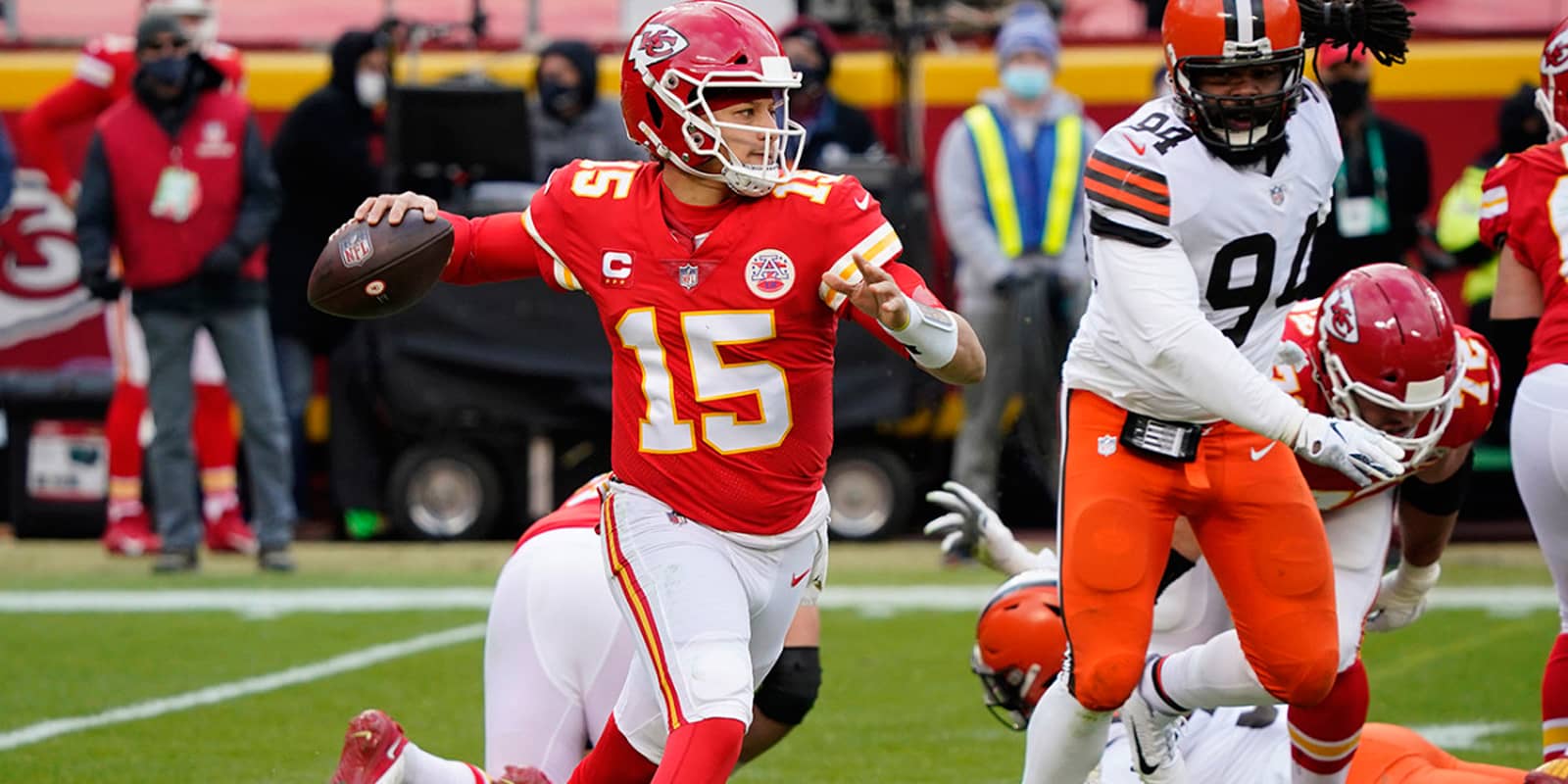 With Super Bowl 55 in the rearview mirror, it’s not too early to consider next season’s champion, at least from a better’s perspective. Betting odds for Super Bowl 56, which is scheduled to take place at SoFi Stadium on February 6th, 2022, have been released across various platforms including DraftKings, BetMGM, among others. While it may be over 370 days away, let’s grab a sportsbook bonus code and take a look at some possible bargains on Super Bowl 56.

With Super Bowl 55 in the rearview mirror, it’s not too early to consider next season’s champion, at least from a better’s perspective. Betting odds for Super Bowl 56, which is scheduled to take place at SoFi Stadium on February 6th, 2022, have been released across various platforms including DraftKings, BetMGM, among others. While it may be over 370 days away, let’s grab a sportsbook bonus code and take a look at some possible bargains on Super Bowl 56.

After being on the precipice of a championship, having a double-digit lead with just over six minutes left in Super Bowl 54, San Francisco had a flat and injury-riddled showing in 2020. They had multiple starters miss significant time including Nick Bosa, George Kittle, Jimmy Garoppolo to name a few. This caused the 49ers to finish 6-10 and has them in a bit of a crossroads. When healthy, they have the talent on their roster and the coaching staff to be among the NFC’s elite teams and could very easily be back in playoff contention again in 2022. However, they also have some valuable assets that could go towards retooling their roster, or even committing to a full rebuild if they are so inclined. One of those pieces that will surely be shopped in Garoppolo, who still has over $53 million owed to him through 2023.

While this all may sound pessimistic, there is a lot of upside to betting on the 49ers to be the 2022 champion. All of the star players who missed time this season should come back next year, looking for a chance to cement their role on this roster after seeing how multiple members of the depth chart fared in 2020. Guys like Raheem Mostert and Fred Warner will be playing for contracts and have every reason to leave it all out on the field next year.

These renewed forces along with the moves they will make this offseason, which could be as glamourous as trading for Deshaun Watson or more moderate in nature, puts the 49ers as a team many should bet on to win Super Bowl 56 next year.

After putting an end to their long streak of missed postseasons and even winning a playoff game, the Cleveland Browns truly have nowhere to go but up next season.

With these metaphorical monkies off their back, the Browns will go into the 2021 offseason with a sense of accomplishment and relief as they build their young core into a contender. While they may not have the high-end draft capital that they have been known for this century, the Browns will have some extra mid-round selections if they feel inclined to make a big splash move on draft night or can use those picks on depth pieces to fill out the roster. Cleveland will also have some cap space this offseason with many of their core pieces signed already so they will likely be a player in some of the high-end free agents.

The Browns will also get a huge upgrade to their offense next season when Odell Beckham returns from the knee injury he suffered in Week 7 of this year. He seems to have learned a lot from his time away from the team and looks like a lock to be a constant contributor next season.

Odell Beckham Jr. was proud of the #Browns and missed being part of it pic.twitter.com/1v4XT58V3I

With Cleveland getting back a Pro Bowl level weapon and having the upside to add more to what is already a playoff contender, 22/1 odds are quite the deal right now.

If you are looking for a dark-horse, dart-throwing bet to potentially win big on next year, Washington is a solid choice.

Though the Football Team backed into the playoffs at 7-9, they looked good in stretches this season. Especially towards the end of the year, where they won five of their last seven regular-season games on the back of their strong defense that held opponents to 20 points or less during that same span. Washington will look to build on its 2020 success and will have the draft capital and cap space to do so.

Washington will have the eighth-most cap space going into the 2021 offseason, which they can use to go big-game hunting in position groups they need (such as signing Chris Godwin and Richard Sherman) or add depth to their overall roster. For the draft, they currently have the 19th pick in the first round and an extra pick in the third round (74th overall) from San Francisco. They can use these picks as sweet trade assets to move up the board and grab a franchise quarterback, or even if they stay put, will be in positions to select players who can contribute next season towards another playoff push.

While the realistic nature of the Football Team winning D.C. their fourth championship in four years may be slim at the moment, Washington has a lot of upside going into this offseason and could make the moves to push them from fringe playoff team to legitimate Super Bowl contender as early as next year. Vegas has them valued at around 60/1 currently, which is a sweet price for a team in this position. Whether you are a die-hard fan of their team or a smart better looking for a lottery ticket, betting on Washington for Super Bowl 56 is a tremendous value.

Los Angeles made one of the first big moves in the 2021 offseason when they made a blockbuster man-under-center swap with Detroit, sending Jared Goff and a bevy of draft picks in exchange for Matthew Stafford. While this trade has many excited for the prospect of the Rams’ championship-contending window, from a betting perspective we lost out on good value.

When odds first opened for Super Bowl 56, Los Angeles was among the middle of the pack, slotted alongside fellow playoff teams from this year at +2200. Once the trade was announced, they shot up the board and now sit at +1200, in the same tier as Buffalo and Baltimore. This trade was one that needed to be made, seemingly for every party involved, but it will be interesting to see if it will truly be enough to put this team over the top.

The Rams are a very top-heavy team, they have a handful of the top players at their position (such as Aaron Donald and Jalen Ramsey) but it has come at the cost of their salary cap flexibility and draft capital. For example, due to the Ramsey and Stafford trades, Los Angeles will not have possession of its own first-round pick until 2024. Now, if these moves result in a Super Bowl or two during that timeframe, it will be seen as money well spent. But, it also has the added effect of putting immense pressure on the team to win now, which is a hard pill to swallow if they can not find a way to capitalize in the next few seasons.

Though betting on the Rams can be a solid move, since they will likely be in the playoffs again in 2022 and could very well make their way to Super Bowl 56, the value just isn’t there post-trade to make it something worthwhile with all the other variables involved.

When it became official that Drew Brees would be retiring at the end of the 2020 season, naturally fans and betters alike began to wonder what New Orleans would do after losing the best quarterback their franchise had ever had. Many hoped he would have a positive send-off into the sunset, but unfortunately Tampa Bay had something to say about that. Now the Saints enter the 2021 offseason with multiple questions about where the time with Brees had gone, if their contending window was still open and what the plan would be with their roster.

The last of those questions will probably be one of the most predominant ones of the NFL offseason as New Orleans is in a very peculiar predicament. Currently, the Saints are $94 million over the salary cap and will need to make multiple moves just to be cap compliant, let alone a playoff team next season. Not only are they facing cap trouble, the Saints only have three total picks in the 2021 NFL Draft (28th, 60th, and 124th overall) so building their roster that way will also be a challenge.

If you add the loss of Brees, their cap catastrophe, and their lack of draft picks, it makes for a cocktail that betters should avoid at all costs until some changes are made.

During the beginning of the 2020 season, the Arizona Cardinals looked like they had made some strides in the right direction. Before their bye week, they were 5-2 and poised to make noise in the postseason. But, due to a multitude of factors, Arizona stumbled down the stretch and finished 8-8. This finish was despite a solid season from Kyler Murray, who finished with 819 rushing yards and 11 rushing touchdowns in addition to his 3971 passing yards and 26 passing touchdowns. His future is still very bright but the team around him showed some cracks during last season, particularly on defense. The Cardinals will have lots of holes to fill throughout their defense this offseason but will also be looking to add additional playmakers to their offense, such as at running back or tight end.

The potential for this team is very high, especially when you have a talented duo like Murray and DeAndre Hopkins to lead you through a possible playoff run, but there are still so many questions about various positions on this team that their value as a dark horse bet is just too low for me. Unless some serious moves are made to add defensive talent or a splash signing happens, I would not put my money on the Lombardi Trophy going to the desert in 2022.