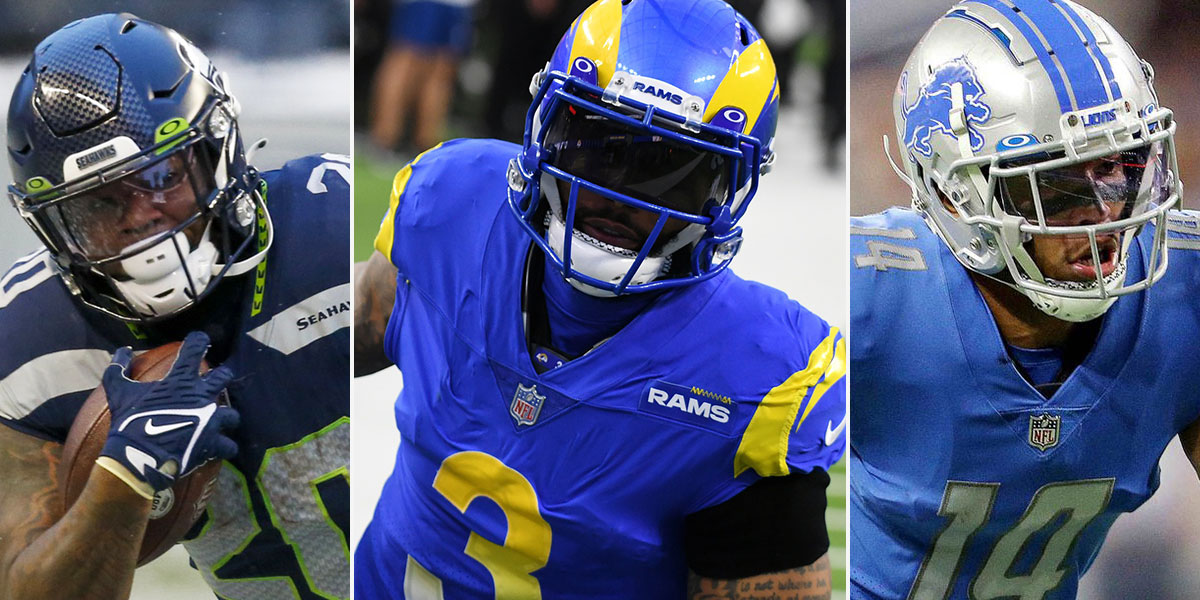 For most, this is the week of league championships where everything is on the line. That means every lineup choice has to be the right one to take home the gold (or maybe just bragging rights). It’s all come down to this. With that, let’s dive in and look at the players to start and sit for this weekend.

Joe Burrow lit the world on fire and finished as the QB1 but Dak Prescott surprisingly was the QB2 and Justin Fields was inactive due to an injury. Devin Singletary had a top-12 week and Devonta Freeman finished just inside the top-30 while Duke Johnson didn’t do very much after a terrific week 15. Darnell Mooney and Russell Gage finished outside the top-40 while Mike Williams did not play due to COVID-19. Zach Ertz finished in the top-eight and Cole Kmet finished in the top-15 but Mike Gesicki barely finished inside the top-36. Now we are on to week 17!

This isn’t necessarily the best matchup on paper for Burrow as the Chiefs are only giving up an average of 231 passing yards per game with four passing touchdowns to three interceptions over their last three games. But it’s hard to bench Burrow after he went scorched earth on the Ravens to the tune of 525 passing yards and four touchdowns in week 16. The Chiefs did give up a 27-point game to Justin Herbert in week 15 (236 passing yards, two passing touchdowns, one interception with 16 yards rushing, and a touchdown), so it’s not as if they are impervious to giving up a big game. The Bengals just seem to be clicking with two straight wins and the AFC North division lead heading into this weekend. Burrow is a low-end QB1 with the upside for much more.

In the wake of Jimmy Garoppolo’s torn UCL in the thumb on his throwing hand, Lance looks to be very much in line to start in week 17 for the 49ers. In his first career start, Lance only threw for 192 scoreless yards and an interception but had 89 rushing yards and came very close to a rushing touchdown against a tough Cardinals’ defense. The Texans aren’t exactly hemorrhaging fantasy points to opposing quarterbacks (18.9 per game over the last three) but overall, their defense is one of the worst in the league on paper. Plus, with the 49ers in a “must-win” game, they’ll be inclined to do everything they can to come away with the victory after the Texans upset the Chargers last weekend. Lance’s rushing upside gives him a top-15 floor with the upside for so much more with George Kittle, Deebo Samuel, and Brandon Aiyuk all healthy.

Maybe he is just checked out of Seattle and looking forward to getting traded this offseason? Wilson just hasn’t looked the same since returning from his hand injury with only one game with 250+ passing yards in his last seven. He has zero passing touchdowns in three of those seven and has no more than two in any game during that span. He also has only rushed for 20+ yards once during that time as well. He now faces a Lions’ squad that has only given up four total touchdowns in the last three games to opposing quarterbacks. This is also the same team that stifled Kyler Murray in week 15 to the tune of 257 passing yards, one touchdown, and interception each with a measly three rushing yards. Rashaad Penny has seemingly taken over as the team’s main source of offense and with the Seahawks out of playoff contention, there seems to be no urgency for Wilson or the Seahawks to go all out. He’s a low-end QB1 option (if that) at best.

With Darrell Henderson on injured reserve and his main competition for touches being a running back coming off a torn Achilles, Michel appears poised to handle the lion’s share of work for the Rams going forward. Michel is averaging over 100 yards rushing per game over his last four and has at least 20 touches in each of those games. He now faces a Ravens’ squad that has given up four total touchdowns over their last three games to opposing running backs. They’ve also given up over 90 yards per scrimmage on average to opposing running backs during that time as well. Michel has top-12 upside in a plus matchup for a Rams’ team fighting for the NFC West.

As mentioned above, Penny has taken over as the engine of the Seahawks’ offense with double-digit carries in four straight games. He also has two games of 135+ rushing yards and 1+ touchdowns over his last three as well. With an uninspiring group of running backs behind him in Alex Collins, DeeJay Dallas, and Travis Homer, Penny has virtually no competition for work when healthy. He now faces a Lions’ team that has given up five total touchdowns to opposing running backs over their last four games. They’ve also given up 50+ scrimmage yards to five different running backs during that time. While his quarterback may struggle in this game, Penny is poised for another big week with top-18 upside.

At times, Gaskin seemed like a workhorse for the Dolphins with league-winning upside. But now, he finds himself back in a three-running back committee between him, Duke Johnson, and Philip Lindsay. That’s not to mention Malcolm Brown’s impending return, who stifled Gaskin’s upside earlier this season. Gaskin has a total of 14 touches over his last two weeks and now faces a particularly stingy Titans’ run defense. The Titans have only given up 326 total scrimmage yards (65.2 per game) and two total touchdowns over their last five to opposing running backs. Coupled with the fact that Gaskin’s role seems minimal at best, he can’t be viewed any higher than a low-end RB3/FLEX in championship week.

While Beckham’s touchdown output is seemingly pointing towards negative regression at some point (four in the last five games), he is still seeing plenty of work. He is averaging 6.5 targets per game over these last five and has 75+ yards in two of those five. He is emerging as the number two option in the Rams’ passing offense behind MVP candidate Cooper Kupp. The Rams now face a Ravens’ squad that has given up six touchdowns to opposing wide receivers over their last three games. They also just gave up a combined 22 receptions, 404 yards and three touchdowns to the Bengals’ trio of Tee Higgins, Ja’Marr Chase, and Tyler Boyd this past weekend. The Rams’ passing offense needs a “get-right” game and this matchup seems like just what the doctor ordered. Beckham is a low-end WR2 option.

Is St. Brown one of the best wide receivers in football? Ok, maybe not just yet. But he is producing like one over his last four games with 35 receptions, 340 yards, and three touchdowns on 46 targets. In fantasy football, he is the WR2 overall over that time in half-PPR leagues. And even with Tim Boyle at quarterback, St. Brown still scored another touchdown and put up his season-high in receiving yards (91) this past weekend. With Jared Goff back, St. Brown’s ceiling is even higher when you also mention that he faces a rather weak Seahawks’ defense in week 17. The Seahawks have given up 100+ yard performances to two different wide receivers over their last three games. In fact, they’ve given up 50+ yards to five different wide receivers over their last four games. St. Brown isn’t necessarily an every-week WR1 but he has top-15 upside this weekend as he looks to continue his hot stretch of play.

Moore’s bad luck just continues every year as the uber-talented wide receiver is seemingly always saddled with poor quarterback play. Whether it’s Sam Darnold, Cam Newton, or P.J. Walker, the Panthers are just not getting consistent production at the position. Because of that, Moore’s stats suffer. He is averaging below 10 points-per-game in half-PPR settings over his last three games and has only one touchdown over his last eleven (yes, eleven!) games. He has seen 10+ targets in four straight games but now faces a Saints’ defense that has only given up 50+ yards to two different wide receivers over their last three games. They’ve also only given up two touchdowns over their last four. Moore’s floor is stable but he has a very weak ceiling as a back-end WR2 option at best.

While Everett hasn’t lit up the scoreboard this season, he has been pretty stable since Wilson’s return under center. He’s averaging almost six targets a game over his last seven and three games with 60+ yards during that time. He also has a touchdown and/or 60+ yards in four of his last five games as well. Everett and the Seahawks now face the Lions, who have given up 23 receptions (7.67 per game), 289 yards (96.33 per game), and two touchdowns over the last three games to opposing tight ends. They just gave up 101 yards to Kyle Pitts and a touchdown to Hayden Hurst in week 16 as well. Everett is seemingly a security blanket for Wilson and has a chance to put another solid game in a plus matchup. He has a low-end TE1 appeal this weekend.

Over the last two games, Moreau has topped 65+ yards both times with 11 receptions on 13 targets in Darren Waller’s absence. Since releasing Henry Ruggs, the Raiders have struggled to find a consistent pass-catching option besides Hunter Renfrow. Moreau has stepped up as one option with Waller still coming back from his back and knee injuries. For as long as Waller continues to sit out, Moreau will continue to be a low-end TE1 option. The Colts have given up 54+ yards to an opposing tight end in two straight games while giving up two touchdowns during that time. In a must-win game for both teams, expect to see them pull out of the stops for the full 60 minutes. That should benefit Moreau if Waller continues to sit.

Despite Pitts having three straight games of 61+ receiving yards, he continues to have a low ceiling because of his lack of touchdowns (only one all season). He now also has an extremely tough test with the Bills on tap. The Bills have only given up more than 30 yards to one tight end over their last seven games and have allowed only one touchdown during that time. It’s going to be hard to sit Pitts especially with his steady production at a position with very little of that but expectations have to be tempered as the Bills have given up the third-fewest fantasy points per game over their last three.