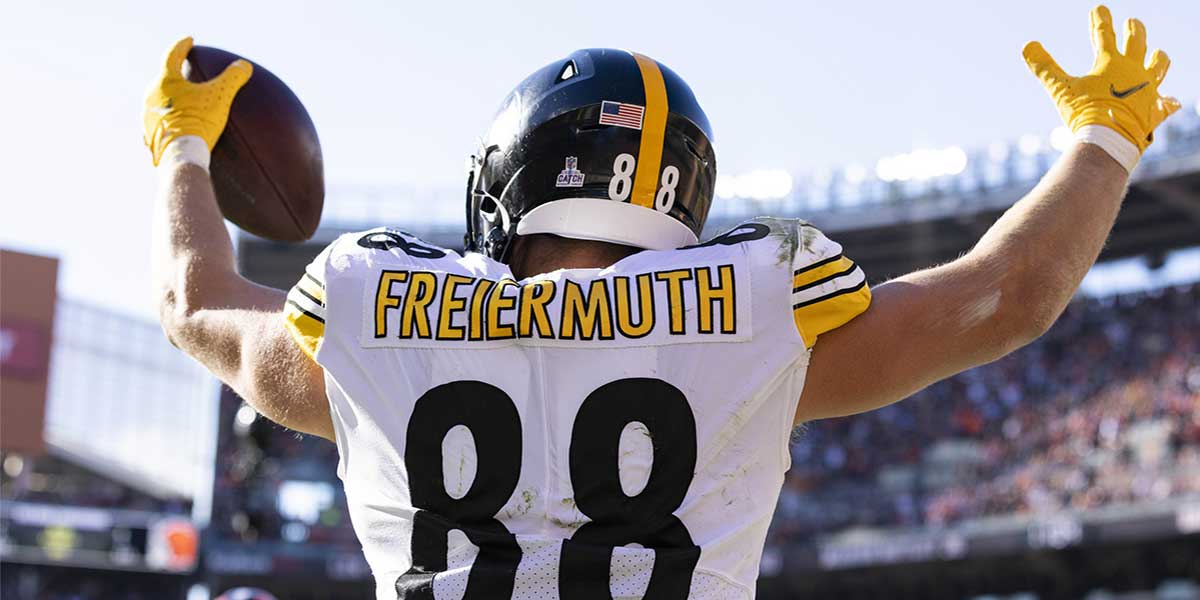 We are past the midway point of the season as we now approach week 11. That means each lineup choice has that much more behind it as we inch closer to the playoffs. With that, let’s dive in and look at the players to start and sit for this weekend.

In Cam’s first game back as a Panther, he didn’t see a lot of playing time but made the most of it. He completed three of his four passes for eight yards and a touchdown while rushing for 14 yards and another touchdown on three carries. When he was re-signed, it was clear that he would operate as the starter when up to speed. This upcoming game should be the start of it and he now faces a Washington team giving up the most fantasy points per game to opposing quarterbacks this season. In six of their last seven games, Washington has given up at least two passing touchdowns. They’ve also given up 25+ rushing yards to three different quarterbacks and 250+ passing yards in five of their last seven games. Newton’s rushing ability gives him a nice floor but could have a very high ceiling this week especially with a healthy Christian McCaffrey to pass to plenty as well.

Despite the Giants winning in their last game against the Las Vegas Raiders, Jones had one of his worst games of the season with only 110 passing yards and one touchdown with 17 rushing yards. The Giants were able to control the game on the ground in that matchup but should struggle to do that against a strong Buccaneers’ defense. Jones has been much better with turnovers as he’s thrown only one interception in the last three games against four passing touchdowns. He also has 57 rushing yards over his last three contests combined after rushing for 13 yards in weeks five and six combined. The Buccaneers have given up 38+ rushing yards to opposing quarterbacks in three of their last four games. Jones should also have a healthier offense to work with as Sterling Shepard and Saquon Barkley both have a realistic shot to return as well. Jones has top 12-upside in week 11.

Surprisingly, Wentz has only three interceptions on the season with 17 touchdowns. This is after Wentz threw 15 picks in 2020 with the Eagles. He also had six straight games of two or more passing touchdowns before this past weekend where he wasn’t needed to do much in an easy game against the Jacksonville Jaguars. He now faces a Bills’ defense that has given up only six passing touchdowns all season and forced 15 interceptions. They’ve given up only one passing touchdown in their last four games combined while picking up six interceptions during that time. The Bills did get torn apart by Derrick Henry earlier this season, so this could be a game where Jonathan Taylor continues to see plenty of work in. Wentz isn’t a viable option on a run-heavy offense going against one of the best defenses in the league.

This pick is more predicated on if Alvin Kamara suits up after missing week 10. Kamara has to be considered no better than 50-50 after not practicing at all last week and promptly being ruled out without a shot of being a game-time decision. If Ingram does get the start again, he has a solid matchup against the Eagles. Ingram had 18 total touches for 107 scrimmage yards and a touchdown in lieu of Kamara and can be expected to see the bulk of running back work for the Saints in Kamara’s absence. The Eagles have given up six rushing touchdowns to opposing running backs in their last five games and have given up 50+ scrimmage yards to five different running backs during that time. Besides those five, Melvin Gordon III and Javonte Williams both had 40+ scrimmage yards in week 10. Ingram is a lock for 15+ touches in any game Kamara doesn’t play and we could see that again in week 11.

The Titans’ running back room is a mess after Derrick Henry went down with his foot injury. Once Adrian Peterson was signed, it was widely assumed he would be the top option for them. However, he only has 20 combined touches in his first two games for a measly 46 scoreless yards from scrimmage. Jeremy McNichols only has 15 total touches for 43 scoreless scrimmage yards during that time. However, Foreman has 18 touches for 107 yards during that time as the most productive running back of the three during that time. He is coming off a game with 13 touches and 78 total yards against the Saints. Foreman saw the most touches of all three running backs in week 10 and now faces a Texans’ defense that has given up 50+ scrimmage yards and six total touchdowns to opposing running backs in the last four games. Foreman could see his workload increase even more in his own little #RevengeGame against the team that drafted him. He’s a solid FLEX option in PPR leagues.

After four straight games of at least one touchdown and/or 92 scrimmage yards from weeks two through five, Moss has hit a wall since. In his last four games, Moss has only one game of double-digit touches, has hit 50+ scrimmage yards once, and has one total touchdown. Devin Singletary hasn’t necessarily separated himself either during that time but this Bills’ running back duo is continuing to be one to avoid when both are healthy. Moss and the Bills’ now face a Colts’ defense that has given up the fourth-fewest fantasy points per game to opposing running backs this season and only five total touchdowns. With Moss’ workload continuing to be disappointing and now in a tough matchup, he shouldn’t be started outside of the deepest of leagues.

After doing very little to start off his NFL career, Moore has stepped up as of late. Since coming off of his bye week (four games), Moore has averaged just under seven targets a game and has four total touchdowns. Moore also has been providing steady receiving production, especially over the last three games. He has 195 receiving yards on 13 receptions during that time after only nine receptions for 79 yards in the five other games combined. He now faces a Dolphins’ defense that has stepped up as of late but has still given up six or more receptions to three wide receivers during the last two games with two going for 50+ receiving yards (one other had 49 yards). Moore has shown he can play well regardless of who is under center between Mike White, Josh Johnson, or Zach Wilson and has a steady floor going forward. He is a top-36 option in week 11.

After an up-and-down rookie campaign, Smith has shown why he was the 10th overall pick over the course of the last two games. While the volume has always been there (6+ targets in six of his first eight games), he hasn’t been able to do much with it. He had only one touchdown and four 60+ yard performances in those eight games. Since then, he 182 yards and three touchdowns in his last two games combined against tough competition (Chargers and Broncos). He now gets a Saints’ defense that has played solid overall but has shown weaknesses against the wide receiver position. They’ve given up the fourth-most fantasy points per game this season to the position. While Smith is expected to see plenty of Marshon Lattimore, he has more going for him than A.J. Brown (four catches for 16 yards in week 10). The Eagles are a more balanced team as they run the ball plenty and Smith, Quez Watkins and Jalen Reagor are all near every-down players. Brown was by himself after Henry’s injury and then Julio Jones went down with his own. Smith is a special talent and should have the chance to buck the trend top wide receivers have been dealing with against them.

While touchdown regression may have not hit Thielen this season (seven in nine games), he has been pretty inconsistent outside of his ability to get into the end zone. He has only four games of 50+ receiving yards through nine games despite six games of five or more receptions. He has seven targets in each of his last two games but only seven receptions for 71 yards and a touchdown to show for it. Justin Jefferson is continuing to be the alpha in this passing offense and Dalvin Cook is seeing 20+ touches a game as well. The Vikings are now going up against the Packers, who haven’t given up a touchdown to an opposing wide receiver in the past three games. They also haven’t given up more than 37 receiving yards to a wide receiver in the last two games. They’ve stepped up as of late and with the Vikings publicly stating how Jefferson needs the ball more, Thielen may be left out in the cold in a tough matchup.

We can chalk up Freiermuth’s disappointing week 10 to not having Ben Roethlisberger under center after testing positive for COVID-19 on Saturday night. Mason Rudolph isn’t going to scare any NFL team, as evidenced by the Steelers somehow ending in a TIE with the only team in the league without a win this season, the Detroit Lions. Big Ben should be back for week 11 and with Chase Claypool dealing with a toe injury, Freiermuth should only see more targets his way even with Eric Ebron healthy again. Freiermuth still has 29 targets over his last four games (7.25 per game), including a season-high nine targets in week 10. The Chargers have given up five touchdowns to opposing tight ends in their last six games, with two of them coming from Tyler Conklin this past weekend. Freiermuth has top-12 upside every week but he is the perfect fill-in option for those without Tyler Higbee or Noah Fant this weekend.

While Knox only had one target for 17 yards in week 10, it was his first week back from a hand injury that required surgery. On top of that, the Bills quickly ran away with their game by a score of 45-17, so they were coasting for more of the game. Prior to his injury, Knox was Josh Allen’s favorite red-zone target with five touchdowns from weeks two through five (he injured his hand in week six). Knox will soon be back into his normal place in this high-powered Bills’ passing offense and it could be as early as this weekend. The Colts have given up 68 yards or a touchdown to a tight end in three straight games. Plus, with this shaping up to be a more competitive game than the Jets in week 10, the Bills may need to actually try throughout the entire game. That’s good news for Knox.

After three games of seven or more targets through his first six games, Cook hasn’t seen more than five targets in any of his last three games. He only has 82 scoreless yards on seven receptions in his last three games combined as the entire Chargers’ passing offense has struggled. Cook has settled in as the number four passing option behind Keenan Allen, Mike Williams, and Austin Ekeler. And even in some cases, he isn’t the top tight end in every passing situation for the Chargers with Stephen Anderson and Donald Parham stepping up at times. There is just no reason for Cook to be viewed as a top-12 option unless something changes. Cook also faces a Steelers’ defense that has given up only two touchdowns to tight ends this season and just prevented T.J. Hockenson from even catching a pass in week 10.