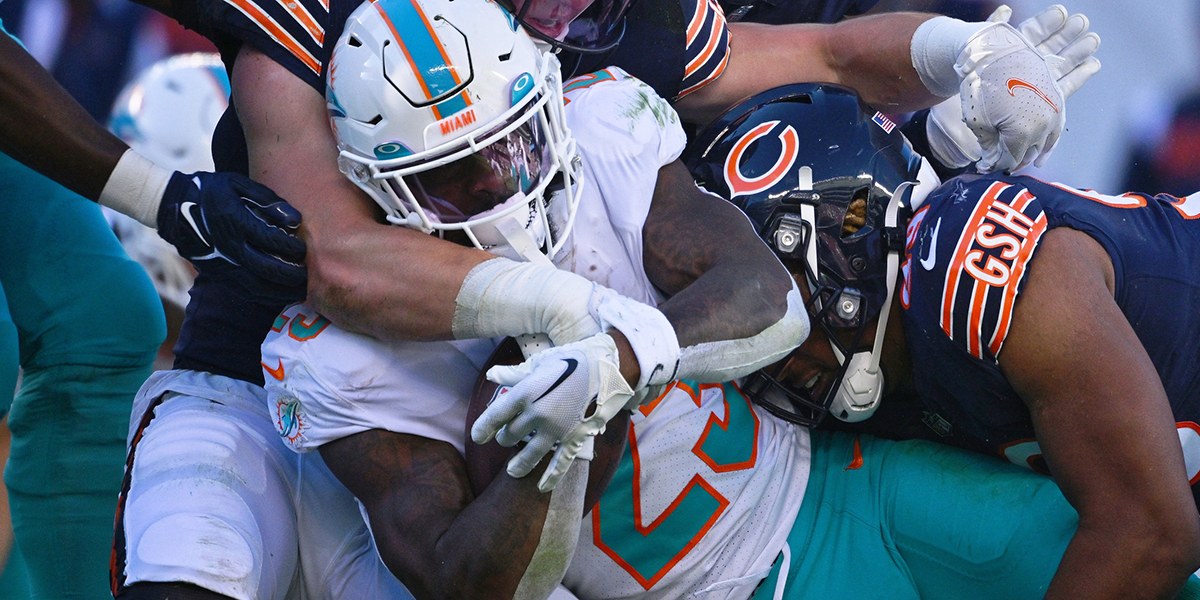 We are two weeks into the second half of the football season and fantasy football is as unpredictable as ever. First of all, I would like to congratulate the fantasy teams who won this week and give positive vibes to the teams that did not. As we continue the road to the playoffs, I would like to talk about the eight players I have chosen this week as potential start/sits in these crucial times. Here are my recommendations for start/sit week 10.

The Bears finally learned how to use their young quarterback by letting him use his feet to his advantage. I was starting to wonder when the Bears would let him loose and take control of the offensive game plan. In week 9 against the Dolphins defense, Fields completed 17/28 passes for 123 yards, throwing 3 touchdowns, and rushed for 178 yards on 15 carries, scoring 1 rushing touchdown resulting in Fields putting up 42.72 total fantasy points earning himself the highest-scoring fantasy quarterback for the week. On the other hand, the Lions defense performed fairly well last week holding Aaron Rodgers to a total of 13.64 in standard leagues with interceptions deducting 2 points, without the deduction, Rodgers totaled 19.64 which is about average for quarterbacks in fantasy football. To be honest, I am completely shocked that the Lions were able to hold off Aaron Rodgers and the Packers offense. It will be completely different as the Bears take on NFC North rivals the Detroit Lions in week 10 where they both are coming off of impressive victories. Fields looks to continue his dominance by playing well again against the Lions defense who on average allows 24.6 fantasy points per game to opposing quarterbacks becoming a solid QB1 in week 10.

It has only been a few weeks since Wilson Jr. joined the Dolphins, and already he has earned himself a big role in the Miami offense. Wilson Jr. rushed for 51 yards on 9 carries, and caught 3 passes for 21 yards and scored a receiving touchdown in Miami’s week 9 win over Chicago. Miami is hosting Cleveland this week where the visiting Browns are fresh off a bye week and it is expected to be a close game. This is a good matchup for the newly acquired Dolphin who also led the backfield in touches last week with 9 against the Browns defense that on average allows 20.5 fantasy points per game to opposing running backs. The fact that the Browns starting defensive lineup is not fully healthy with key players such as Denzel Ward, Jadeveon Clowney, and Greg Newsome II., among others questionable to play in Sunday’s game in Miami, makes this a much more attractive matchup to start Wilson Jr. My recommendation is to start Wilson Jr., as I expect him to perform as a solid RB2 against Cleveland in week 10.

When the cards were stacked against them and all hope was lost, Tom Brady and company showed up and won their game in a must-win matchup against Los Angeles in week 9. This was Jones’ first time back in action since October 27 against Baltimore as he sat out last week due to a lingering knee injury. In the win against the Rams, Jones recorded 2 receptions for 28 yards. My honest opinion is that the Bucs are trying to figure out what the strengths are in their offense and that they are working Jones back from injury not wanting him to re-injure himself. I expect the Buccaneers to start drawing up plays to get the veteran wide-out touches redeeming himself after a lackluster first half of the season. Seattle has been impressive over the past few weeks, but don’t forget that they allowed Detroit to put up 42 points against them this season. The Buccaneers are looking to continue their momentum and find their identity on offense getting everyone involved where I see Jones earning his opportunity. This week against the Seahawks in another NFC division matchup, Jones will become a solid WR3 and flex play in week 10.

In a lackluster performance against New England where Alie-Cox recorded 2 receptions for 13 yards, I see the light at the end of the tunnel against Las Vegas this week. The Raiders lost in a close game against Jacksonville 27-20 where they were favored to win. I did not expect the Raiders to lose again, especially after getting embarrassed the week before. The Colts have had some growing pains as well resulting in the quarterback change to rookie Sam Ehlinger mid-season and the hiring of former Colts center Jeff Saturday as the interim head coach on Monday morning. The two receptions this past week were the start of the two players forming a connection where my opinion is that Alie-Cox will start to become more involved in the offense. He is a good player that has an advantage with his big frame, speed, and agility enabling him to make great plays. The rookie will get his tight end involved in the passing game against the Raiders defense who on average allows 10.0 fantasy points to tight ends becoming a solid TE2 in week 10.

I honestly cannot believe that the Bills lost to the Jets in week 9. Allen might as well have taken the week off as he looked to have regressed back to his rookie season where he performed at his worst. Allen played extremely poorly only completing 18/34 passes for 204 yards, throwing 2 interceptions. His only out was that he scored 2 rushing touchdowns which stat wise is better than passing touchdowns, but he cannot do that forever. His accuracy was off, and he looked distraught, as he stated that he did not play well in his postgame interview. On Monday night, news broke that Allen suffered a right elbow injury and was being evaluated for a UCL injury sustained in Sunday’s loss. Let’s not get this mixed up from his poor play as the injury sustained occurred during Buffalo’s last drive on offense where Jets defensive lineman Bryce Huff hit Allen’s arm forcing a fumble and sacking him in the process. With the combination of Allen’s poor play against New York and now his injury, my recommendation is to put him on your fantasy bench in week 10.

Don’t get me wrong, Walker III is running the ball like a madman out there, but the matchup against Tampa Bay is not a favorable one for the rookie sensation. The Buccaneers defense came into the 2022 season with one of the toughest running defenses and it has stayed that way so far this season as they only allow on average 14.5 fantasy points to opposing running backs which is one of the best in the league. Tampa Bay is looking to continue to build on their win against Los Angeles in week 9 and will not let Seattle run all over them. If you’re expecting Walker III to score high double-digit numbers this week, you will be greatly disappointed.

It always seems as McLaurin is a consistent and reliable fantasy option every year for fantasy owners as he posts double-digit numbers almost weekly. Unfortunately in the Commanders week 9 loss to the Vikings, McLaurin only recorded 5 receptions for 56 yards resulting in a dud performance for the veteran receiver. On the other hand, we have not seen a team like the undefeated Eagles in a while. In my opinion, the Eagles defense has been playing very well lately and are a hard team to score against. I do not expect McLaurin to perform well in week 10 as he is facing an Eagles defense that on average allows 17.3 fantasy points per game on average to opposing wide receivers which is one of the best in the league. My recommendation is to sit him this week against Philadelphia.

I still do not agree that the Chargers are playing their young quarterback Justin Herbert, as he looked to be clearly in pain during their celebration after a victory over the Falcons 20-17 in week 9. It seems as if every receiver on the Chargers offense has taken a dive fantasy-wise due to Herbert’s injury as Everett only caught 5 receptions for 36 yards on Sunday. Against the 49ers defense that on average only allows 4.4 fantasy points per game to opposing tight ends, my recommendation is to sit Everett this week against San Francisco.