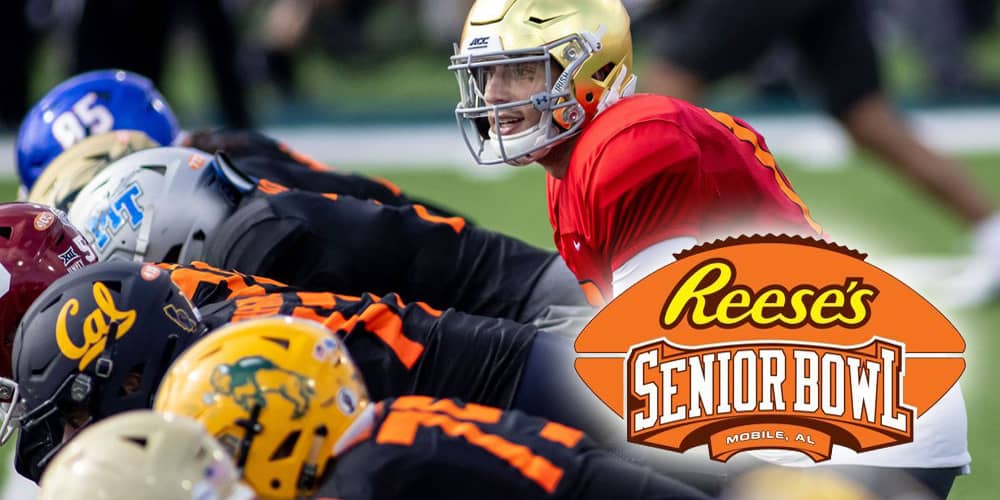 Senior Bowl is the unofficial kick-off to spring scouting (at least it is for me). It is snuggled in right between the Division Championships and the Super Bowl and is the last bit of college football before the NFL draft in April. On top of a week of practice, everyone gets to see these seniors all on the same field and against the same level of competition. A level of competition that some of the smaller school prospects don’t see through the regular season. Although as a Fantasy Football player, you want to see more explosive plays on offense this game was dominated by strong defensive play. However, there were still some offensive winners (and losers) in the game. Let’s break it down by position.

No quarterback won the eye test in the first half. The first half was plagued by sacks, scrambles, tipped passes, and inaccurate throws. Yet, as the game progressed so did the quarterback play.

Kellen Mond – Winner-ish. He looked the part in the second half. He started settling down and on the first drive of the second half, he should have had a touchdown to the Duke tight end, Noah Gray, but the well-thrown ball bounced off the receiver’s hands. Mond went right back to the endzone the next play putting a dime between two defenders and right on Amari Rodgers for the score. He then added a two-point conversion with his legs. He was able to finish off two drives with touchdowns and end up winning the MVP award despite the team loss.

Feleipe Franks – Winner-ish. For as bad as Franks was in the first half he was as good in the fourth quarter. He made a series of accurate throws that ended with a touchdown toss that wasn’t really a touchdown but held up with the lack of instant replay. He finished the day with the most passing yards (122) for the National team and a score.

Ian Book – Winner/Loser. Book won with his legs. Against a strong defensive front, he was able to climb or escape the pocket in response to pressure from all sides. However, his throw accuracy was sporadic. He was only able to complete five of eleven attempts and was held out of the endzone. His interception was a hail mary at the end of the quarter (special rules would have resulted in his team losing possession at the end of the third quarter) and should be counted too strongly against him.

Sam Ehlinger – Loser-ish. Ehlinger finished only 4 of 10 for 42 yards passing. Although he threw for the lone touchdown, the score was made on the strong effort by receiver Demetric Felton. Ehlinger didn’t step back on the field after the first quarter so his night ended with two incompletions and a one-yard completion.

Jamie Newman – Loser. Newman struggled against the pass rush and tossed up some rough looking balls. His best throw was to a wide-open Cornell Powell in the middle of the field. This was until the final minutes of the game when Newman finally brought his time to the endzone. Newman finished with four sacks, an inflated 118 yards (45 yards came off of two plays in the final 1:19 of the game) a score, and a pick.

Amari Rodgers – BIG Winner. Rodgers showed he can work all over the field. He had caught a beauty between two defenders for a touchdown as well as a two-point conversion. Toss in a decent punt return and you have a well-rounded game. Rodgers caught four of six for only 23 yards but he was winning all over the field.

Dez Fitzpatrick – BIG Winner. Dez may have been the only receiver with a reception in every quarter of the game. He led all receivers in the game with six receptions and 90 yards. He made plays all over the field and added a great sideline catch taking the ball from over the top of the defender.

Shi Smith – Winner. Shi found space against the zone then put in work on the run after the catch. He led the American team with 57 yards receiving on his three catches. He did drop one ball that the defender dislodged. Overall he had a nice game.

Demetric Felton – Winner-ish. Felton was looking explosive until he hobbled off the field with what looked like an ankle injury. He had a ten-yard punt return and took a five-yard pass the extra seven yards to the endzone shaking and carrying his defender on the way. He did come back in the third for another 16-yard reception capping off his day at 2 for 28 and a score.

Josh Palmer – Loser-ish. I wanted to see more out of Palmer. But he only had three targets throughout the game. He did bring in two of them for 27 yards. His incompletion was a deep ball that he could have played better by going up to get versus letting it into his chest.

Marquez Stevenson – Loser-ish. According to ESPN, Stevenson was one of the highest-rated WRs in the game but he only had two targets at the end of the first quarter and then wasn’t involved again until a fourth-quarter punt return. Similar to Palmer, I wanted to see more but since there was a lot there he ends up as a loser-ish as his day ended 1 of 2 for 6 yards, rather disappointing.

Frank Darby – Loser. Darby made one catch that at first glance looked more impressive than it really should have been. He stopped to catch a ball that was either intended to be on his back shoulder or caught in the wind. The adjustment was nice but he lets the ball drop into his chest versus extending his arms up to high-point the ball. He was targeted six times in the game – three targets in a row in the third. The first he couldn’t keep his feet in bounds on the sideline; the second he couldn’t separate from CB Melifonwu; the third he couldn’t hold on to what should have been an easy catch on an in route.

Michael Carter – Big Winner. Not only did he have the most electric run, a 20+ yarder in which he ran through three tackles, but also the lone rushing score in the game, he kept his legs moving (and got some help from his teammates) to push a pile six yards into the endzone. He also caught a pair of balls out of the backfield for 15 yards. He was easily the best looking back on either team in the game.

All other RBs – Big Loser. Rhamondre Stevenson, Khalil Herbert, Kylin Hill, Elijah Mitchell, and Larry Roundtree III are all loser coming out of this game Hill had the best yards per attempt out of the bunch with 2.5 with Mitchell and Herbert at only .5 yards per attempt. As mentioned in the opening paragraph the defenses really showed up but unfortunately, these backs didn’t put on a performance that would help their draft stock for the NFL or fantasy. Surprisingly Kylin Hill didn’t get used in the passing game with a single target that he could bring in. The others did get some work as Roundtree took two catches for 19 yards and Mitchell also caught two for 10 yards.

There were two winners at tight end, Kenny Yeboah and Quintin Morris. Both TEs outshone some of their wideout teammates. Yeboah went two for 27 yards and one of only two touchdowns in the passing game for the National Team. Morris caught three of four earning 52 yards, second-most on the team. They are probably going to be day three picks but they might have done enough today to give themselves a small boost.

The only “losers” could possibly be Hunter Long who didn’t play and Noah Gray who had what could have been a touchdown ricochet off his fingertips. Had Gray brought in that one, admittedly tough, catch, it might have bumped him up to being a winner on the day.

Bonus: Quinn Meinerz Offensive Lineman – Winner. If you only watched his workout video, or maybe his videos of him dunking at more than 300 pounds, you’d probably walk away liking and rooting this young man (I know I did!).

Now the fun of Spring Scouting starts! There are about three months to grind tape and study analytics before the NFL draft and another few months (maybe) until Fantasy Drafts. Stay tuned for more NFL Draft and Rookie content!

When Seth was staying home to care for his newborn twin boys, he decided to take his passion for football and fifteen years of fantasy football experience to the next level. This was the birth of “the at-home dad”. For the past three years, Seth has been writing and podcasting about all aspects of football. He writes the weekly RBBC article as well as being a co-host of the Fantasy FAQs podcast.