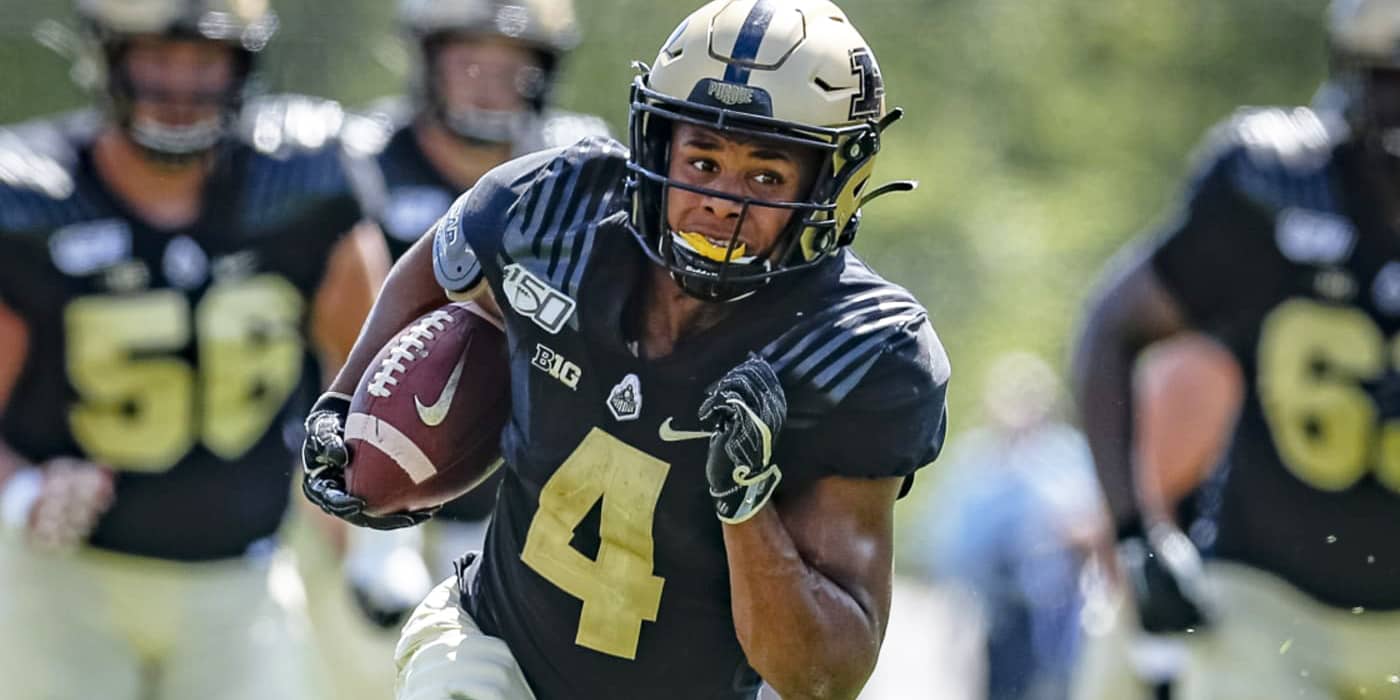 Rondale Moore has always been questioned regarding his size. When the wide receivers coach at Purdue asked: “How big are you, really?”  His answer, “How big is fast?” The diminutive wide receiver has heard the questions and naysayers his entire career.  He has answered the questions with his on-the-field play and his off-field work ethic for his whole career.

Now he looks to take his 42” vertical and 600-pound squats to the next level.  After three years at Purdue, Moore will enter the 2020 NFL Draft.

In Moore’s Youth Football League in New Albany, Indiana, there was a special mercy rule put in place just for him.  He was scoring so many rushing touchdowns as a quarterback that when the games got too far out of hand, the referee would inform Moore’s coach that his quarterback could only throw or handoff for the rest of the game.

His dominance did not stop there.  In his high school junior year, he transferred from New Albany to Louisville’s Trinity High School to concentrate on football.  Per rules, he had to sit out one year.  In his one year of eligibility, he had 109 receptions for 1,478 yards and 16 touchdowns. He also had 537 rushing yards and seven touchdowns on 50 carries while returning two punts for touchdowns.  He was named Gatorade Kentucky Player of the Year and was the recipient of Louisville Quarterback Club’s Paul Hornung Award.

For his three years at Purdue, he only has one full year of playing.  His freshman year, he played 13 games.  He finished with a school-record of 2,215 all-purpose yards, with 12 receiving touchdowns and two rushing touchdowns.  He is the only true freshman to win the Paul Hornung Award as college football’s most versatile player.

There will be no 2021 NFL Combine due to Covid-19.  The schools and their athletes will depend on their Pro-Day. Purdue’s Pro-Day will be Tuesday, March 23rd at 830 am.

Moore’s size is both his strength and weakness.  First the weakness, there are currently 17 wide receivers on the NFL’s 32 team roster who are 5’9” or shorter.  Three of those are starters in the NFL, Cole Beasley, Jamison Crowder, and Marquise Brown.  Neither of the three had over 1000 receiving yards in the 2020 season, although Beasley came close (967).

There are also questions regarding his route tree.  According to Pro Football Focus, 77% of Moore’s targets were less than nine yards down the field.  In 2018 35% of his targets were from either a screen pass, sweep, or flare.  His ability to separate off tight press coverage is a concern, especially when going against NFL-caliber defense.  And it is concerning that in 17 games, he has had 13 dropped passes.

And then there is the question of his durability.  In the last two seasons, Moore has played in only seven games. His 2019 season was cut short after four games with a hamstring injury, while his 2020 season was a mixture of opt-in/opt-out decisions only muddled by reports of a “lower-body injury.”

There are strengths to his game.  He accelerates well off the line, and once the ball is in his hands, his vision and movements are more like a running back than a wide receiver.  He is built low to the ground, which makes him hard to cover on short and intermediate levels, and his lower frame also makes him harder to tackle.  Per PFF in 2018, Moore had 37 broken tackles, the highest total for all FBS receivers.  And his 349 yards after catch also led all FBS receivers.

His versatility is also on display as he averaged 19.4 yards on kick-off returns and 6.9 yards on punt returns.

If there is any doubt that he can play with “the big boys,” just check out his 2018 film against then-unbeaten Ohio State.  In Purdue’s 49-20 upset of #2 Ohio State, Moore had 12 receptions for 170 yards and two touchdowns; it was his breakout performance against a bevy of soon-to-be NFL players across the field.

He also possesses an unyielding work ethic.  This work ethic led him to complete his college degree in two-and-half years while playing Division 1 football and dealing with global pandemic and injuries.

To say that Moore is a “gadget player” isn’t a knock on him, but a plus on what he can bring to a team.  While last season Aaron Rodgers proved he didn’t need additional help to be an MVP caliber quarterback, the lack of diversity stopped the team short of the ultimate prize.

Moore would be a good fit for a Green Bay Packers offense that has relied on Davante Adams’s 32.3% target rate and 39.2% air yards share.  With the likely departure of Aaron Jones in free agency, the Packers will require the man who can provide diversity from just throwing the ball down the field. His ability to play both in the slot should stir memories of Randall Cobb for Rodgers and Packers fans alike.  While his ability to take the ball out of the backfield and run like a running back should help overcome the loss of Jones.

Moore projects as one of those players who will be really good on the field for his team, but not so much in the fantasy football realm. His dynasty fortunes literally are dependent on where he lands.  If Moore falls to a team that only sees his value as a kick return specialist, his dynasty stock is trash.  If he happens to land on a team with a creative thinking offense, his dynasty stock rises slightly.  It is still a hit or miss proposition.  You will be waiting for Moore to break the big one, which isn’t conducive to a good starting line-up.

Moore has been compared to Tyreek Hill, but without the off-field drama. Mike Renner, lead draft analyst, has declared, “While he’s not Tyreek Hill, he is the closest thing we’ve seen in recent drafts.”