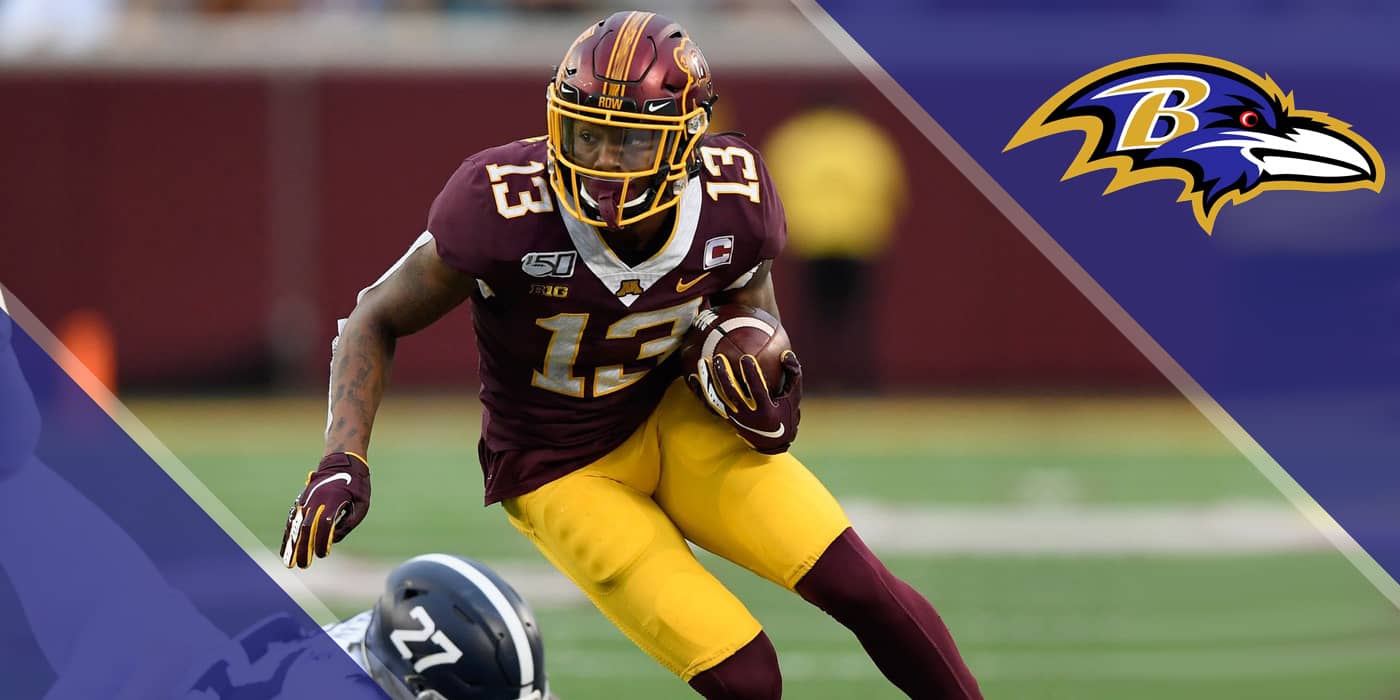 Watching Rashod Bateman drafted 27th overall by the Baltimore Ravens sent my fantasy mind spinning at all of the possibilities that will unfold for this young man. Bateman is comfortably my second-ranked receiver in this rookie class and I’m not sure there was anyone else that was close outside of Jaylen Waddle. Bateman accounted for 40% of his team’s receiving yards and receiving touchdowns in college. To put that number into perspective, that’s more than Julio Jones, Stefon Diggs, and Tyreek Hill all accounted for in college. Bateman also only played 31 career games but amassed an astonishing 2,395 receiving yards on 147 receptions and 19 touchdowns. Yes, we all saw the monstrous season that DeVonta Smith just had, but that is an outlier season from a senior. Bateman’s best season came as a sophomore. The younger a breakout age the better in terms of predicting fantasy success. Bateman is also an athletic freak and has the build of a prototypical, elite wide receiver. When he is the #1 receiver on a team (which he should be) he is an absolute handful to deal with.

Bateman has the skill set to be a transcendent talent at the wide receiver position for years to come. He has the build and the speed to work the outside and make Sundays an absolute pain for a team’s top corner. The body control that he possesses while he is in the air is something out of a science fiction movie as he seemingly floats and glides with ease. He has a flurry of moves that can be used to create separation immediately on the line and high-points the ball very well. He isn’t known as a body-catch guy as he is very comfortable adjusting to the ball where it is thrown and routinely catches passes that are a little more difficult for an average receiver to make. His after-the-catch ability is his best attribute as he quickly gets upfield and makes defenders miss with ease. His route running can be a little tight sometimes which can allow for corners to stay with him, but again, his speed mitigates that factor.

In regards to redraft leagues, Bateman is comfortably locked in as the top receiver on Baltimore’s depth chart and should immediately see WR2 production this year. I know there are a lot of concerns about the play of Lamar Jackson and how the Ravens consistently run the ball, but that could change a little bit this year. Greg Roman has expressed that he wants to throw the ball a bit more and unfortunately, Jackson didn’t have a truly dominant receiver for the past two years. Insert Bateman and he immediately should become Jackson’s favorite target not named Mark Andrews. It’s also clear that Jackson likes throwing to bigger players that can outmuscle defenders and win at the point of attack (again, Andrews), so look for him to rely on Bateman early and often as the outside threat in this *hopefully* not so one-dimensional offense.

In dynasty leagues, he still remains my #2 wide receiver of the class. In fact, if Ja’Marr Chase hadn’t gone to Cincinnati, due to landing spot Bateman might have been my #1 guy. This landing spot shines a huge light on Bateman to eventually become a fantasy superstar in the years to come. He is going to be te #1 guy on this Baltimore team. Obviously, they liked him enough to use 1st round draft capital on him and he has a proven track record of production when he is the alpha receiver. Yes, I am concerned that he will have some overshadowing from the run game as that is Baltimore’s strong suit. But I’m buying talent and production over a not so good, but good enough landing spot. As I said, he should be the #1 receiver in this offense and once he gains Jackson’s and Roman’s trust, we should see him having the ball thrown his way a lot more. He is a solid future WR1 for me with elite upside.

This article was written in two phases. The following was Pre-NFL Draft profile written by Brandon Sysak

In another stacked wide receiver class, many draft prospects are trying to make a name for themselves in the 2021 NFL Draft. Some will have an easier time, such as DeVonta Smith and Ja’Marr Chase, but many talented players are slotted to go in the late first/early second round who could be just as impactful as those selected at the top of the draft.

One such prospect is Rashod Bateman, a junior who played the last two-plus years as a Minnesota Gopher.

Bateman comes from the small town of Tifton, Georgia where he excelled as a high school athlete. Georgia is one of the many football hotbeds throughout the nation, especially when you consider the recruiting class Bateman was a part of. Notable recruits from that class include Trevor Lawrence, Justin Fields, Azeez Ojulari, and Jaycee Horn among others.

During the past college football season, when the Big Ten football season was in flux back in August 2020, Bateman actually stepped away from the Minnesota football program and planned to opt-out so he could prepare for the 2021 NFL Draft. But, when things came together and games were scheduled again in light of the COVID-19 pandemic, Bateman was able to work with Minnesota along with the NCAA and was able to play again. While he only played five games in 2020, Bateman was able to make a positive impact on the program and gain some needed reps to prepare for the next level.

When looking at Bateman as an NFL prospect, there is a lot to like about the wide receiver. His size and speed will make him a matchup problem for opposing defenses at the next level. He can be moved around the field to play either on the outside of the formation or in the slot. Whichever team drafts him will get a complete possession wide receiver who can make an impact right away.

One area where he can be especially dangerous is in the red zone. Over the last two seasons, Bateman had eight touchdowns from within the red zone and was a constant target for Tanner Morgan in that area of the field. Look for his NFL team to do the same and put him in a position to score often.

Bateman also has an explosiveness that can turn any catch into a big play or touchdown. During the 2019 college football season, he was one of only three wide receivers to catch more than 60 passes and average more than 20 yards per reception (CeeDee Lamb and Ja’Marr Chase). If he can find a way to translate that skill to the NFL level he will be a solid selection in the first round.

While there is plenty to like about Bateman, there is one major question that scouts and general managers alike will need to answer before making the call to select him: does Bateman have what it takes to be a top-level wide receiver?

Bateman played his best during 2019 when defenses were having to contend between him and current Tampa Bay Buccaneer wide receiver Tyler Johnson. When you watch how Minnesota played throughout that year, both players were able to find ways to feed off of what was given to them as they often had to pick one player or the other to focus their coverage on.

Now, that is not Bateman’s problem per se, he can only do what the coaching staff asks of him and take what the defense gives him but when you are going to be a mid-to-late first-round pick, it is not unrealistic for that team to expect him to come in right away and help their offense. It will be up to Bateman to put in the work and show what he can do on Sundays but his showing this past year as a Golden Gopher was not as positive as it could have been.

While he likely won’t last all the way to the 27th overall pick, one of the best spots Bateman could land at is in Baltimore. The Ravens were one of the worst passing offenses last year, ranking at the bottom of the league in multiple statistical categories such as completions, attempts, yardage, and passing first downs. Albeit, they did have a stellar running attack that was able to keep them in many contests, their shaky passing game is one glaring flaw that is keeping the Ravens from being a true Super Bowl contender. They already have some talented players in their passing attack, such as Marquise Brown and Mark Andrews, but those players are inconsistent, to say the least, and Baltimore could really use a consistent, possession receiver who can be worked into their offense and make an impact right away.

This is where Bateman would shine. He would join a Ravens team with a scheme/coaching staff in place that would be able to work Bateman into what they already have without putting too much pressure on him to save their offense right off the bat. But, if he excels and can immediately translate his skills to the NFL, he would be in a great spot to make Baltimore fans and prospective fantasy owners very happy.

Bateman will likely not be a dynasty asset that is valued like some of the other wide receivers who will be selected early in this draft but he presents a massive amount of potential and value in dynasty drafts. He will be someone to watch for in the mid-to-late first round of your rookie drafts after Smith, Chase, and Jaylen Waddle are off the board. While a lot of his value will be tied up in the team he is selected by on Draft day, Bateman is still a player that should be considered whether your roster is contending or rebuilding. He has the talent to be a solid  Flex option each week this season and will look to build on his upside for years to come.