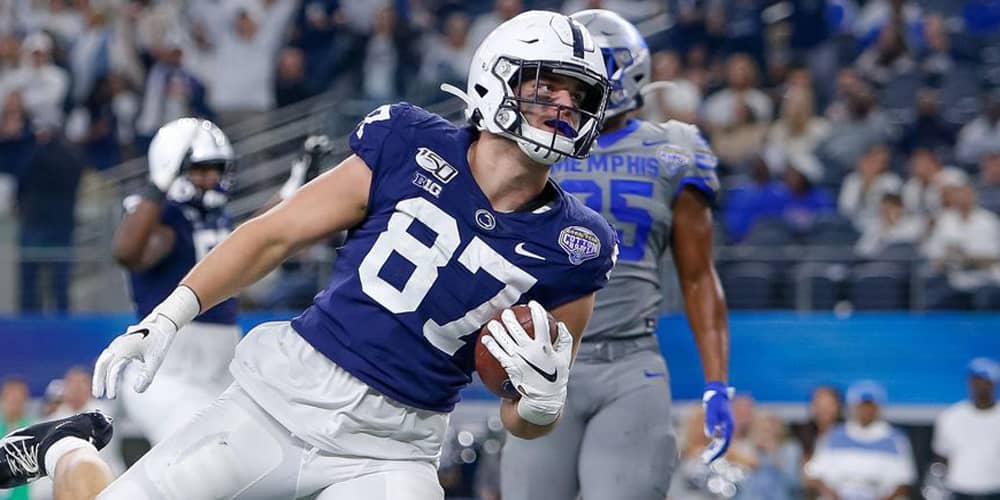 Pat Freiermuth broke onto the college football scene as a freshman in 2018 and has since developed into an enticing tight end prospect for the 2021 NFL Draft class. Freiermuth is built like a prototypical NFL tight end; he has a big body, great hands, and the ability to make contested catches; however, Freiermuth does have aspects to his game that need to be improved to become an elite tight end at the next level. He has the potential to become a top ten fantasy tight end in the future but may never push elite status in fantasy.

Despite only playing four games in his junior season Freiermuth nearly matched his statistical output from his breakout freshman year. In 12 games as a freshman, Freiermuth had 26 receptions, and he had 23 in the four games this past season. Pat had 368 yards in his freshman season and 310 in the four games last year. The only stat that Freiermuth did not match in his injury-shortened junior season was touchdowns. Freiermuth only had one touchdown before going down with his shoulder injury, whereas he had eight touchdowns on his 23 catches as a freshman.

Freiermuth’s greatest strength is his catching ability. When you turn on the tape of Freiermuth, he shows the ability to bring the ball inconsistently and anywhere on the field. Freiermuth can go up above a defender with his size and bring down the catch. He does not let the ball come into his chest but instead extends his arms away from his body and uses his great hands to bring in the catch. Freiermuth runs clean routes as well, he is not the fastest or most athletic tight end, but he makes up for it with his route running. Freiermuth has a very subtle way he moves as he runs routes, but it is done so well that he can create space against any defender. If it is a linebacker lining up against him, Freiermuth can win with the route running, while Freiermuth can use his size and physicality to create space against defensive backs.

While Freiermuth can create space with his route running, he does not possess elite speed or athleticism at the tight end position. He will not break away from defenders with speed or rack up the yards after the catch. Pat can break tackles and has a good stiff arm to make plays after the catch. Freiermuth does need to develop as a blocker as well. His size lends Friermuth to be an inline tight end, but he needs to develop his blocking ability at the next level. He has a toughness to his game which lends itself nicely to growing as a blocker.

Freiermuth comes into the NFL draft as my tight end three in the class behind Kyle Pitts and Brevin Jordan. Freiermuth is the prototypical tight end out of the three; he has the size and hands teams have looked for over the years in the position. Recently teams have favored the more athletic tight ends, but the more prominent, physically imposing players still have a role in the NFL.

Freiermuth can become a solid player at the tight end position but lacks the athleticism to become a truly elite option for fantasy football. Pat Freiermuth reminds me a lot of Jack Doyle. Doyle, over the years, has been a serviceable tight end in the NFL; he can be a reliable receiving option but does not possess the skills to be a dominant tight end. Doyle has provided value for fantasy, especially in PPR leagues, due to the value provided by his volume of targets and the consistency to turn the targets into catches. Freiermuth presents a similar value where he can be a solid low-end tight end one in fantasy but does not provide the ceiling the Pitts or Jordan do in this tight end class.

The ideal landing spot in the NFL draft for Freiermuth in my mind is the Indianapolis Colts. Freiermuth can take over for Jack Doyle and would get the opportunity to play with a quarterback who loves to target the tight end position in Carson Wentz. Another excellent option for Freiermuth would be the Jaguars. The Jags are in desperate need of a dominant player at the tight end position. Freiermuth can provide a safety valve for the new rookie QB the team takes with the number one pick in the draft. Going into his rookie year, I do not expect Freiermuth to have a significant impact in fantasy. He is worth stashing on your taxi squad in dynasty football for the potential that he become a consistent low-end tight end one in the future.