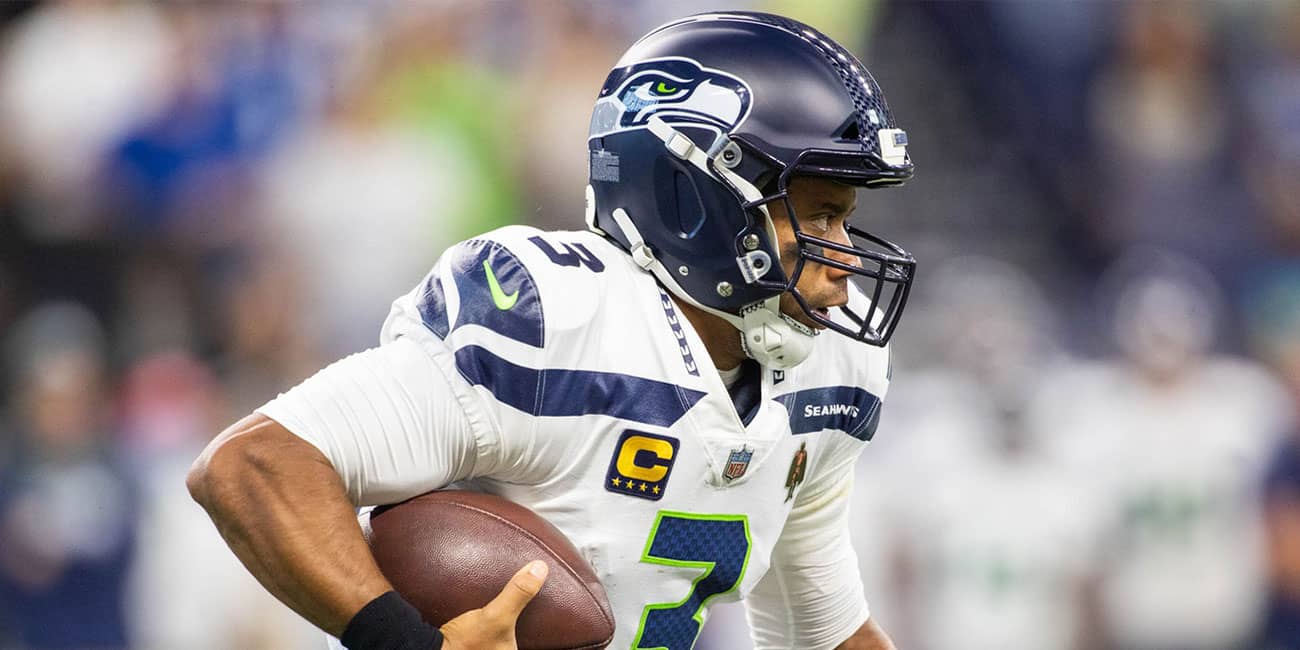 A new week of daily fantasy on DraftKings. Here is a breakdown of Week 3 options.

Through the first two weeks of the season, Russell Wilson has thrown for 597 yards, six touchdowns, zero interceptions on 40-for-54 passing. Wilson gets a favorable matchup against the Minnesota Vikings, who just gave up 400 yards and four total touchdowns on 29-for-36 passes. Although Murray threw two interceptions, Wilson has not had that problem this season thus far.

Wilson is cheaper than Murray, Mahomes, and Jackson. He has averaged 26.7 DFS points on DraftKings through the first two weeks. This could be a close game, meaning Wilson will likely attempt to throw the ball down the field early and often to Tyler Lockett and D.K. Metcalf, as we have seen him often do this season. Wilson should be considered a top-tier QB1 in Week 3.

Despite Justin Herbert putting up 675 yards through two weeks, he has thrown just two touchdowns and three interceptions to start the season. Therefore, his price tag is the cheapest it has been. The Chargers will head to Kansas City for an AFC West showdown against the Chiefs. Both teams coming off heartbreaking losses will look to get a win in what could very likely be a high-scoring matchup.

Herbert will need to throw 2-3 touchdowns in order to keep up with the Chiefs offense. The Chiefs defense gave up 321 passing yards to Baker Mayfield and 346 total yards to Lamar Jackson, along with one passing touchdown and two rushing touchdowns. Last season, Herbert threw for 613 yards, six total touchdowns, and one interception in two games against the Chiefs. He looks to keep that momentum going, as the Chargers look to improve to 2-1. Only three quarterbacks have thrown over 300 yards in the first two weeks this season: Justin Herbert, Patrick Mahomes, Derek Carr. Get ready for a potentially high-scoring game at Arrowhead Stadium.

If you are looking for a cheaper quarterback option, Goff is the player to go with. His price tag and the amount of passes he’s going to attempt makes him an appealing option. Through two weeks, Goff has thrown for 584 yards, five touchdowns, two interceptions while rushing for 60 yards off seven attempts. Goff has completed 64-for-93 of his passes, averaging 46.5 passes per game.

Goff will be without Tyrell Williams yet again, but due to the Ravens offense expected to put up a good amount of points against the Lions defense, Goff will need to continue throwing the ball, making him an appealing option, only if you decide to go the cheaper route to secure a quarterback.

Cooper Kupp has been the best wide receiver this season, in terms of fantasy football. Kupp has looked like Isaac Bruce back during the great show on turf. Through the first two games, Kupp has seen 16 receptions on 21 targets. Kupp has had 271 receiving yards, and three touchdowns. In a favorable matchup, as well as a potentially high-scoring game, Kupp should be added to DFS lineups for Week 3.

Matthew Stafford seems to favor Kupp over Robert Woods, and although his price tag has gone up, he should be a solid WR1 in Week 3. There are eight wide receivers who are more expensive than Kupp, and not as productive, so it seems like a no-brainer to include him in DFS lineups.

Keenan Allen has been targeted 21 times in the first two weeks, receiving 13 catches for 208 yards. He gets a favorable matchup in Week 3 against the Kansas City Chiefs, and Allen will see numerous targets from Justin Herbert. In Week 2, Marquise Brown had six catches for 113 yards, and one touchdown. Despite Allen not getting a touchdown thus far, he was able to get 100 yards against the Washington Football Team and 108 yards against the Dallas Cowboys.

The attention will also be turned to Mike Williams who has seen 22 targets thus far, meaning Keenan Allen could have a field day. This could very well be the game where Allen not only surpasses 100 receiving yards, but also receives a touchdown.

Sterling Shepard has received 16 receptions off of 19 targets for 207 yards, and one touchdown. Daniel Jones seems to favor Shepard over Kenny Golladay, as Golladay has seen 14 targets, and he has been limited this week with a hip injury. In a possibly high-scoring game, Shepard has a high ceiling, and he is a low-risk, high-reward type player.

Shepard is primed for a big game in a favorable matchup. His chemistry with Jones is growing on a game-to-game basis, and he seems to be Jones’ favorite target. If Evan Engram (calf) returns in Week 3, that could open up things for Shepard, as more attention will be turned to the tight end position.

In Week 1, Austin Ekeler was not targeted by Justin Herbert, possibly due to his hamstring injury. In Week 2, however, he was targeted nine times and finished the game against the Cowboys with nine catches for 61 receiving yards, as well as nine rushing attempts for 54 yards. In a game that ended 20-17, Ekeler was able to secure 22.5 DFS points on DraftKings.

Due to his price tag, Ekeler should be added to lineups because it will be a high-scoring matchup. The Chiefs defense gave up a total of 101 yards and two touchdowns to Nick Chubb and 93 total yards to Ty’son Williams. Not to mention 107 rush yards and two touchdowns by Lamar Jackson against the Chiefs. Ekeler is a safe RB1 play for Week 3, and he could be counted on even more this week because Herbert will have to get off more passes to keep up with the Chiefs offense, meaning Ekeler should be in line for more targets.

Who would have thought that seven running backs would be more expensive than Saquon Barkley in a main slate of games? Well, Saquon has not looked great through the first two weeks of play, but he gets a favorable matchup in Week 3 against the Atlanta Falcons. This could turn out to become a breakout game for Saquon.

Initially, the Giants were planning on Saquon to return to action in Week 3. But he returned in Week 1, and slowly has ramped up activity. This could be the game where Saquon will be unleashed, against a very favorable defense. Barkley has yet to score a touchdown this season, but all signs point to a potential breakout game, and with that price tag, it’s worth the risk to add Barkley to lineups.

Antonio Gibson is another player who could see a breakout game in Week 3. In the first two weeks, Gibson has seen 33 carries for 159 yards, and five receptions for 22 yards. He should be involved more in the passing game for Week 3 against a high-octane Buffalo Bills team.

This is a tough matchup, but due to the volume of touches Gibson will see, and his price tag, he should be considered an add-on to DFS lineups with Darrell Henderson Jr. (ribs), and D’Andre Swift (groin) battling injuries.

Hockenson seems to be Jared Goff’s favorite target, and with Tyrell Williams out, Hockenson will likely be the go-to red-zone option for the Lions, more than ever before. For his price tag, consider adding Hockenson either as a tight end or in the flex option for Week 3.

Kyle Pitts gets a favorable matchup in Week 3 against the New York Giants. Pitts has seen 14 targets through the first two weeks of his rookie season. He has nine receptions for an impressive 104 yards, averaging 11.5 yards per catch. He has yet to catch a touchdown, but Week 3 could be the week.

In Week 1, the Giants defense gave up six receptions for 62 yards to Noah Fant. In Week 2, they gave up five receptions for 45 yards to Logan Thomas. Pitts is quick as a tight end, and he could be a go-to target for Matt Ryan in the red-zone. Pitts is due for a breakout game, and it could come in Week 3. For his price tag, Pitts is worth adding to DFS lineups.

Jared Cook has seen 13 targets in the first two weeks of the season. He’s had eight receptions for 84 yards. Cook has not recorded a touchdown yet, but he did have one called back in Week 2, and it seems like Justin Herbert trusts Cook in the open field, as well as in the red-zone, so expect to see Cook targeted more as the season goes on.

In a matchup against the Kansas City Chiefs, Cook should be added in DFS leagues because of his price tag. He is a low-risk, high-reward type player. Cook could see an uptick in targets, as this could be a high-scoring matchup in Kansas City, and Herbert will need to throw the ball early and often.