Week 6 featured two fantastic prime-time shootouts: the as-expected Chiefs-Patriots tilt on Sunday Night Football, and the much more surprising 49ers-Packers game on Monday night. The Rams maintain their stranglehold on the top spot in this week’s rankings, but the rest of the top ten continues to see a lot of fluctuation.

The Week 7 Power Rankings focus on impact players for each team. As always, these rankings loosely reflect my current Super Bowl odds.

Superstud RB Todd Gurley rushed for 208 yards and 2 TDs in the frigid Denver weather to lead the Rams to victory in a tight game when their passing offense wasn’t at its best.

Rookie RB Sony Michel looks better every week. His 106 rushing yards and 2 first-half TDs helped the Patriots build an early lead, forcing the Chiefs to play catch-up for the entire second half.

Appropriately overshadowed by Drew Brees’ record-setting game, RB Mark Ingram returned from suspension in Week 5 and made an immediate impact, totaling 53 yards and 2 TDs…much to the chagrin of Alvin Kamara’s fantasy owners.

WR Tyreek Hill exploded for 7-142-3 in Foxborough on Sunday night. His reward for tying the game late on an electric 75-yard touchdown catch? Getting beer thrown in his face by a classless Patriots fan.

The end of that touchdown catch by #Chiefs Tyreek Hill not exactly a banner moment for #Patriots fans. Especially the Bud Lite to the face. pic.twitter.com/cYS4RC7I6H

Franchise QB Carson Wentz looks to have regained his MVP form from a year ago, which is bad news for the rest of the NFC. Wentz looked decisive, mobile, and accurate in picking apart the Giants, completing 26 of 36 passes for 278 yards and 3 TDs without an interception.

No Dalvin Cook? No problem. Veteran RB Latavius Murray carried the struggling Minnesota rushing attack with a career-best 155 yards and a TD on 24 carries.

The Steelers’ offensive line may have been the real MVP for them in Week 6, paving the way for a bruising 19-111-2 performance from RB James Conner and allowing zero sacks of Big Ben against a formidable Cincinnati defensive front.

WR Tyrell Williams helped the Chargers set the tone early in Cleveland, catching two long touchdown passes from Philip Rivers (he finished with a 3-118-2 line) that gave the Bolts an early lead they would never relinquish.

Aaron Rodgers’ late-game magic was paramount to the Packers’ comeback, but it was nice to see* veteran K Mason Crosby, one week removed from an abject meltdown against the Lions, go 3-3 on extra points and 4-4 on field goals, including the game winner as time expired.

Second-year WR Tyler Boyd has become a reliable #2 WR for the Bengals this season. In Week 6, he made several difficult catches and finished with 7 receptions for 62 yards and 2 TDs.

Is the Jags’ slump really all on Blake Bortles? The defense was not itself in Week 6, but it’s tough to overlook the latest “Bad Blake” game in which he threw for 149 yards — only 35 yards in the first half. Bortles has 5 INTs in the last two weeks.

In Week 6, rookie WR D.J. Moore flashed the potential of a high draft pick, catching 4 passes for 59 yards. Unfortunately, he also lost two fumbles in what was ultimately a one-possession game.

After blowing a two-score lead over a lesser team and a backup quarterback, the Bears defense has plenty to address this week. Surprisingly, the offense appears to be in much better shape. QB Mitchell Trubisky had his second consecutive 300-yard, 3-TD game, and RB Tarik Cohen totaled 121 yards on only 12 touches.

WR Julio Jones may have failed to score a touchdown yet again, but he paced Atlanta’s offense in a shootout win, catching 10 passes for 143 yards. Jones is on pace for nearly 1,900 receiving yards this season.

J.J. Watt may be tied for the league lead in sacks, but teammate LB Benardrick McKinney stood out for the Texans on Sunday, recording 11 tackles and a sack against the Bills.

WR Doug Baldwin seemed to return to pre-injury form in London for the first time this season, leading Seattle in targets and posting a 6-91 line.

Playing with a depleted crop of skill position players in Week 6, Washington’s tight ends led the way on offense, as Jordan Reed and Vernon Davis combined for 8 catches and 84 yards — over half of the team’s receiving total. 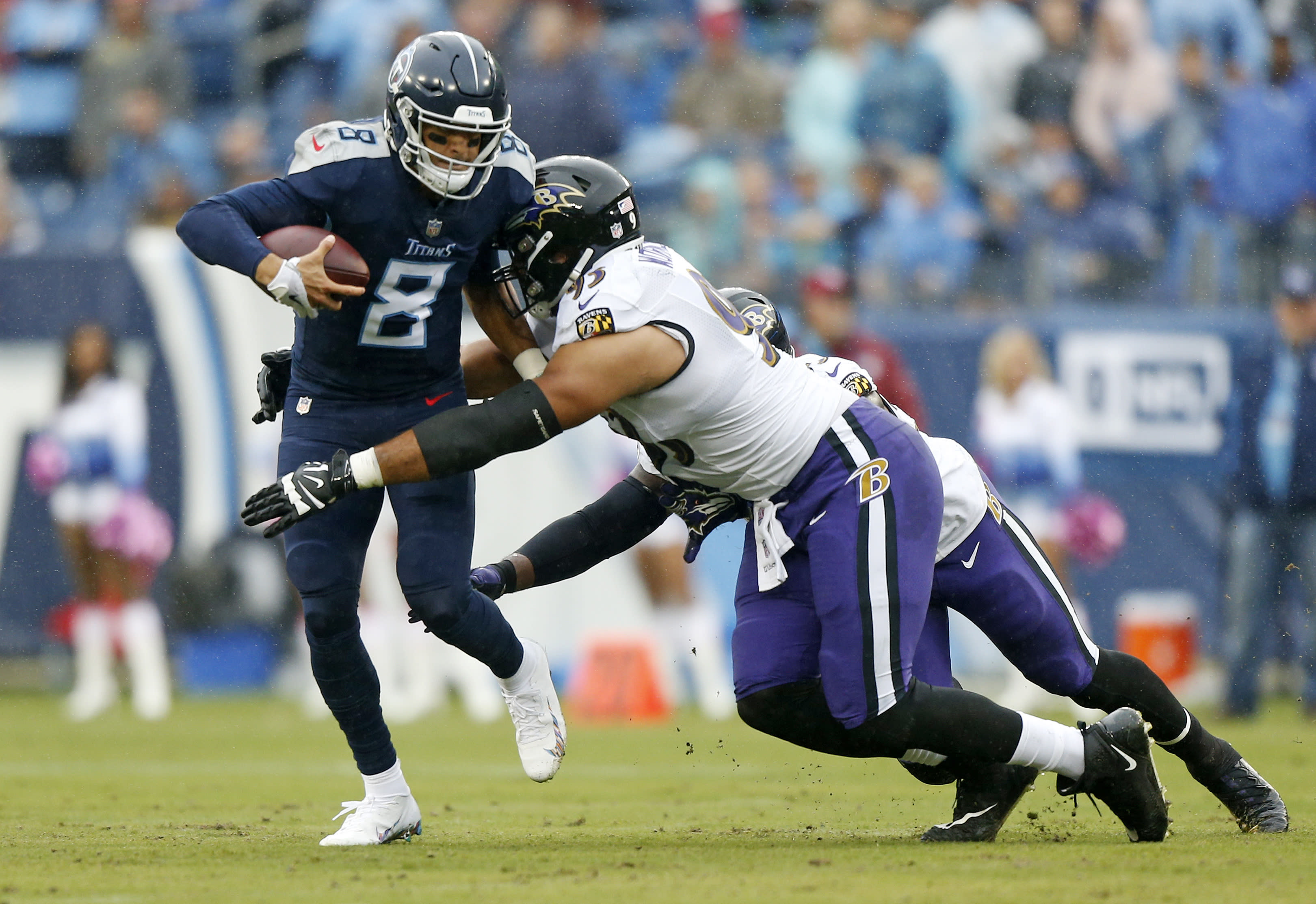 The Ravens defense is menacing, no doubt, but the Titans offensive line owes QB Marcus Mariota an apology after allowing a near-record 11 sacks in their demoralizing Week 6 loss.

The Browns offense struggled as a whole, but the plights of the rookies were most glaring. Baker Mayfield threw 2 INTs and finally looked like a rookie QB, and WR Antonio Calloway caught only 2 of 10 targets (!) for 9 yards.

In QB Jameis Winston’s first regular season game of 2018, the Bucs trailed early and nearly completed a great comeback. Winston led the Tampa Bay half of the shootout with 395 yards and 4 TDs, but threw two costly INTs.

Emmanuel Sanders has far and away been the team’s #1 WR this season, and that continued on Sunday as he hauled in 7 catches for 115 yards and a score in Denver’s failed comeback attempt. Unfortunately, his taunting penalty in the first half likely cost the Broncos a score, and possibly the game.

The biggest impact player for the Lions in Week 6 was much-maligned Dolphins’ backup QB Brock Osweiler. A mid-morning injury replacement for Ryan Tannehill, Osweiler passed for 380 yards and 3 TDs against what many thought was one of the league’s best defenses, handing the division-leading Bears a loss and doing the Lions a favor in the process.

In his return to the lineup, second-year RB Marlon Mack rushed for 89 yards on only 12 carries. Mack wasn’t perfect, but he looked explosive and flashed the type of potential the Colts saw when they drafted him.

WR Albert Wilson gave replacement QB Brock Osweiler a big assist by leading the team in receiving with a 6-155-2 line, which included a long touchdown catch-and-run in the 4th quarter to send the game to overtime. Wilson has 4 TDs through 6 games.

QB Dak Prescott finally put together a complete game, and WR Cole Beasley was one of the primary beneficiaries, leading the Dallas receiving corps with 9 catches for 101 yards and 2 TDs.

The Jets offense had a well-rounded performance against Indy, but perhaps the most promising part was the first real Terrelle Pryor sighting of 2018. Pryor recorded a 5-57-1 line with Quincy Enunwa out of the lineup.

The 49ers were left for dead after Jimmy G went down with a season-ending knee injury, but no one informed second-year QB C.J. Beathard. On MNF in one of the league’s toughest road venues, Beathard consistently made plays, passing for 245 yards and 2 TDs. Unfortunately, Beatheard’s late INT and overthrow of a wide-open TE George Kittle likely cost the 49ers what would have been a huge upset in Lambeau.

Unfortunately, rookie QB Josh Allen exited the game early with an elbow injury, and is likely to miss “weeks.” In his place, backup Nathan Peterman briefly gave the Bills unexpected hope by directing a scoring drive to take the lead in the 4th quarter, before ultimately throwing 2 INTs — one the game-deciding pick six.

Eli Manning was awful on TNF, reigniting the debate over whether the Giants should have used the no. 2 overall pick on a QB this April. On the other side of that argument is phenomenal rookie RB Saquon Barkley, who carried the entire NY offense with 229 total yards and a touchdown.

Rookie WR Christian Kirk is quickly proving to be fellow rookie Josh Rosen’s favorite target. In Week 6, he led the Cardinals in receiving for the second straight game, with 6 catches for 77 yards.

About QB Derek Carr, Jon Gruden said, “He is on my watch…if he doesn’t play well, I have failed.” In London, Carr passed for 142 yards, no TDs, and a pathetic 4.6 yards per attempt. Draw your own conclusions.