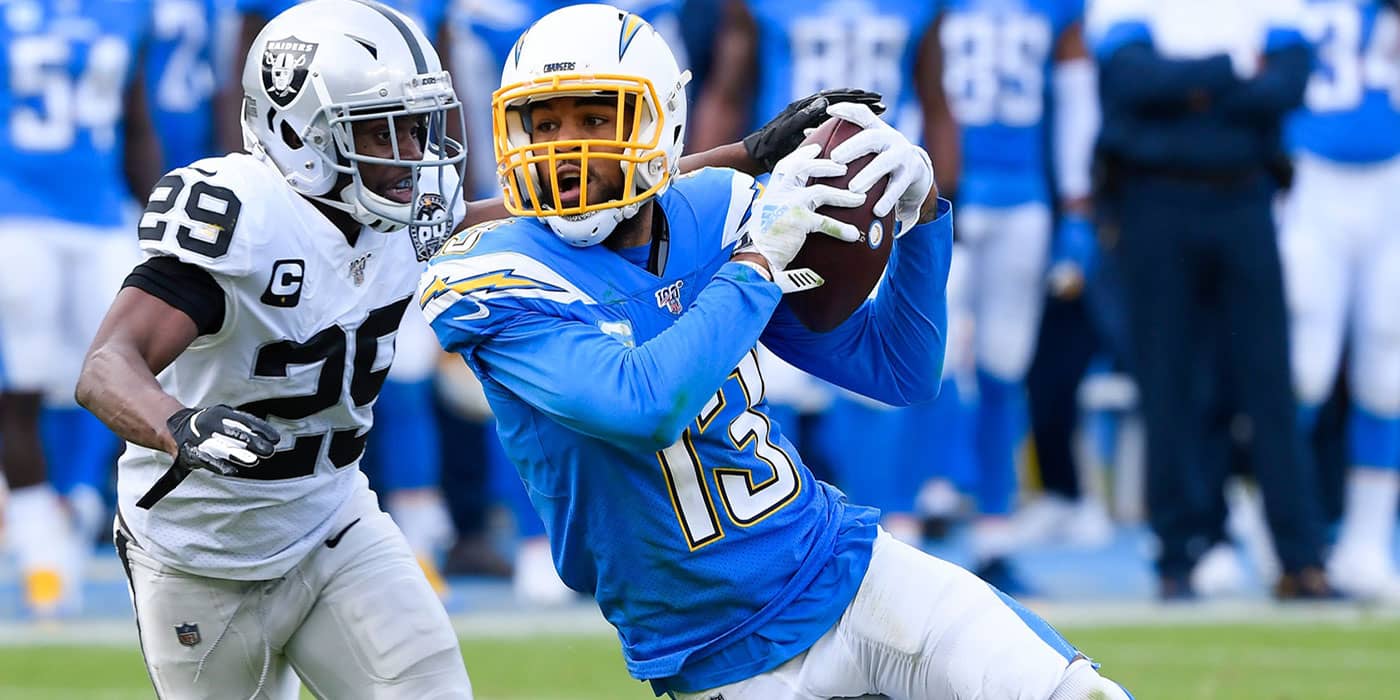 Week 2 has begun, and that means a new week of daily fantasy on Draft Kings. Here is a breakdown of Week 2 options.

Last week, Herbert threw 337 yards against the Washington Football Team. He also had one touchdown, one interception, and one fumble lost. However, the offensive line for the Chargers looked promising, and the Cowboys defense could not stop the play-action by Tom Brady. Herbert could have a big game off of play-action calls in an already potential high-scoring game.

This will be the first game in SoFi Stadium, with fans allowed in the stands for the Chargers. Brady had 32.2 DFS points on Draft Kings against the Cowboys. Austin Ekeler was not involved in the passing game in Week 1, but Herbert still managed to throw for 337 yards. Ekeler is expected to be involved more in the passing game for Week 2, so expect a big game from Herbert, not only yardage-wise but also touchdown-wise.

Trevor Lawrence threw three touchdowns and three interceptions in his NFL debut against the Houston Texans. Lawrence added 332 passing yards, propelling him to 25.1 DFS points on Draft Kings. In Week 2, Lawrence will face the Denver Broncos. Daniel Jones was able to throw for 267 yards and one touchdown, as well as run for 27 yards and garnered a rushing touchdown.

Lawrence will make his home NFL debut in Jacksonville, so he will want to perform at a high-level, and limit the mistakes he made last week. His price tag is such that you will get a low-risk, high-reward type player for Week 2 with Lawrence.

Teddy Bridgewater looked impressive in Week 1 against the New York Giants. Bridgewater completed 28/36 passes, tossed two touchdowns, and had a total of 283 yards. He will face the Jaguars in Jacksonville in Week 2. Tyrod Taylor threw for 291 yards and two touchdowns, as well as gaining 40 rushing yards. That is a positive sign for Bridgewater, as he threw for similar yardage against a better defense last week.

Although Bridgewater prefers short passes, those passes could lead to more yardage with players like Noah Fant, Courtland Sutton, K.J. Hamler, Tim Patrick, and Melvin Gordon as his primary targets. Bridgewater will not have Jerry Jeudy to target for a couple of weeks, but that doesn’t mean he doesn’t have enough options. Due to the matchup and all the targets he has, Bridgewater should be considered the QB for teams that don’t want to spend too much for a quarterback.

David Montgomery will face off against the Cincinnati Bengals in Week 2. The Bengals defense gave up 104 total yards and one touchdown to Dalvin Cook last week. Montgomery saw 18 carries, 108 rushing yards, and one rushing touchdown against one of the top defenses in the league — the Los Angeles Rams. Not only is this a more favorable matchup, but he may be involved more in the passing game in Week 2.

Darrell Henderson Jr. saw 16 carries for 71 yards and one touchdown last week against one of the top defenses — the Chicago Bears. The Rams will head to Indianapolis to face off against the Colts. The Colts defense gave up 91 rushing yards off 16 carries to Chris Carson in Week 1. Henderson is one of the cheaper options, who will likely see 15+ carries in Week 2.

The Rams may take an early lead against the Colts, which could lead to Henderson seeing 20+ touches. For his price tag, Henderson should be considered a low-risk, high-reward type of player.

In Week 2, he sees a more favorable matchup in the Minnesota Vikings, who gave up 150 total yards to Joe Mixon in Week 1. Edmonds is part of the passing game; Murray will look to get Edmonds more involved, especially if this game is closer than the one against the Titans in Week 1. Edmonds should be added for his price, given that he will see his share of touches, at the very least.

Some may wonder why I didn’t include Nick Chubb, Kareem Hunt, Trey Sermon, and Eli Mitchell in favorable matchups of their own. The reason why is because they will likely split the workload. For the price tag, Montgomery is in a better position than Chubb.

Keenan Allen was targeted 13 times in Week 1. He had nine catches for 100 yards against the Washington Football Team. He will face an injury-riddled Dallas Cowboys defense in Week 2. Allen is Justin Herbert’s favorite target, and Herbert will look to target Allen more than any other receiver, yet again, against the Cowboys.

This could end up being a high-scoring game. Keenan Allen should easily see 10+ targets in Week 2 and surpass 100 yards, as well as add one or two touchdowns in a favorable matchup that could be an offensive battle. Allen should be added confidently in DFS lineups.

Allen Robinson did not match the expectations set in Week 1; however, he did see 11 targets, which is a good sign for him. Whether Andy Dalton or Justin Fields is throwing the ball, Robinson will be the main target. He saw 91% of the snaps against the Rams, finishing the game with six receptions and just 35 yards. The Bears will face a favorable matchup in Week 2 against the Cincinnati Bengals in Chicago.

The Bengals defense gave up 250 yards to the Vikings wide receivers. With Robinson’s price tag, DFS contestants should feel confident in adding him to lineups. Expect a big bounce back from Robinson, and he will see similar targets in Week 2.

Tim Patrick will be in the mix for WR2 along with K.J. Hamler until Jerry Jeudy returns from injury. Last week, Patrick saw 70% of snaps, four catches on four targets for 39 yards, and one touchdown. In Week 2, the Broncos will face the Jacksonville Jaguars. The Jaguars defense gave up a total of 449 yards to the Houston Texans in Week 1.

Bridgewater will look to spread the ball around, and although Noah Fant and Courtland Sutton will be the main targets, Patrick was the recipient of a touchdown last week, with Jeudy active. Week 2, Jeudy inactive, Patrick will see a bigger role with the team. For his price tag, Patrick is worth the risk, and he is a low-risk, high-reward play until Jeudy returns to the field.

Rob Gronkowski turned back the clock in Week 1 against the Dallas Cowboys. Gronkowski had eight catches on eight targets for 90 yards and two touchdowns against the Cowboys. It looked like old times, Brady trusting Gronk, and it seemed like Gronk was Brady’s favorite target in Week 1.

Gronk will face another favorable matchup in Week 2 against the Atlanta Falcons. This could end up being a lopsided win for the Buccaneers, but expect Brady to throw the ball early and often against the Falcons, in order to take a commanding lead. Gronkowski seemed like Brady’s go-to in the red zone, and for his price tag, he should be added to DFS lineups.

Noah Fant could be the primary target for Teddy Bridgewater since Jerry Jeudy is out. Fant had six receptions on eight targets for 62 yards in Week 1. Expect Fant to be more involved in the passing game, and as Bridgewater’s go-to red-zone target.

Fant will likely finish as a top-10 tight end, and on a day without Kelce, Andrews, Hockenson, Tonyan, or Thomas part of the DFS pool, Fant seems like the best option with that price tag. If Fant can see 8-10 targets again, he will likely see red-zone targets as well, and capitalize on his opportunities in a favorable Week 2 matchup.

Jared Cook saw eight targets in Week 1 against the Washington Football Team. Herbert was targeting Cook in the open field, and although he failed to catch a touchdown, he was able to finish the game with five receptions and 56 yards. In a favorable Week 2 matchup against an injury-riddled Cowboys defense, Cook should be considered a DFS addition, especially since he is under $4,000.

In Week 1, Rob Gronkowski dominated against the Dallas Cowboys, receiving two touchdowns. Cook is a solid option for Week 2, with a limited option of tight ends for the main slate this week. Cook is emerging as one of Herbert’s top targets, and he could finish just behind Keenan Allen, Austin Ekeler, and Mike Williams in targets for the season.