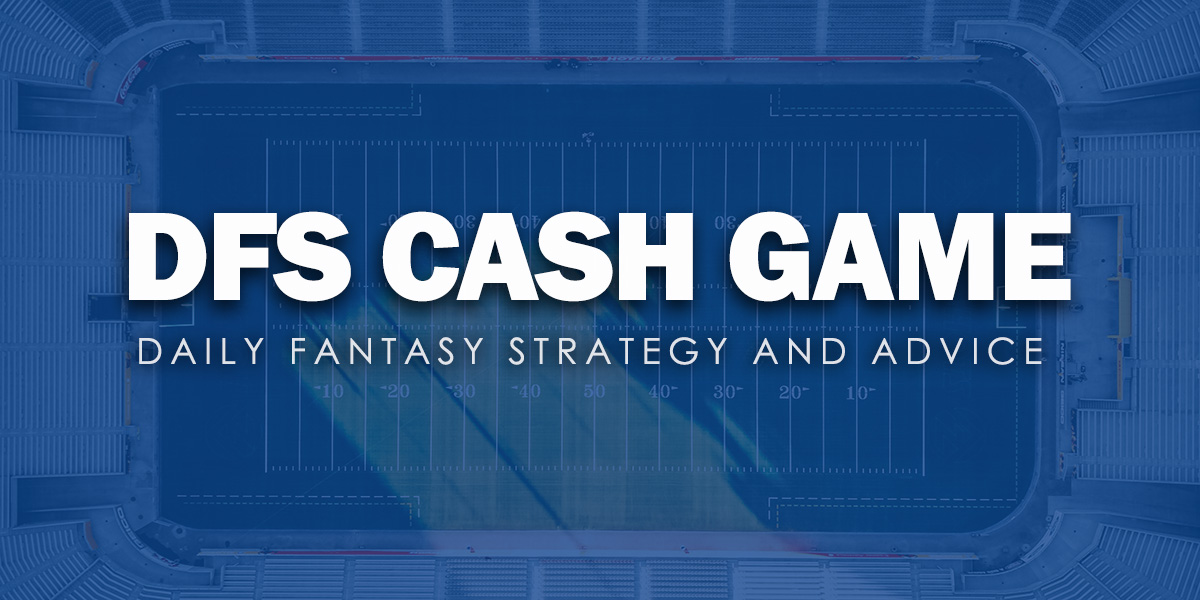 You may have heard of Draft Kings’ flagship weekly contest, the “Milly Maker,” or Fanduel’s “Sunday Million,” but there is a lesser known and equally intriguing subset of Daily Fantasy Sports (DFS) referred to those who play them as “cash games.” A cash game can be loosely defined as any contest that pays out roughly half of the field. This includes 50/50s, double-ups, and head-to-head matches. These are intriguing because while they may not provide the high ROI upside of large field tournaments, there is a safe floor and they might be easier to win than you think.

As mentioned above, cash games are slightly different because they involve lower payouts to a larger percentage of players. The advantage of them is they’re much easier to win. For example, most larger field contests will payout around 25% of the field. In this scenario (assuming all odds are equal), you need to hit 75th percentile outcomes if you want to win any amount of money. In cash games, since about 50% of the field gets paid out, in theoretical probability, you’ll win about half the time. In 50/50s, the top 50% get paid roughed 90% of the entry fee though, so you would need to win 56% percent of the time to turn a profit. A 56% win rate isn’t even that hard to obtain. It’s slightly better than average. This is the draw of cash games. They can become profitable by finding just a slight edge. The rest of this article is devoted to finding that edge.

Now that I’ve laid out the basics of cash games, I’ll get more into the weeds about my general strategy. As mentioned above, since roughly half of the field gets paid out in these contests, I’m not looking for lineups with high variance. Placing first in one of these contests earns you no more than the last person who made the cut. Therefore, I build my cash lineups with players with projectable volume and safe floors. Let’s further break this down position by position.

The most important component of your QB for cash, just like in most other fantasy formats, is their ability to run the football. We want a QB who we know won’t suck, so by playing QBs with a reasonable rushing floor, we can guarantee that a poor passing performance won’t sink us, and an elite passing performance will only increase the odds of our cash lineup placing. You can go about this in many different ways. My preferred method is to spend down on a QB that has a rushing component, but whose passing (historically) hasn’t measured up to the likes of Murray or Jackson, and thus why his price is much lower than those guys.

Unlike other positions, I’m much more likely to find myself paying up at RB. Scoring-wise, the position tends to fall off quicker than at WR, due to factors such as injury or a committee backfield, so I don’t mind allocating extra salary to this position. This could even include a player like Christian McCaffery, who is bound to score at least 20 PPR points anytime he is active. I then tend to spend down for my RB2. This gets easier as the season goes along since an RB who is projected to be the backup might see starting reps if the RB above him gets hurt after prices have been released. In this situation, you end up getting a starting RB for the salary of a backup.

I like to play WR in cash based on the construction of the rest of my lineup. There are more startable options, so I’m fine playing them around the other players on my roster. I’ll eat the chalk too if it makes sense (a la Cooper Kupp last year). This position is different than RB as an injury to a starting WR won’t prop up the guy behind him on the depth chart too much. Look for guys that seem like they are priced a little cheap based upon their expected volume and point potential.

I tend to play TE in cash the same way I play it in other fantasy formats: namely, the “late or great” strategy.” This means I’ll either swallow the large salary and play someone like Kelce or I’ll completely punt on the position and get a much cheaper option that will let me spend up at the other positions. Historically, TE falls off a cliff in PPG after the top 3 or so, so I don’t see the reason to get a mid-range guy when I can save $1,000 and get a cheaper TE with similar upside.

Similarly to redraft leagues, I want to play WR in the FLEX whenever I can. However, there are a lot of weeks where playing an RB in your FLEX makes a lot of sense. There will be weeks where there are three relatively cheap RBs that project for massive workloads and it would be a crime to not play all three. If that isn’t the case though, I’ll just play a fourth receiver that makes sense with my lineup construction.

I hesitate to simply say “ignore DST” but that’s essentially how I feel. DST tends to be highly volatile, so it’s just not worth it to pay up for an expensive one. I tend to play the cheapest option that plays against a relatively bad offense. If I have salary left over, maybe I’ll spend up a little, but most weeks it’s advisable to punt on this component of your cash lineup.

Cash, unlike redraft fantasy football, is a puzzle you have to put together based on the allocation of your limited salary. Unlike large tournament DFS pools, we don’t need to beat a large number of teams, we only need to beat about half of them. Therefore, we’re trying to find bargains, whether that be a player we find is fundamentally misunderstood in their pricing or a player who usually doesn’t play as much, but is slated for a larger role in that specific week. Check back each week of the season as I use this template to build a cash lineup that will provide us profit week-over-week.