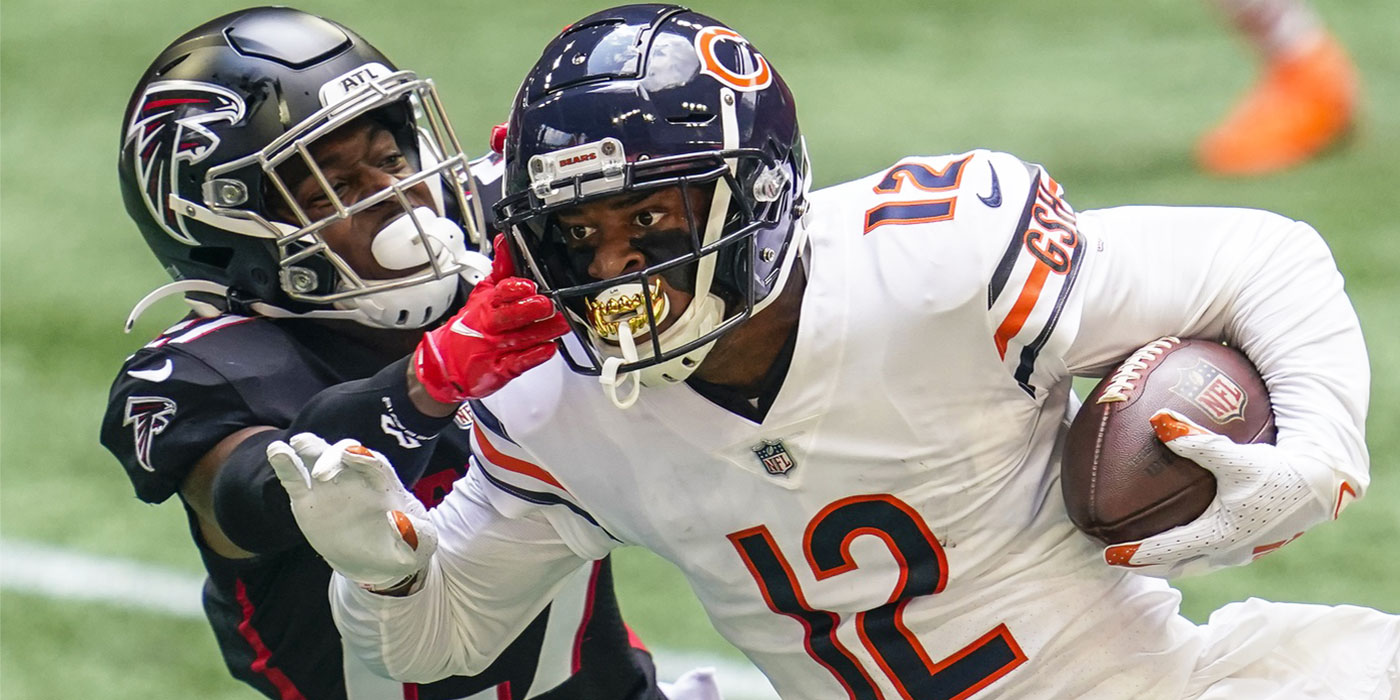 For the second week in a row, Monday Night Football will feature a cross-conference matchup with the Chicago Bears traveling to Pittsburgh to take on the Steelers. Both teams had playoff aspirations going into the 2021 season but so far they have fallen behind in their divisions and are trying to stay in Wild Card contention. Chicago has turned their offense to their young quarterback while Pittsburgh has continued to rely on their veteran signal-caller. They both will desperately need a win on Monday Night to keep their postseason hopes alive, which should lead to a great game on MNF.

The Steelers will be home favorites on Monday night as they take on the Bears, a team that has been easy to bet against in 2021. I know someone could write essay for me online about how this is not the week to double down on the Monday Night Game after a tone of upsets, but when looking at spreads where Chicago is the underdog, their opponents are 5-1 with the only team not beating the spread being Las Vegas in Week 5 in a game the Bears won outright. Pittsburgh will need to win by at least seven points to beat the spread on Monday Night, something they have done twice this year. Take the Steelers and the points this week.

Among the group of elite quarterback prospects in the 2021 NFL Draft, one of the most heavily discussed guys was Justin Fields. Many scouts and fans alike had questions about Fields’ abilities and how they would translate to the NFL. It seemed like whichever team selected him would give him time to develop but Chicago had other ideas for their young gunslinger. So far, Fields has shown some flashes as to what he can do in the Bears’ offense. But at other times he has made some mistakes, which is to be expected for any rookie. Through his first six starts, Fields has a 2-4 record and has averaged 153.5 passing yards on a 60% completion percentage along with 34.8 yards on the ground. He ranks as the QB28 during that time frame, making him simply a streaming option for fantasy at this point in his young career. Fields will have a very tough matchup on Monday Night, as the Steelers are the seventh-best defense against opposing quarterbacks through Week 8 (depending on scoring format). He will also have to keep an eye out for Pittsburgh’s pass rush, as they have had plenty of success getting pressure on quarterbacks while the Bears’ offensive line has struggled to protect Fields this year (Chicago leads the league in sacks allowed with 30). Keep Fields on your bench/waiver wire this week.

On the other end of the age spectrum, Ben Roethlisberger has been in the NFL for a very long time. In fact, Roethlisberger has been in the league since Fields was five and a half years old; taking snaps for the Steelers for over 75% of Fields’ entire life. That experience will help Roethlisberger on Monday Night, but with that maturity also comes wear and tear, which he has also shown in 2021. Roethlisberger is on pace for his lowest touchdown total since 2010 (excluding 2019 where he was injured after two games) and has only thrown for 300+ yards in one game this season, something he has done 13 times in the past three seasons. He will look to get back on track against a Chicago secondary that has given up three straight QB9 or better finishes in the past three games. Roethlisberger’s best days as a fantasy option may be behind him, but he is a fine streaming option for Monday Night.

As the first running back off the board in the 2021 NFL Draft, a lot of expectations were placed on the young shoulders of Najee Harris. He would be looked on to aid Pittsburgh’s offense as it adjusted under their aging quarterback and would also need to help prepare for the post-Roethlisberger era. So far in 2021, Harris has played very well. He is currently ranked as the RB5 (in 0.5 PPR scoring formats) with 165 total touches for 752 total scrimmage yards and five touchdowns. He has been especially great in the passing game, gaining 273 yards and two touchdowns through the air in his first seven games. Harris will have a tough test on Monday Night as the Bears have allowed the eleventh-fewest receiving yards to running backs this season (an average of 33 yards per game). He will need to make the most of his touches, both rushing and receiving, but with his talent and role in the offense is still a solid RB1 option this week.

David Montgomery had an amazing start to the 2021 season, ranking as the RB10 (in 0.5 PPR scoring formats) through Week 4 with multiple 100-yard games. He looked like a golden ticket for any managers who grabbed him in the middle of their drafts. Unfortunately, a knee injury has kept him off the field since Week 4 and the Bears offense has not been the same. Though, in his absence, another Bears’ running back has emerged in Khalil Herbert. Herbert had two outstanding games in Weeks 6 and 7, gaining over 100 yards from scrimmage and finishing as the RB9 and RB11 respectively in those weeks. With Montgomery coming back to practice this week, it will be interesting to see how Chicago manages their backfield going forward and how much playing time they will see each week. Montgomery’s status for Monday Night is still questionable, it is unclear if Herbert will still see a majority of the carries or if Montgomery will get back his share of the rushes this week. Nevertheless, they will have a tough matchup against Pittsburgh, who has kept most opposing running backs in check all season. Herbert is an RB3/Flex option this week who will have a higher upside if Montgomery is out but both backs should be avoided if possible on Monday Night.

One of the biggest fantasy disappointments so far this season has to be Allen Robinson. He has been able to produce in recent years, almost in spite of his mediocre quarterbacks, but Robinson has not been reliable at all in 2021. He currently ranks as the WR63 (in 0.5 PPR scoring formats) and has yet to have a finish better than WR45 at any point this season. In fact, the only Bears wide receiver who has been remotely startable is Darnell Mooney, a second-year player from Tulane. Mooney leads Chicago in all receiving statistics but still only ranks as the WR43. They will look to make an impact on Monday Night and will have a great matchup to do so. Pittsburgh has allowed the eighth-most fantasy points to opposing wide receivers through Week 8 and maybe without one of their best players in their secondary in Minkah Fitzpatrick. While both guys have been a letdown for the first half of the season, look for Robinson and Mooney to have solid games on Monday Night and be Flex-worthy this week.

Pittsburgh has been one of the best teams in terms of finding wide receiver talent through the NFL Draft. Whether they select guys early in the draft like JuJu Smith-Schuster and Chase Claypool or grab players late like Antonio Brown or Diontae Johnson, it seems like every wideout that the Steelers pick becomes a solid player who contributes on game day. This season they have been led by Johnson and Claypool, with the former ranked as the WR24 through Week 8. Claypool has regressed after an amazing rookie season but has still been serviceable as a WR3/Flex option, especially in the right matchup. They will both be in for a great opportunity on Monday Night as the Bears have allowed the second-most fantasy points to opposing wide receivers this season, including three top-eight wide receiver finishes in their past two games. Look for Johnson and Claypool to have big games on Monday Night.

This game will feature two young tight ends who are still working to establish themselves fully in their offenses. Pittsburgh’s rookie tight end Pat Freiermuth has played well in his first seven games, increasing his snap count and role in the offense each week. Over the past two games, Freiermuth has eleven receptions on 14 targets for 102 yards and one touchdown, showing what made him a high-level prospect in last year’s draft. For Chicago, Cole Kmet has improved on his numbers from his rookie season; nearly matching his reception and receiving yard totals from all of last year in just eight games in 2021. He still has a way to go as a weekly fantasy option but he has shown he can shine in the right matchup. Both guys will have tough matchups this week as the Bears and Steelers have been stout against opposing tight ends this season, allowing just 28.1 and 47.7 yards on average to the position through Week 8. Despite some recent performances for Freiermuth and Kmet, both guys should be left on the bench/waiver wire for Monday Night.

When many people think of the Bears and Steelers, one of the first things that come to mind is elite defense. Pittsburgh and Chicago have been known for having some of the best defenses throughout NFL history and have kept up with that trend in recent years. One of these teams has had a D/ST that finished inside the top two over the past three seasons and have been great options to play this season as well. The Steelers have been great in terms of points allowed (they rank eighth in the league with 20.3 average points allowed) and sacks/quarterback pressure (they have 19 sacks in their seven games and have pressured quarterbacks on 28.6% of their dropbacks in that timeframe), while the Bears have been advantageous with turnovers (eight so far this season) while also getting after opposing signal-callers (21 sacks so far this season). Chicago will have two of their better players out on Monday Night in Khalil Mack and Eddie Jackson so Pittsburgh is the better D/ST to play this week but the Bears D/ST is still a solid option for Monday Night.

The Steelers will look to get their two-game homestand off on the right foot with a victory on Monday Night. The Bears have talent across their roster but have looked disjointed at times in 2021, thanks in part to changes under center and some questionable coaching decisions by Matt Nagy and staff. When functioning at their full capacity, Chicago has shown they can be a very good team but have yet to put it together this season, and they will have to deal with some major injuries this week and going forward. Pittsburgh, who has had their own strife to deal with so far in 2021, is still the better team at this point and will come away victorious on Monday Night by a score of 24-16.