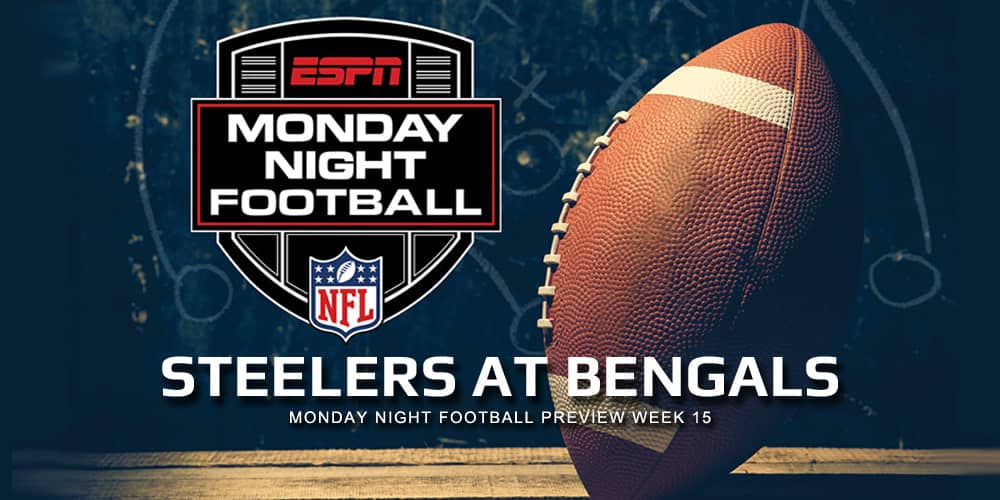 On the heels of a great Monday night AFC North contest last week, Week 15 will spotlight the other half of the division as Pittsburgh takes on Cincinnati. Chances are this matchup will not be as dramatic and miraculous as last week due to the current status of the Bengals, but there will still be plenty of action to take in on Monday night. The Steelers, currently on a two-game skid after previously being 11-0, will look to regain their composure before the playoffs as the Bengals will continue their rebuilding efforts towards a brighter future.

For this Monday night matchup, we have one of the highest spreads of the week with Pittsburgh being favored by over two touchdowns and one of the lowest over/under lines at 40 total points. Vegas sees this game as a decisive Steelers victory with a minimal Bengals resistance, and you could imagine why they see it that way. Cincinnati has not met a 40 point over/under line since Week 10 and they have looked like one of the worst teams in the NFL in recent weeks. While a spread of 14.5 is a lot to cover, Pittsburgh should have little issues leaping over that hurdle while also keeping the score low. Bet the Steelers and the under for Monday night.

Since the gruesome injury to Cincinnati’s new golden boy Joe Burrow in Week 11, the Bengals have had extremely rough play behind center. Brandon Allen and Ryan Finley have tried to man the fort to the best of their abilities, but have failed to produce more than 220 passing yards or multiple touchdowns in any contest from Weeks 12-14. That will not change against Pittsburgh on Monday night, especially since they are among the best defenses in the NFL (second-best against fantasy quarterbacks so far this season depending on scoring format). The Steelers defense will likely have a field day against Finley, who is slotted to start due to Allen’s knee injury, and should not be started in fantasy under any circumstance.

Ben Roethlisberger will be making his 18th appearance at Paul Brown Stadium on Monday night. It is a place he is familiar with, as he is fourth on the list in quarterback position and is highest on said list of players who have not played for the Bengals. It is also a stadium he is very comfortable playing in, averaging over 274 passing yards and one touchdown on a 65% completion rate in his last ten games there. Roethlisberger had an exceptional game in their Week 10 matchup, finishing as the QB3 (depending on scoring format) and will look to do the same on Monday night. While Cincinnati’s secondary has cracked down in their last four games, allowing an average weekly finish of QB23, Roethlisberger has what it takes to break that streak and have another QB1 level performance on Monday night.

Both the Bengals and Steelers have had issues running the ball in recent week, averaging under 63 rushing yards per game in their last four games. This has trickled down to the fantasy production of their running backs, as neither team has produced a top 16 weekly finish since Week 11. Both teams will look to get the ground game going on Monday night.

James Conner had an amazing start to the 2020 season, ranking as the RB9 in Weeks 2-8 in PPR scoring formats but has since fallen from grace in the second half of the season. He did miss Week 12 and 13 due to a positive COVID-19 test but he disappointed many in his Week 14 return with only ten rushes for 18 yards on 23 offensive snaps. When he was off the field, the Steelers used a combination of Benny Snell Jr. and Anthony McFarland Jr., who together combined for 89 rushing yards in Weeks 12-13. Even when Conner came back in Week 14, Snell and Jaylen Samuel cut into his carry count and there is no indication that will change Monday night with Conner less than 100% healthy. This group should have room to run on Monday night as Cincinnati has allowed a top 20 running back weekly finish in each of their last four games, including two top-ten finishes in Weeks 11 and 12. Despite the pain his fantasy owners may feel, Conner is worth another start this week. Expect RB2 numbers from him on Monday night. The other Steelers backs should be left on your bench/waiver wire this week.

Much like their quarterback situation, the Bengals have had immense trouble with their running back situation since losing their star Joe Mixon in Week 7. The only one who has remained relatively fantasy relevant is Giovani Bernard, who ranks as the RB22 in PPR scoring formats since Week 7 but he has tapered off in a major way in recent games. Since Week 10, Bernard has yet to score a touchdown or gain more than 55 total yards in any game, especially last week when he was pulled after a first-drive fumble. After Bernard’s benching, the Bengals relied on Samaje Perine and Trayveon Williams to little success. This group will try to make an impact against a Steelers defense that is second-best on the season against fantasy running backs (depending on scoring format). Keep Bernard, Perine, and Willaims on your bench/waiver wire this week.

After two straight zero-point performances, A.J. Green erupted with six receptions on seven targets for 62 yards and one touchdown. Games such as this are what fantasy owners have expected from Green over his historic career, but he has been completely unreliable this season to start regularly. There have been many games where he has scored less than six fantasy points (in PPR scoring formats), including four zero-point performances. In fact, Green leads the league in games where he started the game, recorded at least one target but finished with zero fantasy points. With Green being so inconsistent, Tyler Boyd and Tee Higgins have tried their best to fill the void. Boyd has solid this year, ranking as the WR17 so far this season and Higgins has shined in certain matchups, ranking as the WR12 for Weeks 6-10. They will try to help Finley stay afloat on Monday night but it will be interesting to see how his performance will impact Boyd, Higgins, and Green. If he can’t stay upright and is facing constant pressure, it is only plausible that his wide receivers will take a major dip on Monday night. Based on their target share, Boyd and Higgins will still have a safe enough floor to start this week as WR2/Flex options. Green, however, is just too risky to start and should remain on your bench this week.

Just like seemingly every year, Pittsburgh has continued to find amazing wide receiver options both on the field and in fantasy. The Steelers have three wide receivers ranked in the top 25 (in PPR scoring formats), the most by any team. JuJu Smith-Schuster, Chase Claypool, and Diontae Johnson have been very dependable options for fantasy in 2020 and will keep that trend going on Monday night. The Steelers are one of the most pass-happy offenses in the league and have exceeded that mark recently. Since Week 11, they have attempted 47 passes per game, giving plenty of work to the multi-talented skill-position weapons this team has. Feel confident in starting Smith-Schuster, Claypool, and Johnson this week.

In their last Monday night contest, Eric Ebron made headlines regarding a topic many dread but he himself is very familiar with: dropping the football. Ebron had two key drops in Pittsburgh’s game against Washington, moving him into a tie for third-most in the league this season with seven. He, along with teammate Diontae Johnson, have been plagued with this condition all season but have found ways to maintain fantasy relevance (Ebron is ranked as the RB9 in PPR leagues). He will have a bounce-back opportunity against Cincinnati, who is ranked as the fourth worst defense against fantasy tight ends (depending on scoring) and have allowed two top-five performances to the position in the last four weeks. Start Ebron on Monday night.

The Steelers D/ST is the top unit in a vast majority of leagues and will have no issues posting another elite score on Monday night. The Bengals offense has been putrid since Burrow’s exit, only scoring in double-digits in one game since Week 12 and are averaging three sacks and turnovers in that timespan. If you have the fortunate opportunity of starting Pittsburgh’s D/ST this week, you have to do it. Expect big numbers from this unit on Monday night.

While this matchup would have been much more marquee if Burrow was healthy, this game still has a lot to watch for on Monday night. If the Bengals want to keep this game close, let alone try to find a way to win, they will need to limit their turnovers. Cincinnati has had multiple turnovers in each of their last five games and will need to play their cleanest game of the year to have a chance Monday night. But, even if they play their best, in their current state I don’t think the Bengals will have what it takes to win on Monday night. I see this game going to Pittsburgh 31-6.