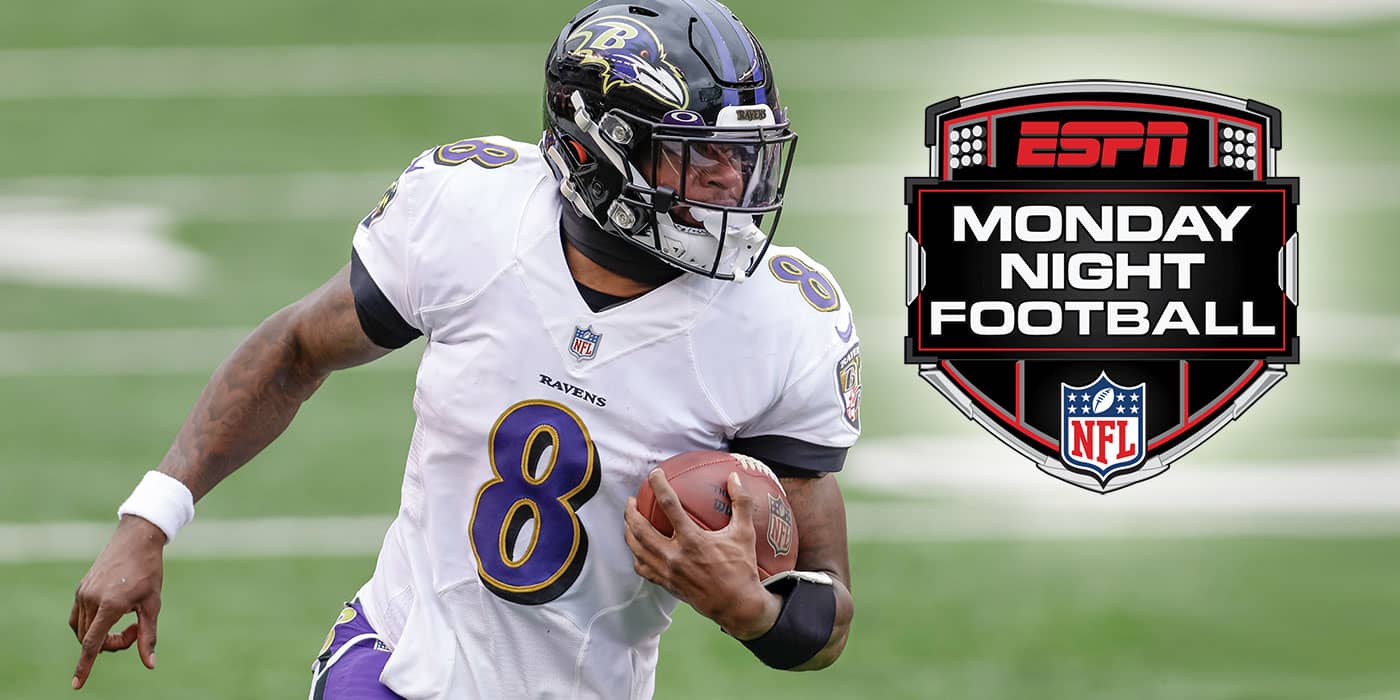 Las Vegas’s Allegiant Stadium is where Monday Night Football will kick off in 2021. It is one of the newest stadiums in the NFL but it already has some history to it. In their inaugural game on Monday, September 21st, 2020, the Las Vegas Raiders and New Orleans Saints played on the 50th anniversary of the MNF program; marking the impact that Monday Night Football has had not only on fantasy football community but on the NFL at large. Allegiant Stadium will play host as Las Vegas welcomes the Baltimore Ravens to town this week.

The Ravens will be a road favorite, favored by four points against the hometown Raiders. Last season Baltimore covered the spread in eight of the games they were favored in with only one game being less than four points. The Ravens were able to take care of business from a gambling perspective and should have little trouble continuing that trend on Monday Night. Take Baltimore and the points this week.

50.5 points as the Over/Under line is one of the highest in Week 1. It is only one of four games to have a line higher than 50, so it is easy to say Vegas sees this game as a high-scoring affair. When looking at how the Ravens faired against the spread last year, they had a hard time going over in a majority of their games last year, especially in games with the line over 47 points (two games over and five games under in those circumstances). With Baltimore’s improved offense and Las Vegas’s offensive ability this game will be close to the line but will ultimately finish just Under on Monday Night.

After an MVP campaign in 2019, Lamar Jackson took a step back last season. He still finished as the QB10 last season (depending on scoring format), but his numbers were disappointing to many fantasy managers who relied on him last season. There were many factors that led to this regression, such as injuries and inconsistent play among his wide receiver corps along with Baltimore’s backfield struggling to find stability. But, this is a new year for Jackson and the Ravens; another chance for them to find postseason success and for fantasy managers to put their hopes in the elite quarterback. Based on what has been reported from Baltimore, outside of their consistent injuries, there are reasons to be optimistic about Jackson in 2021. He appears to be slinging the ball around with accuracy and looks prime for a bounce-back performance in 2021.

His first opportunity to show us all what he has is Monday night against Las Vegas, and this matchup is a great one for Jackson. The Raiders finished last year as the 25th ranked passing defense, allowing over 260 passing yards and just under two touchdowns per game. With his arm talent and his ability to use his legs to make big plays look for Jackson to be a top ten quarterback for Week 1 on Monday Night.

On the other side of the field is a signal-caller who actually improved his numbers after a few down seasons. Derek Carr finished last season as the QB13 (depending on scoring format) with 4103 passing yards and 27 touchdowns, both numbers being his best since 2015. Carr was a very successful streaming option last season in certain matchups, but many managers have wondered this offseason if he will be worth relying on each week. Though the Raiders lost one of their better receivers in Nelson Agholor, Carr still has multiple weapons at his disposal. He will face a fierce test on Monday Night, however, as the Ravens were one of the best passing defenses last season and still look like a tough matchup for him (even with the recent loss of Marcus Peters). Carr is a worthy streaming option in 2021 with plenty of upside, but not on Monday Night.

Before last month many fantasy managers had not heard of Ty’Son Williams, the former BYU running back who went undrafted in 2020. But, over the past few weeks, Williams has become a hot commodity on waiver wires and in trades throughout fantasy football. Due to major injuries to JK Dobbins, Gus Edwards, and Justice Hill, Williams will be making his NFL debut as the main running back in Baltimore going into Monday night. He will have a delightful matchup to get his career rolling facing Las Vegas, who finished 2020 as the 28th best defense against running backs in the league. While his role past Week 1 is uncertain as the Ravens have brought in multiple veteran backs to fill the void in their backfield (such as Latavious Murray, Le’Veon Bell, and Trenton Cannon), Williams will have a chance to feast on Monday Night. Feel confident in starting him this week.

The Raiders made multiple interesting decisions this offseason but one that especially stuck out to fantasy managers was the signing of Kenyon Drake back in March. Las Vegas’ backfield had mainly been a one-man show over the past two seasons. Josh Jacobs, their former first-round pick in 2019, had seen an average of 51% of all running back snaps since his rookie season but there is plenty of doubt that number will be matched in 2021 with the addition of Drake. Since it is Week 1 it is hard to say what their workload balance will be this year. Drake may simply be a passing down back who will help Carr take advantage of a new weapon that is dangerous in open space. Or Drake could command more of an equal share on all passing plays, putting them in a committee that will diminish both of their values in fantasy. Not to mention Jacobs is nursing a toe injury that has kept him to limited practice this past week. For Monday Night, the Raiders’ coaching staff will likely see what both backs have to offer and diversify their game plan. Both Jacobs and Drake are talented enough to start and will be solid options on Monday Night. Look for Jacobs to be an RB2 with upside and for Drake to be a high-end Flex this week.

Henry Ruggs will look to lead a rather young Las Vegas receiving corps in 2021. All of their top three wide receivers are under the age of 26 with Ruggs and Bryan Edwards both being 22 years old. While Carr’s targets may be young, there is plenty of talent for him to throw it to, especially when it comes to Ruggs’ and Edwards. Both players will have a formidable matchup as the Ravens had one of the best secondaries last season and locked up wide receivers regularly (ranked as the third-best defense against wide receivers in 2020). Though they will be missing Peters, look for Baltimore to keep Las Vegas’s wide receivers contained and leave them with low-end Flex upside at best on Monday Night.

When he was a top-four selection back in 2014, many thought Sammy Watkins had the makings of a great wide receiver who would dominate the NFL for years to come. To say his career has been disappointing would be an understatement. Now, that is not to say Watkins has not shined in moments throughout his time in the NFL, including his 1000 yard season in 2015, his three touchdown explosion on Week 1 of 2019, and hoisting the Lombardi Trophy later that season. But, Watkins is now on his third team in the last five seasons and will need to find his spark again if he wants to stay a featured wide receiver in the league. He certainly has the chance to do so as a member of the Ravens, who themselves were in need of weapons at this position. Watkins along with the young Marquise Brown will be the top two wideouts for Baltimore and will look to make a statement on Monday Night. They will have a great chance as they take on a Raiders’ secondary that was torched often last season (Las Vegas allowed at least one WR18 finish or better in ten of their sixteen games in 2020). The state of Baltimore’s passing game is still a bit cloudy, but look for Watkins and Brown to be solid Flex options in Week 1 on MNF.

Both tight ends in this matchup are among the best-of-the-best when it comes to fantasy football. Darren Waller lept onto the scene last year and finished as the TE2 (in 0.5 PPR formats) and will be a strong candidate to finish there or even better in 2021. Mark Andrews finished as the TE5 and had more of a boom-or-bust season himself. He was very inconsistent, but when he hit, Andrews was one of the best tight ends of the week. Look for both to be solid options on Monday Night Football.

The only D/ST worth starting in this matchup is Baltimore. Their unit was one of the best in 2020 and should continue to wreak havoc on opposing offenses, especially on Monday night. The Ravens’ passing defense will look to continue their pressuring ways and match their 12.9% QB Knockdown rate and 39 sacks from last season. Baltimore is a must-start D/ST in Week 1 while Las Vegas should remain on your bench/waiver wire.

This matchup will be an intriguing one and a great start to the Monday Night schedule. With the power of Baltimore’s team matching up with a young Las Vegas roster surrounded by a loud Raider Nation, this has the making of a great contest. The Raiders still have a ways to go in their rebuild before they can be in the same tier as the Ravens but their offense will do enough to keep things close, but not enough to put them over the top. I have this one going to Baltimore by a score of 28-17.