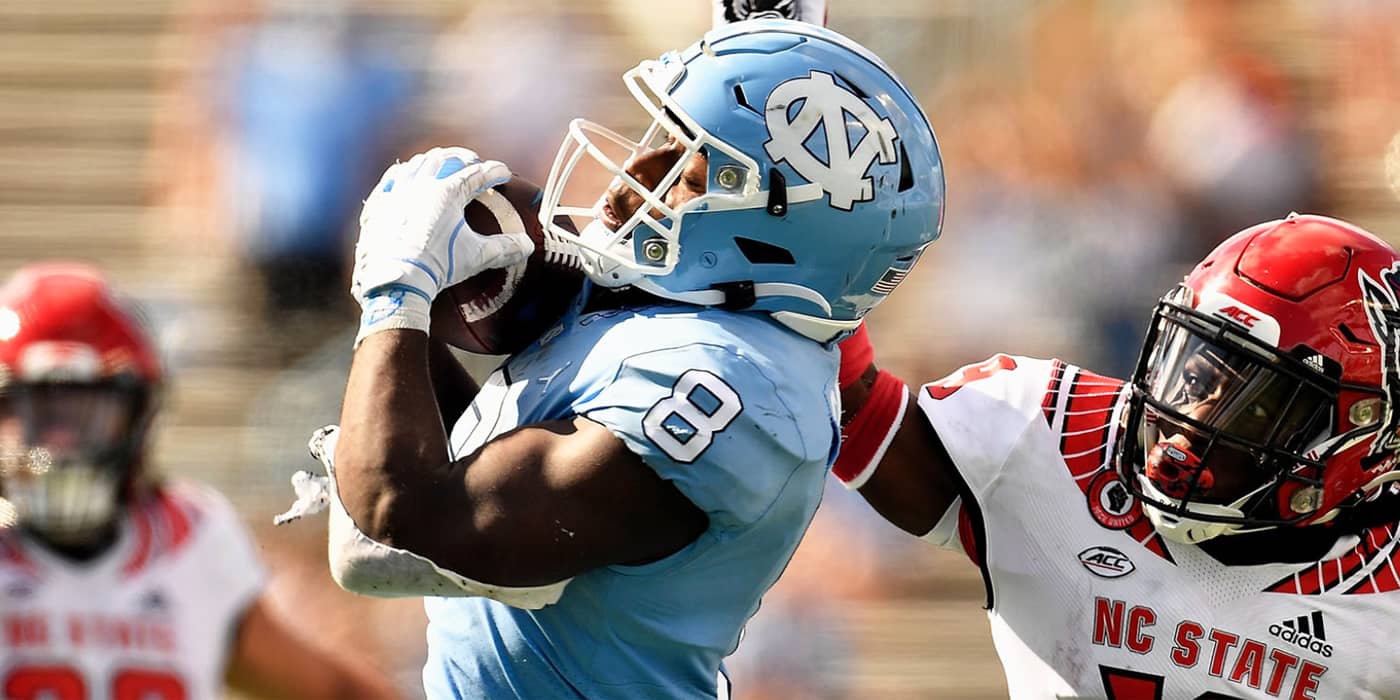 Michael Carter may have been overshadowed by Javonte Williams in his senior year at UNC, but that doesn’t mean he should be overlooked in upcoming dynasty drafts. If you watch highlights of Michael Carter, you’re missing the versatility that makes him such a valuable NFL prospect. He can be used in every facet of an offense and on special teams. Over four years on campus, he has amassed over 4000 yards from scrimmage and an additional 650 yards in the return game.

Carter arrived at UNC as a three-star prospect, according to 247sports.com, and promptly delivered a nine touchdown season on eleven games in which he split time as complimentary back. During the 2018 & 2019 seasons, the Tarheels went 9 – 15, yet Carter continued to improve, and the tandem with Javonte Williams began to take shape. For the past two seasons, Carter and Willaims have had similar usage, with Carter having 15 more touches in 2019 and Wiliams tallying one more tote in 2020. The duo put an exclamation point on their careers in 2020 as they each rushed for over 1100 and had double-digit trips to the endzone.

Despite being only 199 pounds, Carter runs with nice power. He rarely gets stood up by a single defender and typically falls forward for those last precious yards. He churns his feet and can move a pile, as displayed on his touchdown run during the Reese’s Senior Bowl. There he looked like the best rusher on the field for either team. Carter is excellent at reading the outside zone-blocking scheme, seeing the hole, and making a single cut to get into the second level of the defense. He gets skinny through the hole and runs through arm tackles. At the second level, he can read and set up blocks that can spring a big run. Carter doesn’t make highlight-reel jukes or spins regularly, yet he consistently makes subtle and nuanced moves to make defenders miss. He can string these moves together nicely and shows an agile change of direction.

Throughout his four years at Chapel Hill, Carter also showed some chops in the receiving game. Carter didn’t show elite pass-catching ability, but he showed enough quality catches for it to be a positive in his game. He averaged 20 receptions a year and finished off his senior year with 25 catches for 267 yards and two scores. As a pass-blocker, he sets up nicely to get in the way of defenders and slow them down. Although he is susceptible to bull rushes by larger defenders, he typically provides enough time for his quarterback to be able to make a throw.

For as good as Carter can be at the second level, he shows a lack of creativity when he’s met in the backfield. Too often, he goes down by the first defender behind the line. At times, he misreads his initial lane and runs into his lineman’s rear. There are also times when Carter misses an opportunity to break a big run due to a weak swipe at his ankles bringing him down. I wouldn’t be surprised if he gets knocked for a slower than expected 40-time, worse than 4.5 seconds. He more than makes up for this in burst and explosiveness, though. Carter could use to put on a few more pounds for his NFL debut; however, his small frame doesn’t provide much room for added muscle.

Too many people are writing Michael Carter off as a third-down back only. This could be a mistake depending on which team takes him during the NFL Draft. Carter’s ability to break big runs should transfer to the NFL, especially if he lands with a strong zone-blocking offense. His fantasy floor will be his work in the passing game, but his inside running is good enough to be used on early downs and near the goal line. If given the opportunity, he has the tools to be effective as a workhorse, although the stars would need to align for that opportunity to present itself.

Carter is currently a value in rookie drafts with an average draft position (ADP) at the second/third round turn. Depending on where Carter gets picked in the NFL draft will greatly impact his value. Even if he is drafted to a “perfect” situation, it is unlikely he jumps to the back of the first round. This would maintain his value in your rookie drafts as Carter’s floor is a change-of-pace option with plenty of big-play upside. His versatility in the return game and developing skills in the passing game will keep him relevant regarding what happens in April.

Final thought – Michael Carter may be slightly undersized and overshadowed by his UNC teammate, yet he has the ability to be the diamond in the rough of this draft. Don’t let Carter slip past you in your fantasy drafts.

Follow me @FFTheAtHomeDad  for more rookie profiles and so much more.