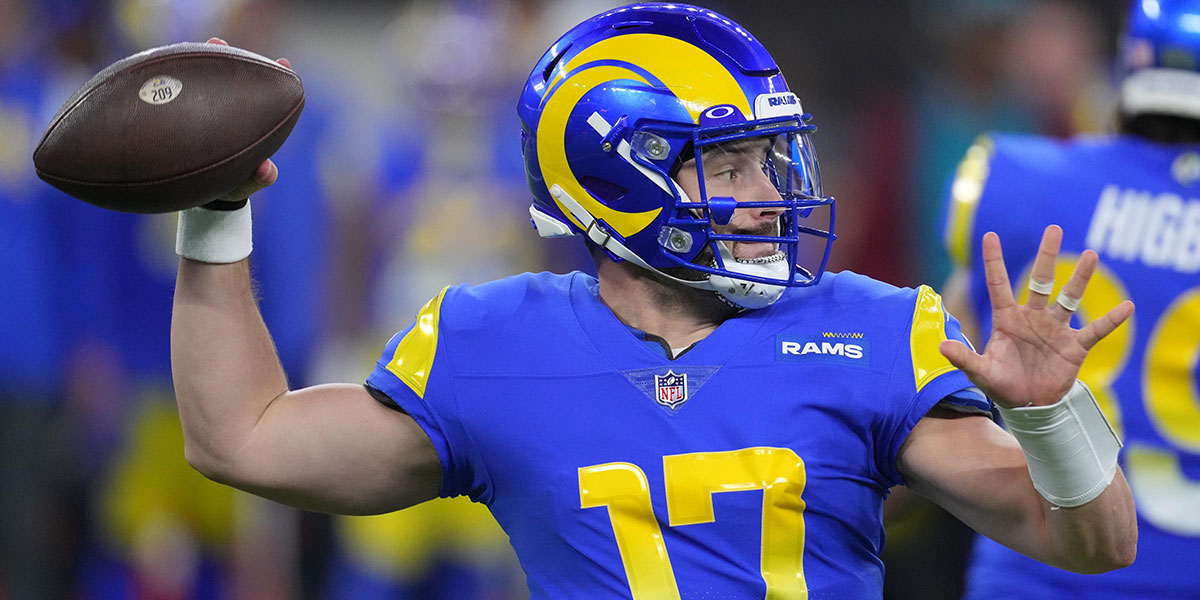 Well, that game was just a kick in the pants. It was a hard game to enjoy after watching all the injuries.

Before we get started, my stats last week, I went 1-3: Kyler Murray’s rushing yards and Rhamondre Stevenson’s first and anytime touchdown derailed by unfortunate injuries. I missed Hunter Henry as he went over 30.5 receiving yards (in the first half) and was correct on Nelson Agholor’s receiving yards.

Let’s do whatever mojo we need to do to have this game injury free. And now it’s time to get our props on.

What kind of prop bets would this be if Mayfield was not included?

In their last three games, the Rams’ quarterbacks have attempted the following:

I know they are not Mayfield, and Sean McVay was working with what he had. But Mayfield only played one game in those three weeks, which was Week 11 against the Baltimore Ravens (while he was a Carolina Panther).

In that game, he attempted 33 passes.

For the season, the Rams averaged 33.6 passing attempts per game. In their last three weeks, that number dropped to 28.3

Now that McVay has Mayfield, it appears the number will be closer to the season average than the three-week quarterback carousel sample size.

I bet over Mayfield’s 30.5 passing attempts.

In his last three games, Watson has 48, 110, and 48 receiving yards. He is averaging 16.04 yards per reception and 40.1 yards per game (remember he had a stretch of four consecutive games earlier in the year where he didn’t get more than 15 receiving yards, bringing down the average).

The Rams’ defense has allowed the 11th most passing yards per game (228.6), while the Packers are averaging 220.2 passing yards and 31.7 passing attempts per game.

The Packers are 31st in field goal attempts with 18 ( in comparison, the Indianapolis Colts are first with 35).

And Week 6, v New York Jets had two field goal attempts and made one and one extra point.

Bet under Crosby  1.5 field goals made.