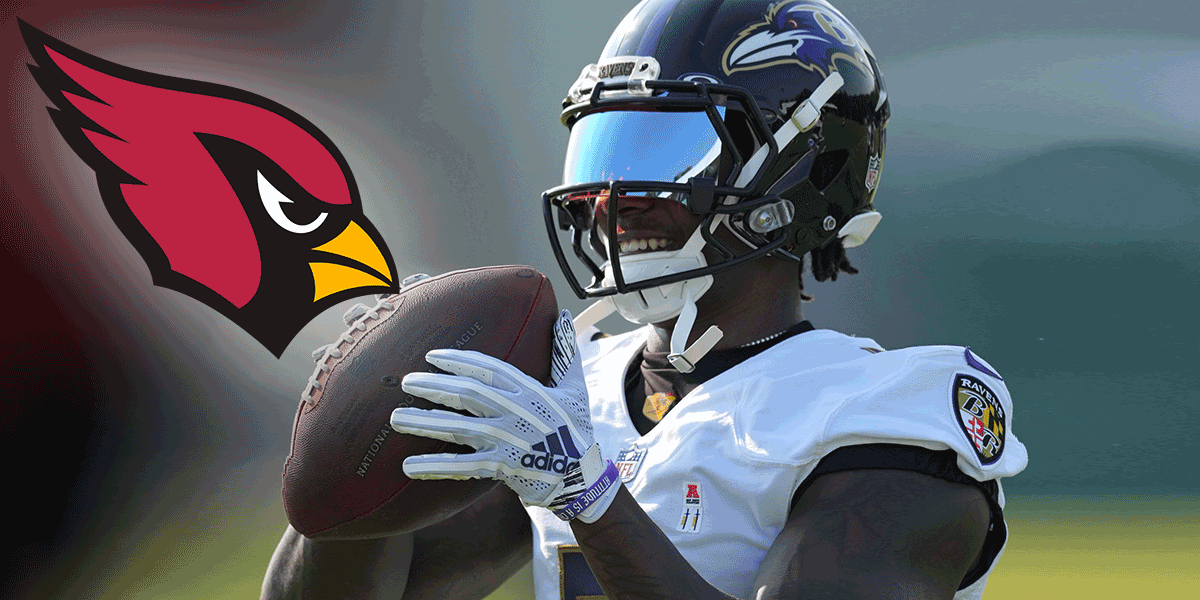 In one of the wildest draft nights in recent memory, Ravens star WR Marquise Brown was traded to the Cardinals along with a third-round pick (#100) for a first-round pick (#23), per NFL Network’s Ian Rapoport. Then, just a few days later,  Cardinals veteran star WR DeAndre Hopkins was suspended six games for violating the NFL’s PED policy, per ESPN’s Adam Schefter.

It seems like Brown is moving from a run-heavy team to a pass-heavy team while keeping his WR1 role until Hopkins eventually returns in Week 7. So, what are the expectations for Marquise Brown heading into the 2022 NFL season? In this article, I will outline how the trade to Arizona and subsequent suspension of DeAndre Hopkins may ignite Marquise Brown’s breakout in 2022 fantasy football.

After Marquise Brown’s impressive sophomore season, where he had a 24.7% target share and 10.3 half-PPR PPG, he then started his third year off hot. By the end of the 2021 season, he’d finished as the half-PPR WR23. However, prior to Lamar Jackson’s injury in Week 14, Marquise Brown was truly coming into his own.

Despite a constant 26% team target share all season, the difference in Brown’s efficiency and overall production in his games with Lamar vs. Huntley are night and day.

For some added context, while Brown played with Lamar between Weeks 1-13, he was the WR13 in half–PPR PPG (13.8ppg) and was right behind elite names such as:

Clearly, Marquise Brown’s talent is indisputable. Now, before making projections for 2022, we must account for DeAndre Hopkins’ recent suspension.

Throughout Hopkins’ career prior to 2021, he had only missed 2 of 128 games. Then, in 2021, he missed 7 games with hamstring and knee injuries. Now, he’s been suspended six games in 2022 for violating the NFL’s PED policy. So, how were targets distributed in Arizona throughout the 2021 season with vs. without Hopkins? 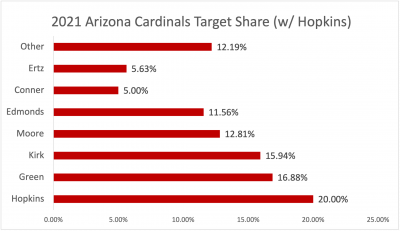 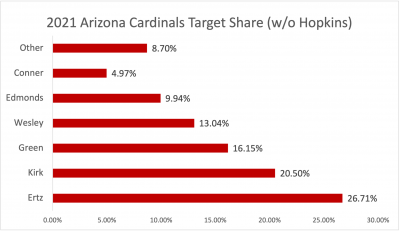 As you can tell, prior to Hopkins’ injury, targets were distributed relatively evenly among the team’s top receiving options. However, Arizona did not have the depth needed to withstand an injury to their star receiver. In his 4 games played without Hopkins, Kyler directed over 75% of his targets towards an aging Zach Ertz, Christian Kirk, A.J. Green, and UDFA Antoine Wesley who had 8 career receptions prior to that stretch.

With the recent suspension of DeAndre Hopkins, Marquise Brown should immediately step into this Cardinals offense and command 25% of the team’s targets. Throughout the first six weeks of the 2022 NFL season, I’d project the entire team’s target share to look similar to the graph below: 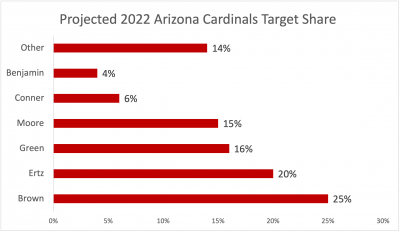 Especially now that Christian Kirk has left for Jacksonville, while Hopkins serves his six-game suspension, Brown will have no problem maintaining his typical 25% target share.

When Hopkins eventually returns in Week 7, Brown’s target share may drop, but only by about 2-3%. I expect the return from suspension to have the biggest effect on TE Zach Ertz, whose targets jumped from 5.4 per game to 10.75 per game following Hopkins’ injury in 2021. Overall, once Hopkins returns from suspension, I’d project the team’s target share to look somewhat like: 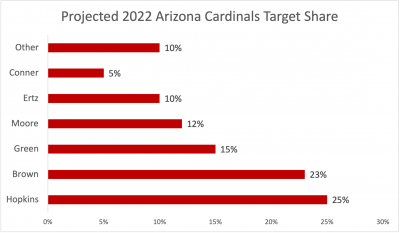 No matter if he’s playing alongside DeAndre Hopkins or not, I expect Marquise Brown’s talent to earn him ~25% of the Cardinals’ target share throughout the 2022 season. So, how do these incoming targets from Kyler Murray compare to Brown’s previous targets, coming from Lamar Jackson?

Overall, there are very few differences between the two QBs. Both are quick, scrambling QBs who put up nearly the same stats while healthy in 2021. Therefore, a star receiver like Marquise Brown moving from Lamar Jackson to Kyler Murray should earn similar production to what he saw last season. In fact, his efficiency on those targets may even increase due to this situation change.

Furthermore, Brown already has some previous rapport with his new QB, Kyler Murray, as they played their junior seasons together at Oklahoma in 2018. That season was also played alongside then-sophomore WR CeeDee Lamb, who’s now a star receiver for the Dallas Cowboys.

Once Kyler and Brown left for the 2019 NFL Draft, CeeDee took over the air game:

Clearly, in a Kyler Murray-led offense, Marquise Brown is capable of commanding meaningful targets alongside other notable receivers such as CeeDee Lamb. Therefore, I expect Brown to continue his success throughout the entire season, even while playing alongside DeAndre Hopkins after his suspension.

Expectations For Marquise Brown In 2022

In Arizona, I expect Marquise Brown to maintain his 25% team target share, as he’s done in his previous two seasons. This target share would project him between 140-150 targets on the season, which is around 8-9 per game. Through the first 13 weeks of 2021, Brown was able to turn his 9 targets per game into 13.8 half–PPR PPG, so it’s not unreasonable to project him between 14-15 PPG in his new offense, especially without Hopkins. After he returns from suspension, a projection between 13-14 PPG may be more realistic. Either way, I expect Marquise Brown to easily finish within the top-15 WRs in 2022.

According to Fantasy Football Calculator, Marquise Brown is currently ranked as the WR31, behind Claypool, Jeudy, and Renfrow. I’d draft Brown ahead of all of those names, and would also have no issues drafting Brown ahead of DeVonta Smith, Thielen, or even McLaurin, which would put him around WR22 in my ranks.