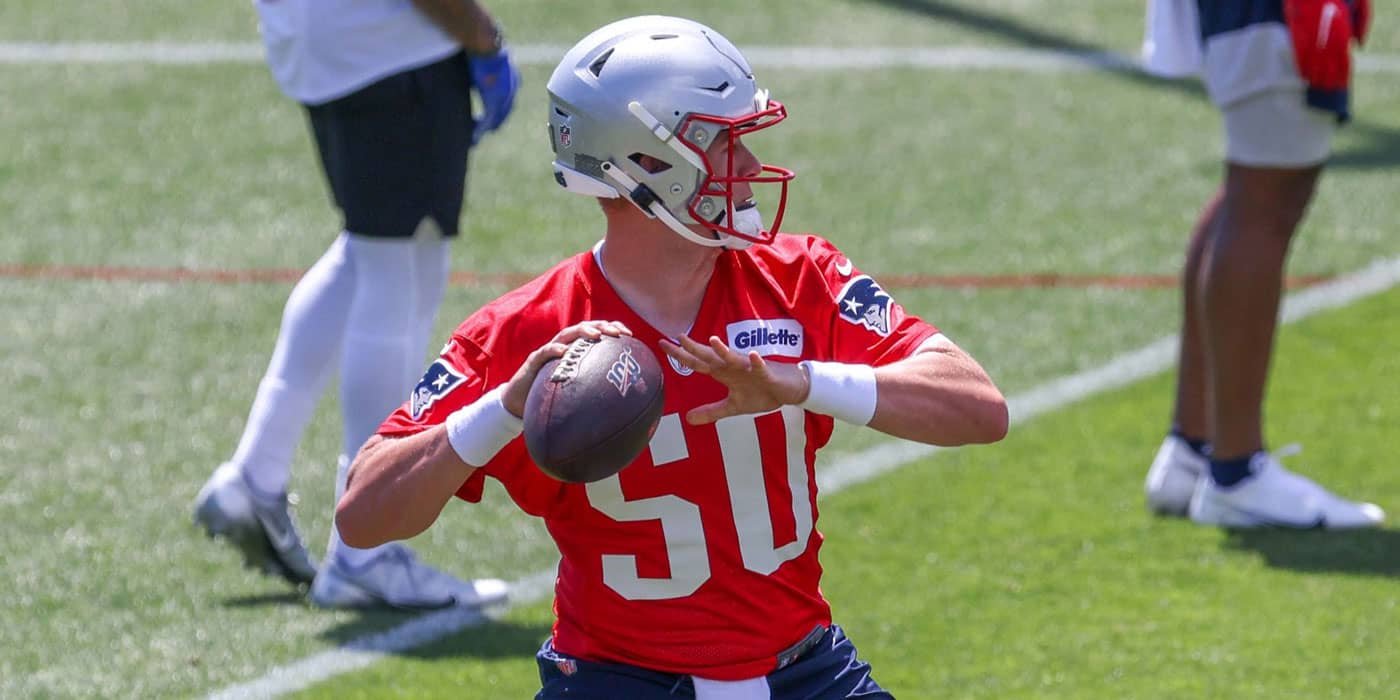 Welcome to the new era of the New England Patriots. The perennial powerhouse drafted the heir to the quarterback throne with the 15th overall pick by selecting former National Championship winner Mac Jones out of Alabama. Obviously, we all know Cam Newton is still on the roster and is projected to be the starter so far this offseason, but Jones is very clearly the future of this franchise. In fact, this is the first time the Patriots have drafted a quarterback in the first round since Drew Bledsoe all the way back in 1993. They lucked out by finding the greatest diamond in the rough of all time with Tom Brady in round six, but in today’s NFL, it’s a lot harder to find a franchise quarterback outside of the first round. Jones is a polarizing prospect as many believe he is overrated and his numbers are inflated by the talent around him, but there are the Mac Jones stans out there that see a future star in the making. Remember, this guy was the best quarterback in the nation for a reason. All of those weapons can’t throw the ball to themselves.

Jones was a popular pick to go #3 overall to the San Francisco 49ers until they shocked the world and drafted Trey Lance. Truthfully, the fit wasn’t as good in that offense as it is in New England’s offense. Jones is one of the best passers, in this draft, at throwing receivers open and making the all elusive anticipatory throws. Most quarterbacks are throwing to where the receiver currently is, but not Jones. He has very good route awareness and will throw a dot to where the route is supposed to end. He also has good pocket movement and is able to get out of trouble by shimmying around incoming rushers. While Jones isn’t considered a scrambling quarterback, he does have the ability to make plays happen with his legs as he is able to move outside of the pocket and still throw dimes to his receivers. His football IQ is developed beyond his years and he is able to make plays that some quarterbacks are never able to do for their entire career. Obviously, we know that Bill Belichick loves quarterbacks with a high football IQ. Now, this isn’t me saying he has the best football IQ of all time or even in this draft class, but it is worth noting.

Let’s get to the real reason why you are reading this fine piece of writing, what is Jones going to do this year for your fantasy team? Unfortunately, due to recent reports, it sounds as though Jones has a lot of work to do before he is going to be NFL ready. Belichick has publicly announced that it seems like Cam Newton is going to be the starter heading into the 2021 season and it didn’t seem like it was particularly close. We saw what Newton can do, at his peak, in New England’s offense, but we also saw what his basement looked like. And it was bad. Jones has some appeal as a flier in the late rounds as a potential stash in case Newton’s season picks up where it left off last year,  but honestly, you’d be better off leaving him on the waivers and adding him during the season. Once Jones does slot into the starting role, it will provide a different look for the offense as the running game won’t be spearheaded by Cam’s rushing prowess. But again, I don’t think it’s a priority to leave your drafts with Jones for single-season leagues.

Dynasty leagues are a little bit of a different story. There is not a single dynasty league out there that should have Mac on the waivers. And if he is, you need to go scoop him up right this second. The Patriots didn’t take a quarterback at #15 overall to have him start in 5 years; he’s very clearly the “the guy” at the position for the foreseeable future and he should be treated as such. However, like before, he is just worthy of a bench (or even better a taxi) spot on your roster. Honestly, his ceiling might be your backup quarterback for his entire career. That’s not to say that Mac is a bad quarterback, but I believe there are better options to start for your team than him. I don’t have him in my top-12 quarterbacks for dynasty and I don’t know if I foresee that changing either. Unless he comes out of the gate balling out once he gets the green light, for fantasy purposes, he might just be relegated to a streaming option and/or bye week fill-in.