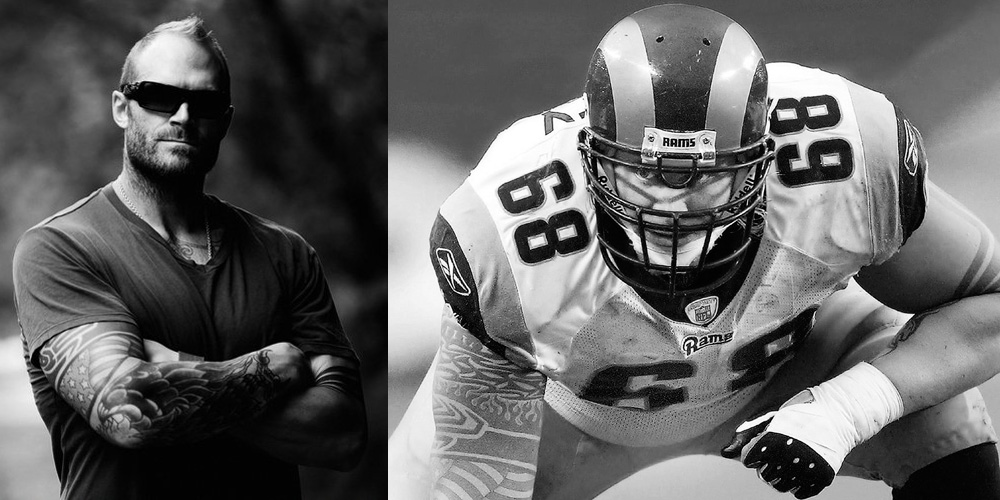 We have a very special edition of Blowin’ Smoke this week. I’m pleased to welcome NFL great and current musician of the week Kyle Turley. He has played for, most notably, the Saints but also the Rams and Chiefs. He is fresh off the 2012 Wild Wild West Tour with his band, Kyle Turley Band. He is also a huge contributor to the Gridiron Greats Foundation.

Check out all our free NFL Picks along with the latest NFL odds on our odds comparison page.

We have a very special edition of Blowin’ Smoke this week. I’m pleased to welcome NFL great and current musician of the week Kyle Turley. He has played for, most notably, the Saints but also the Rams and Chiefs. He is fresh off the 2012 Wild Wild West Tour with his band, Kyle Turley Band. He is also a huge contributor to the Gridiron Greats Foundation.

First off, tell our readers what you’ve been up to?

Lost my mind, literally, in Mexico for the 1st yr out of the league. Since making it back alive, long story, been non-stop touring & recording for the past 3.5 yrs, playing over 250 shows coast to coast, opening up for some of the biggest names in music.

What’s your favorite road story while touring as a musician thus far?

I don’t do favorites but I’ll say the most memorable was leaving Nashville late one night on our way down to New Orleans. We were delayed for one reason out of the usual 50 and thank God we were. For the time we lost and missed driving through one of the worst storms on record, that took over 300 lives. I’ve never had a scarier driving experience in my life. Not far south of the Alabama border, pitch-black lights only coming from passing cars, we started to notice the downed trees, as if a herd of dinosaurs ran through the Forrest across the highway, zigzagging for miles. I counted 23 ambulances pass going the opposite direction toward Birmingham from, what we later found out, the destruction of nearly the entire city. We played in & around NOLA that weekend & drove back to Nashville in the daylight, to see the unbelievable devastation tornadoes can cause, a humbling experience to say the least. I don’t worry about being late so much anymore!

Who were your biggest musical influences?

What’s your favorite concert you have seen?

Pantera, Slayer, Static X, Morbid Angel at Cox arena early 2000’s, the entire stadium floor was a pit \,,/ Aside from that, any Hank 3 show is a treat, I drove 10 hrs in the middle of a tour just to see his show in SLC when I could have taken the day off to rest before our show the next day.

What are some bands you’ve been listening to lately?

I pretty much just listen to satellite radio & bounce around between Outlaw Country, Faction, Liquid Metal, Hair Nation, Classic Vinyl, Alt Nation, New Wave & The Joint. If I’m not listening to one of those stations I’m listening to mixes of new music I’m working on, which I try to keep as fresh as possible as I build my body of work.

Do you have a favorite guilty pleasure band or song that nobody would expect?

I’m a huge 80’s fan! I’ll sing Karaoke with the best of them on any Cure song but that was what got you laid back in HS & Fascination St is still good for it today!

If you could put together a dream band of musicians dead or alive, including yourself, who all would you choose?

If it’s my dream, all I would do is take away Bass duties from Tom Araya & I would be the 5th member of Slayer but I guess Hell has to wait

You are part of the Gridiron Greats’ foundation. Can you tell us more about it?

We’re a ‘true’ nonprofit organization that assists our brothers of the Gridiron that have fallen into dire consequence situations medically or financially. The majority of NFL football players do not make the money you see flashed around tv & the old guys got completely screwed star or grunt. I teamed up with Mine Ditka because I knew his heart & intentions were pure in resolving these issues. Because of our efforts, more retired players today & future generations will be taken care of medically as they should be & that has been our focus. We know football is dangerous & we gladly accept the risks of such a violent yet fulfilling sport but a player shouldn’t have to spend all of his money earned mending his injuries from the game. A backward mentality has been perpetuated by our Union & the league for too long & I am proud to stand by Coach Ditka in the fight to break these unacceptable desires of get rich quick schemes handed to our children. This is our game & We will defend it to the end!

What was your favorite moment throughout your NFL career?

I was lucky to have a bunch of very cool moments. The two I’m most proud of were getting drafted & making it back from major injury to play again. In both moments I was able to experience the highest feelings of self-gratification only trumped by my kids.

Do You play Fantasy Football and how do you think it has affected the NFL?

Fantasy Football has taken control of the NFL. I don’t play currently because I don’t have time, maybe one day, until then I’m just your basic fan with a little bit more knowledge of the game.

And with that our Band of the week is obviously the Kyle Turley Band. check out all the great music and merchandise.