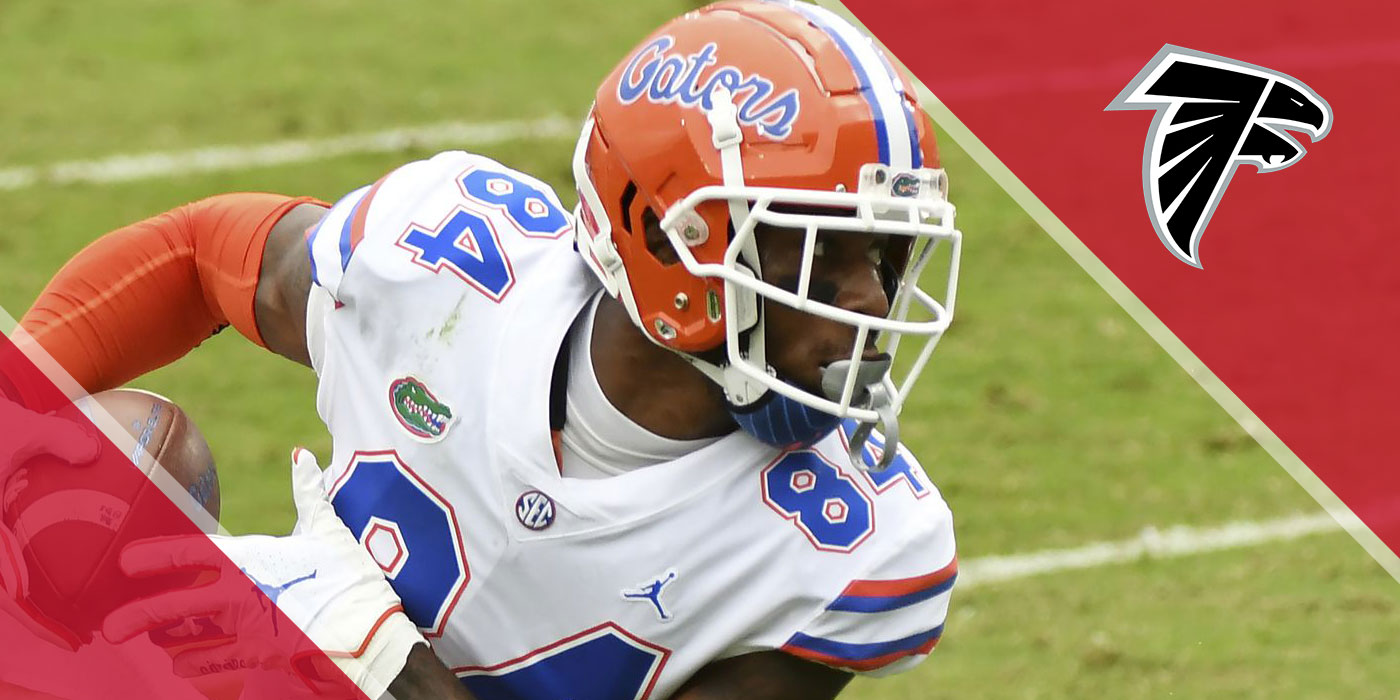 Pitts has a rare blend of size, athleticism, and ball skills. His ability as a pass-catching tight end could force defenses in his division to alter the way they construct their roster. He is a tough matchup for most linebackers and too big for most cornerbacks.  He offers offensive coordinators the ability to align him all over the field and become a highly targeted, highly productive pass catcher from the tight-end position.

ATLANTA FALCONS’ PAST USE OF TIGHT ENDS

The Falcons will have a new head coach in the 2021 season.  He is also expected to be calling the offensive plays.  Head coach Arthur Smith was previously employed by the Tennessee Titans as their offensive coordinator. In 2020, the Tennessee Titans ran 12 personnel, 15% more than the league average.  They ran the 11 personnel 25% less than the league average.

If you want to credit Titans’ success of run plays only to Derrick Henry, remember Henry too improved once Smith came on as offensive coordinator in 2019.  In 2018 Henry had 215 rushing attempts for1059 yards and averaged 4.9 yards per carry.

Upon Smith’s tenure as offensive coordinator, the Titans had a 10% increase in the success rate of plays called out of the 12 personnel.

But this is about Pitts. Tight-ends coach Justin Peelle has stated that both Hurst and Pitts will be on the field simultaneously. Aside from having two pass-catching tight ends on the field, the 17% differential increase of the percentage of pass plays is a reason for cautious optimism.  But also remember, last season, the Falcons passed the ball on 62.06% of their plays (ninth in the league) while ranking fourth in pass attempts per game (39.2).

WHO GETS THE BALL?

In a loaded offense, the question regarding targets is valid.  A lot will depend on the status of Julio Jones.  Last season Jones was on the field for nine games.  That is the most games he has missed since he broke his foot in 2013 and played in only five-game.  Then, of course, are the trade rumors.

However, Ryan threw 407 passes last season.  The Falcons finished the season as the fifth-ranked passing offense. There are targets to go around.

Last season in Tennessee, Smith played both Jonnu Smith and Anthony Firkser.  The tight-end accounted for 29.6% of the targets, which was fourth-most in the NFL. From Weeks 1 through 11, Smith had 30 receptions for 338 yards and seven touchdowns.  When Taylor Lewan tore his ACL, Smith moved inline for blocking, which derailed his fantasy production. There is little chance of that happening as Pitts is not known for his blocking skills, and you don’t draft a tight-end fourth to block.

We all know that the tight-end pool in fantasy football is shallow.  Pitts is that plastic rubber duckie that keeps you afloat.  According to Tommy Garrett at ProFootballNetwork.com, “With Jones in the lineup, Pitts was looking in the range of 90 targets.  Should a Jones trade take place, we might be looking closer to the 115-120 range.”

Pitts’s upside in redraft fantasy leagues is that he is listed as a tight-end but looks to produce as a wide receiver.  He is in a pass-first offense, where their tight-end last season finished as TE10 in PPR scoring. That should be the floor for Pitts, although rookie tight ends are notoriously unreliable.

Pitts has not yet turned 21. His dynasty potential is immeasurable.  He is on a team with a top-five passing offense, with a new head coach who is not averse to utilizing the tight end in the offense.

Pitts is in an ideal spot. While he is going extremely high in both best ball and redraft (he currently went first round in all my best ball drafts), you have to decide what type of draft capital you are willing to spend on a rookie tight end. In dynasty, there is no question.  Pitts deserves to be a first-round selection.

The Florida Gators football program has quite the history. When it comes to NFL Draft prospects, the Gators have definitely produced more defensive talent over the past decade-plus, but tight end Kyle Pitts has an opportunity to change that narrative. In fact, a tight end from Florida has not been drafted in the first three rounds since Jordan Reed in 2013.

A first-round tight end? Well, you’ll have to go back even further to 2004 and Ben Troupe. We mention the first round because you can bet your mortgage that Pitts goes in the first round and perhaps even top-10.

Pitts not only won the John Mackey Award in 2020 but dating back to 2000, he has the most receiving touchdowns of all past winners, catching 12 in just eight games.

Pitts is arguably the best tight end-labeled prospect we’ve ever seen, posting a receiving grade of over 96, according to PFF. Additionally, Pitts posted an average of six yards after the catch. What we’re getting at is this—don’t be surprised if there comes a time in the future when Pitts tries to receive the wide receiver franchise tag as opposed to the notoriously cheaper tight end tag.

Pitts’s strengths are unmatched and he’s one of those prospects where it’s not a matter of what he can do, but what can he not do?

There are two weaknesses when it comes to evaluating Pitts for dynasty fantasy football. The first is out of his control: He’s a tight end. Of course, a savvy coach will realize Pitts is unlike any other and use him as a receiving threat, but there are still those coaches out there that have the mindset of “He’s a tight end?! Well then therefore he must block!”

That is something that is out of Pitts’ control, but for prospective dynasty owners, let’s hope that he doesn’t end up on that kind of team (thankfully the Tampa Bay Buccaneers are picking 32).

Going back to his blocking, that is Pitts’ weakest aspect of his game. However, he did improve from a 42.6 pass-blocking grade in 2019 to nearly 66 in 2020, according to PFF.

Again, sure, it’s always nice to have a tight end who can block well, but Pitts is still only 20 years old and will not turn 21 until around Week 5 or so. He can get there.

All in all, Pitts’s value will partially be tethered to what team drafts him and will utilize him like the freakish receiving threat that we know he is.

Going down the draft board, there are about four teams in the top-12 that stand out: the Philadelphia Eagles, Carolina Panthers, Dallas Cowboys, and San Francisco 49ers.

The Eagles could be in the market for a quarterback with the sixth overall pick, removing them from the equation. Should they opt to stick with Jalen Hurts, though, and take Pitts, he could theoretically be their top receiving threat.

The Panthers are sort of in the same boat with incumbent Teddy Bridgewater, but Pitts is a possibility. In a Joe Brady-led offense with Robby Anderson, D.J. Moore, and Christian McCaffrey, adding Pitts would be a tough offense to stop.

The Cowboys defense was horrific in 2020, so passing up someone like cornerback Caleb Farley could be difficult. You have to admit though—an offense with Dak Prescott (should he return), CeeDee Lamb, Michael Gallup, Amari Cooper, and Pitts would be something of a galaxy brain offense.

Where it gets exceedingly interesting in the 49ers. Right now they have quarterback Jimmy Garoppolo who has certainly played better than we’ve seen of recent, but adding Pitts to a receiving group that features George Kittle, Brandon Aiyuk and Deebo Samuel would also allow for the 49ers to evaluate the artist also known as Jimmy G. If he fails with that group of receivers, it’s time to move on.

However, the 49ers’ offense pairs well with Pitts’s skillset. We know head coach Kyle Shanahan has a run-friendly scheme, but his offense also isn’t afraid to air it out downfield.

In the NFC West, there are some secondary threats, most notably Los Angeles Rams cornerback Jalen Ramsey, but Pitts can also out-maneuver press coverage, lining up against it on 40 snaps in 2020 and coming away with seven receptions that went north of 15 yards playing in the SEC.

Pitts will improve really any passing attack he joins, but with the right coach, that could also translate to high fantasy football values.

For dynasty, Pitts could soon join the ranks of the Travis Kelce’s, the Darren Waller’s, and the Kittle’s of the world.

Looking ahead to rookie drafts, Pitts would be a first-round choice for me, in the sixth or seventh overall range, behind players such as Najee Harris, Javonte Williams, Travis Etienne, Ja’Marr Chase, and in the area of Jaylen Waddle and Devonta Smith. Should Pitts go top-12 in the 2021 NFL Draft and to one of the four teams listed above, expect your pre-draft dynasty stock to soar.

But again, let’s be honest—pray to the fantasy gods that the Buccaneers do not somehow wind up with him. For reference, check up on how O.J. Howard is doing.