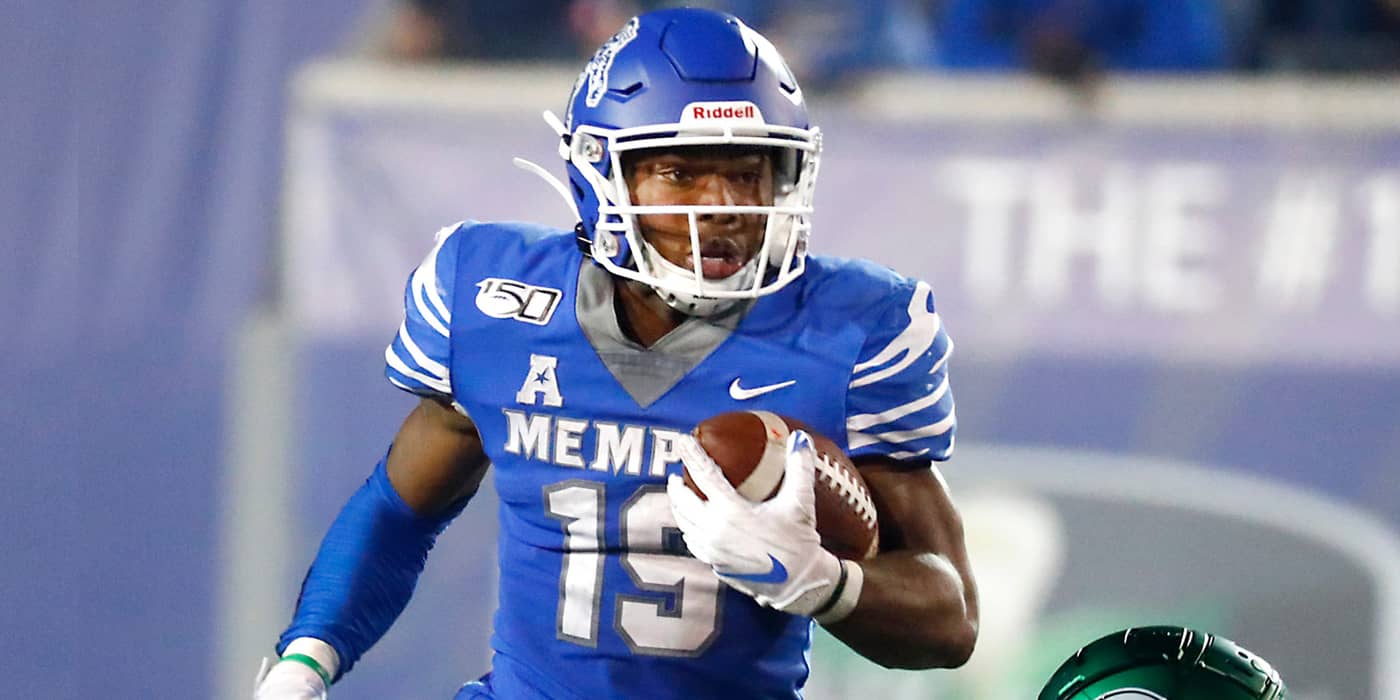 Memphis running back Kenneth Gainwell is an incredibly intriguing prospect in the 2021 NFL Draft. Gainwell sat out this past college football season. Still, the tape on him from the 2019 season shows the potential he has entering the NFL Gainwell is not the biggest back in the draft class. Yet, he has shown explosiveness and excellent receiving skills, which will allow him to provide flex value for fantasy football in his rookie season if he lands with the right team.

Gainwell last played in 2019 as a redshirt freshman. His teammate during the 2019 season was Antonio Gibson, current Washington Football Team running back. Gainwell outperformed Gibson during their time at Memphis. Gainwell had control over the ground game leading the team in rushing attempts with 231; Gibson only carried the ball 33 times in 2019. In the passing game, Gainwell brought in 51 receptions compared to Gibson’s 38. Gibson was explosive with his limited touches, which made him an enticing prospect in last year’s running back class. However, it cannot be overlooked that Gainwell held control over the opportunities at Memphis and was explosive in his own right. The question now is, will Gainwell be able to replicate the success of his former teammate in his rookie year of the NFL.

The greatest strength Gainwell has shown in his tape is the ability to burst through a hole with one cut and create large chunk plays with his elusiveness in the open field. Gainwell showed great instinct when running outside zone plays. He is patient while waiting for the hole to open up, and when it does, he puts a foot in the ground and gets upfield. Gainwell is not the most elusive back in this draft class, but he does have a wiggle to him that can make defenders miss. Another strength in Gainwell’s game is his ability as a receiver out of the backfield. Gainwell runs excellent routes and is very comfortable as a receiver. He even lined up in the slot for Memphis. An underrated part of Gainwell’s game and a skill needed in rookie running backs, in general, is his pass blocking. Gainwell is willing to pick up blitzers which is a necessity in the NFL if he is to become a three-down back. He can improve as a blocker, but his willingness to block in college is a good sign coming into the NFL.

There are two significant knocks on Gainwell coming into the NFL, his size and his lack of a resume. When we last saw Gainwell, he weighed in at 191 lbs. This is not the largest build for a back, but he can put on some muscle as long as it does not take away from his explosiveness. His weight is essential to note when it comes to his pro day to see if he has put any muscle on his frame. A more significant issue in my mind is that he only has one year on his resume. Since Gainwell decided to sit out this past season, the only tape on him is from 2019. While the tape shows plenty of potential, larger sample sizes are always nice when evaluating players. The hope is with the year off, he has committed to refining his game and working on preparing his body for the grind of the NFL, but until Gainwell is back on the football field, there is no way to know how he will look after the year off.

Going into 2021 dynasty rookie drafts, Gainwell enters as a top 5 running back prospect. His landing spot will be crucial when it comes to where he should go in rookie drafts. Gainwell will most likely go as a late first, early second-round pick in non-Superflex dynasty rookie drafts. However, if he lands in the right spot, he could find himself near the mid-first round of drafts. Best case scenario Gainwell provides flex value for your team instantly with the potential to become a solid RB2, much like his former teammate Antonio Gibson did for teams last year. However, Gainwell could also find himself buried on a depth chart and could be a wait-and-see player for Dynasty.

The best landing spots for Gainwell are teams that run a zone-blocking scheme and would utilize him as a receiver out of the backfield. The Arizona Cardinals are an intriguing landing spot if they move on from Kenyan Drake. Gainwell could step in and take over Drake’s role as an outside zone runner and receiver out of the backfield. Another intriguing spot for Gainwell would be the Tampa Bay Buccaneers. Gainwell would step into the Leonard Fournette role and serve as the change of pace and receiving back for the team. Both landing spots would allow for Gainwell to provide instant fantasy value for teams and the potential to be a solid RB2 by the end of the season.