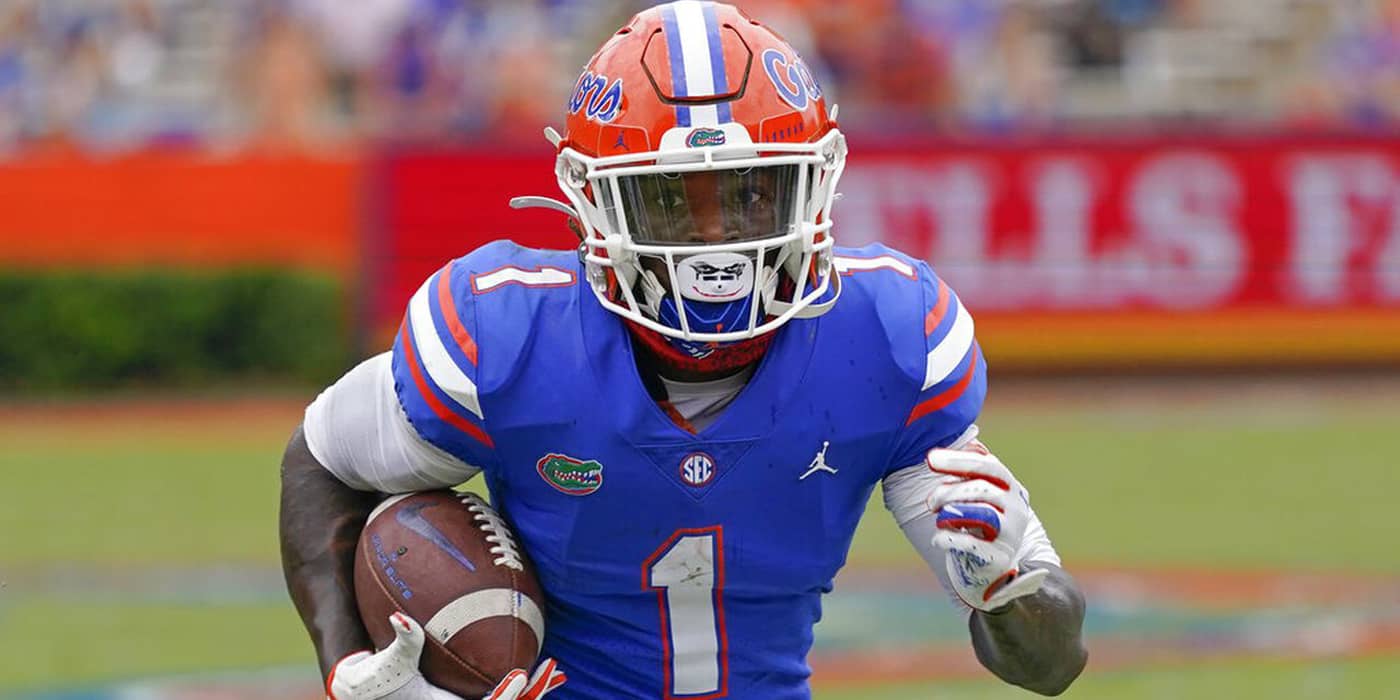 Asking scouts and talent evaluators about Kadarius Toney’s pro prospects is a lot like asking a room full of investment bankers what they think about Bitcoin. You’ll get lots of opinions, but very little consensus. And for good reason. While Toney is clearly an elite athlete with big-play ability, through his first three seasons at Florida he struggled with injuries and an ill-defined role in the offense. While splitting time between wide receiver, running back, and even some wildcat, he consistently flashed as a playmaker. But it wasn’t until his senior season that Toney really broke out, logging 70 catches for 984 yards, and ten scores as the Gators’ top wideout, and adding 161 yards and a touchdown on the ground.

Before the 2020 season, Toney had logged just 97 offensive touches over the course of his 27 game college career (50 receptions and 47 carries) totaling 1025 yards and three scores. On a per touch basis, the numbers are impressive, but it’s unclear if the lack of production overall was a byproduct of the team’s broader offensive struggles, Toney’s inability to consistently carve out a role, his struggles to stay healthy, or perhaps a combination of all three. Regardless, the emergence of quarterback Kyle Trask and Florida’s pass-first attack last season led to increased opportunities for Toney as a senior and he certainly delivered. The result was a 2020 tape that could have some teams slotting him in as a late first or early second-round pick on their draft boards.

An absolute home run threat any time he touches the ball, Toney combines elite straight-line speed with plenty of wiggle and lateral quickness, making him a nightmare to tackle in the open field. His development as a receiver last season was encouraging, as despite being asked to run a fairly simple route tree, he showed promise in creating separation and improved technique setting up deep patterns. His athleticism suggests he can continue to develop as a route runner, and while he lacks the ideal size to play outside he has the speed to excel as a field-stretching presence. He’s a hands catcher and displays a nice knack for tracking and timing the football, rarely allowing passes to get on top of him and showing enough patience to keep from tipping off defensive backs when the ball is in the air. Toney also can contribute immediately on special teams after taking over as the Gators primary return man last season where he posted a 22.1 yard average on kickoff returns and an impressive 12.6 yards per punt along with a touchdown.

Despite playing in a Florida offense that threw the ball more than 57.3% of the time (8th highest in the nation), much of Toney’s production was manufactured by getting him the ball in space via bubble screens and short crossing routes that forced defenders to try to corral him in the open field. Although many NFL offensive coordinators have embraced the idea of getting creative in the way they get the ball into the hands of their playmakers, a more fully developed route tree is still the key to consistent snaps at the next level, and Toney still has work to do in that respect. Additionally, that modified route package also meant Toney was rarely forced into contested-catch situations and that combined with his poor production as a blocker does raise some questions about his physicality. It’s not impossible to think that he can improve both aspects of his game, but it remains a question. Like many players with Toney’s explosive profile, at times he has a little too much confidence in his ability to turn every touch into a big play, deviating from play design and leaving yards on the field. When a player’s biggest strength can also lead to a glaring weakness, it’s hard not to view it as at least mildly concerning. Finally, while Toney did stay healthy for all of 2020, it’s important to note that he played in just eight games as a freshman and only seven as a junior, missing long stretches of both with injuries, something teams will likely take into account given his play-style.

Kadarius Toney is an intriguing prospect, but the temptation is to get sucked in by the 2020 production and the video game-like highlights. While his explosive playmaking ability is undeniable, the reality is that he still profiles as a somewhat unpolished and inexperienced slot receiver that needs some time to develop. As with any player, the landing spot for Toney will be the key to both his short and long-term fantasy viability. He’s the type of talent that could thrive under a creative offensive coordinator willing to leverage his strengths, but who will likely struggle early on if he’s slotted into a traditional slot receiver role.

The biggest fear with Toney is that he might run a forty-time that NFL teams find hard to ignore. Though talented, he’s still a bit of a work in progress with just one full season under his belt as an every-down receiver. An eye-popping combine could see his draft stock climb higher than it should, setting him up for expectations that he’s unlikely to reach in the first year or two of his NFL career. If that happens, he’s a stay away for me in redraft formats and likely becomes prohibitively expensive in dynasty drafts as well.