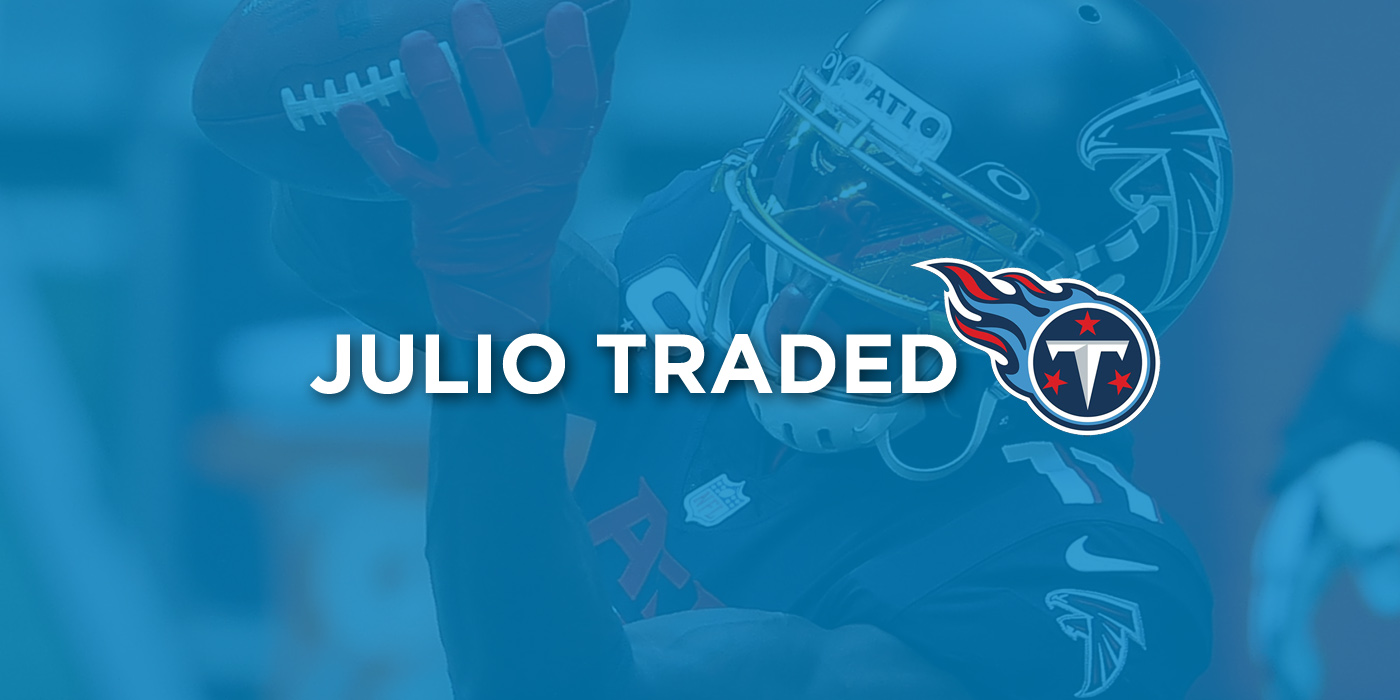 The Atlanta Falcons traded wide receiver, Julio Jones, to the Tennessee Titans on Sunday. The Titans will send a 2022 second-round draft pick and a 2023 fourth-round selection to the Falcons. Along with Jones, the Falcons will send a 2023 sixth-round pick to the Titans.

“Excited to add Julio to the football team. He’s excited to be part of what we’ve got going on in Nashville. It’s a big day for our team,” Titans general manager Jon Robinson told reporters Sunday.

Odds Update: Currently the Titans are +210 to win the AFC South. They have the same odds as the Indianapolis Colts. If you’re thinking about placing a wager on either of these teams, make sure you use William Hill esports bonus. The heated rivalry should make for some good football this season. Surprisingly, both times these two teams meet are not in prime time spotlights, and oversight by the league’s schedule makers if you ask me.

Ryan Tannehill has a lot to be excited about. After an impressive season with the Titans last year, which included a career-high in passing TD’s (38) and 3819 passing yards, (highest since 2015) Tannehill has been gifted the addition of one of the best wide receivers in the game. The veteran superstar will play opposite of 23-year-old stud WR A.J. Brown, giving the Titans one of the best passing attacks in the AFC. Not to mention already having one of the hardest running games to try to stop with Derrick Henry, the Titans should be a team to target in Fantasy in 2021.

Although, Fantasy critics will always try to find the negative in such a trade. Claiming Henry will see fewer carries or Brown will see fewer targets. This is a far argument, however, as a team, you need to see the potential of more overall output. For example, while the Titans did rank 4th in PPG, and 3rd in yards per game, they were 23rd in passing yards last season. Also, despite Tannehill’s strong 2020 season, the Titans QB ranked 26nd in the NFL for deep ball completion percentage, according to FantasyData. By adding a player like Julio Jones, Tannehill’s deep ball attack should improve, meaning more redzone opportunities, more defensive focus by opponents to have to account for the deep throw, leaving less double coverage on A.J Brown and fewer men in the box to stop Derrick Henry. With a good balance of play-calling, the Titans have a chance to improve one of the only lacking aspects of their offense, and have a chance to become one of the top teams in the league. I don’t see this trade lowering the ADP of any Titan players.

It seems odd that the Falcons passed on Ja’Marr Chase to draft Kyle Pitts knowing very well that trading Julio was on their to-do list. Nevertheless, Calvin Ridley is the clear winner out of anyone in this trade as he should see a spike in targets and emerge as the team’s clear number one WR, even though he already was.

Fantasy owners will also likely overdraft Pitts this year, due to the writing on the wall. I would feel better about his fantasy stock if they stripped his position title of tight end, and played him at WR. The history of rookie Tight Ends isn’t very encouraging, but maybe this is the year Pitts breaks the mold. Currently, Pitts is TE12 in ADP, which seems fair.

The Falcons WR2 spot should become the talk of the summer. Russell Gage is the obvious choice, but keeping an ear to the ground might be a smart idea as someone could emerge from Falcons training camp if they were looking to move Gage to the slot. Gage is 6’0, 185lbs, and may be better suited lining up on the inside. Although, Olamide Zaccheaus is even smaller at 5’8. The Falcons may have unloaded age and salary by trading Julio, but as it stands the tallest WR on the team currently is Tajaé Sharpe at 6’2. Add another point to the pro-Kyle Pitts list as the rookie stands tall at 6’6.

The Falcons should be a fun team to watch this year, although it’s hard to say they are in “win-now mode” after giving up on Julio for just a 2nd round pick. The team is currently +800 to win the NFC South.