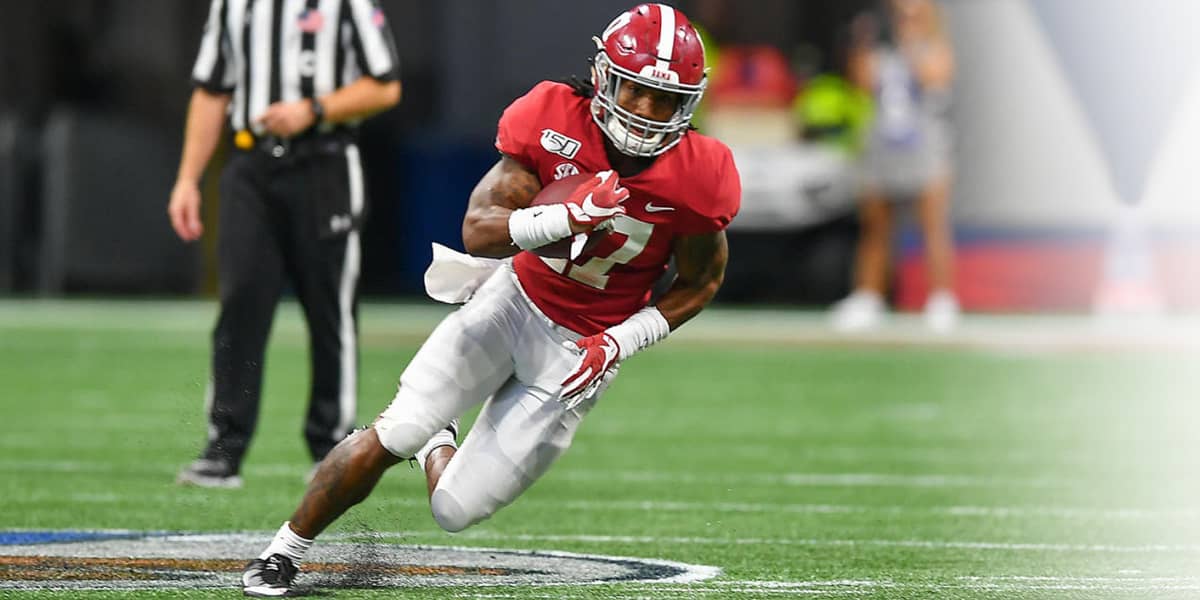 One of the most exciting wide receivers in this year’s draft class is Jaylen Waddle. Waddle was on his way to having a great 202o season until he broke his ankle against Tennessee. Waddle ended the season with 28 receptions for 591 yards and 4 touchdowns, averaging 21.1 yards per reception. In my opinion, if Waddle had stayed healthy, he would have been fighting it out with DeVonta Smith for the Heisman Trophy. Waddle is an explosive receiver who can line up on the outside or in the slot, which should provide fantasy value in 2021 and for years to come. Waddle has all the tools to be a hit in the NFL and for fantasy, as he is a swiss army knife type of player who is a threat to score on any reception. Waddle isn’t the biggest or strongest player, but he does have a Tyreek Hill type of frame which should bode well in the NFL.

Coming out of high school, Jaylen Waddle was a 4-star recruit, ranked 5th wide receiver in the 2018 class, and was a top 40 overall player. Waddle had the high school pedigree and made the transition from high school to college look easy. In his freshman year in 2018, he played in 15 games and had 45 receptions for 848 yards and 7 touchdowns, averaging 18.8 yards per reception. These numbers are exceptional for a freshman who competed for targets with DeVonta Smith, Jerry Judy, Henry Ruggs, and Irv Smith Jr.

Waddle’s biggest strength is his blistering speed. Whether he plays on the outside or in the slot, he can burn defenders and is a threat to score on any play. Waddle’s speed and acceleration give him an edge on most defenders as they can’t live with his raw pace. In this year’s draft class, there are plenty of quick receivers, but none are as explosive or have the acceleration that Waddle has. Waddle can easily take the top off a defense or break a long run for a touchdown. He also plays on special teams, so there’s always a chance of him going to the house right from the kickoff. He is surprisingly good at contested catches for a guy who’s only 5’10, but whether NFL quarterbacks will throw it up to him in tight coverage with bigger and stronger defenders around him, only time will tell. Another of Waddle’s strengths is his ability to run after the catch. Waddle has great vision, and with his quickness and agility, he can make defenders miss all day long. Waddle is the type of player that can be fantasy relevant in every game he plays, even in tough matchups.

Many people would be hard-pressed to find a weakness in Jaylen Waddle’s game, but nobody’s perfect. Going back to 2019, Waddle did have issues with drops, but after seeing him in his limited playing time in 2020, I think these were drops based on him not being focused, and it looks like he cleaned that part of his game up. He will need to bulk up a bit to deal with the big hits that will come his way in the NFL, but that should come with time. He also needs to make sure his route running is crisp. He ran a lot of routes at Alabama, and if he can really work on running just as fast in his routes as he does with the ball, he will be a matchup nightmare for any defender.

This year’s draft class is full of good wide receivers, so I imagine there will be at least 4 wide receivers taken in the first round of rookie drafts. For me, Waddle is the third-best receiver in this year’s class after Ja’Marr Chase and DeVonta Smith. Waddle should go between picks 1.06 to 1.10 in most drafts. In most of my rookie mock drafts, he comes off the board at the 1.08. Even in Superflex or 2 quarterback leagues, he should be coming off the board at the end of the first round. If you have a late first-round pick in your rookie draft, keep an eye out for Waddle, and don’t be afraid to take him as you could be getting a wide receiver 1 for the future.

There are several potential landing spots for Jaylen Waddle as many teams need an upgrade at the wide receiver position. The Detroit Lions have the 7th pick in this year’s draft, and Detroit could be a good landing spot for Waddle. Detroit is going through a rebuild and does not have many wide receivers on their books. They also need to try to build an offense around Jared Goff that will show off his skill set. Waddle could be that Robert Woods type of player in this offense who can receive the ball out of the backfield and be one of those trick play receivers. If he lasts until pick 19 in the draft, the Washington Football Team would be another good landing spot for Waddle. Washington needs another wide receiver to take the pressure off Terry McLaurin. If Washington manages to get Waddle in the draft, they could use him as a field stretcher taking all the attention off McLaurin and providing Washington with some big playability. The New York Giants are another team that could land Waddle. The Giants need to give Daniel Jones a featured weapon in their offense, and Waddle would have all the tools to be that weapon. The Giants offense has a history of injuries, so if they take Waddle with the 11th pick, they will need to make sure he is fit and has no lingering issues with his ankle. Detroit and Washington would be my preferred landing spots for Waddle, but he should be a major asset for any team that takes a chance on this explosive receiver.

I’m from Dublin, Ireland. Moved to Toronto, Canada in 2018. I’ve been a big NFL fan ever since college. I’m a Seattle Seahawks fan. I play in dynasty and redraft fantasy football leagues and love writing and talking about football. I’ve only been writing regularly since last year but I’m gaining more experience with every article I produce. I can talk about football all day long so if you have any questions hit me up on Twitter at @SwampDonkey_90. Outside of football, I’m a big Leeds United soccer (football) fan. Being a Leeds and Seahawks fan provides lots of ups and downs but hopefully, my articles will provide the right balance of content.