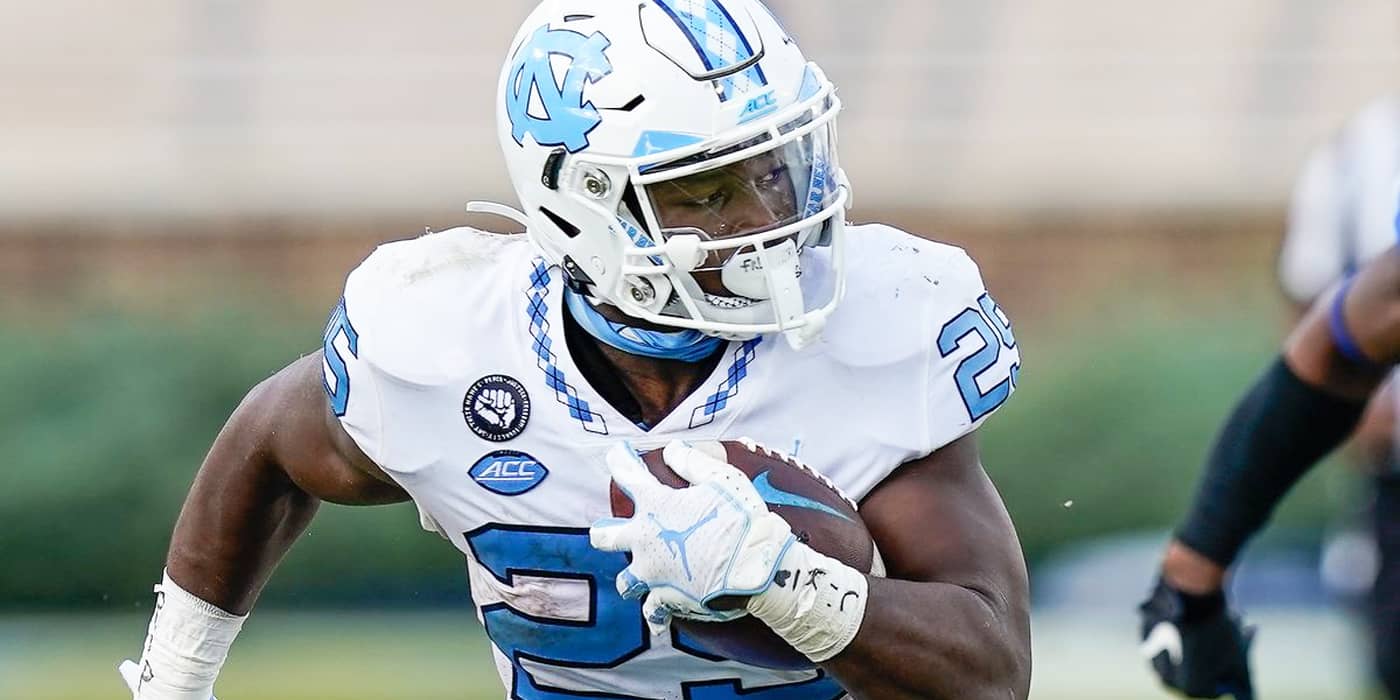 Javonte Williams is a very interesting running back prospect set to enter the 2021 NFL Draft. He’s a big, physical RB with a bruising running style. Williams is capable of breaking off big plays for huge yardage with his ability to see the field cleanly and ability to roll over his opponents. Williams was a workhorse for the North Carolina Tarheels the past three years racking up over 2200 yards and had 54 total touchdowns.

The first thing that I usually look for when I’m watching tape of a player is the type of offensive scheme they are in and how they play in this scheme. North Carolina’s scheme is pretty straightforward. They utilize mostly a single back in the backfield, which leads to them running a significant amount of draws, gaps, and dives. Truthfully, Williams is perfect for this scheme. He has the ability to make one cut and then accelerate to the whole with an astonishing amount of agility and quickness. One of the things that I’ve grown to love about him is his power to size ratio. This man is 5-foot-10 but weighs 220 pounds. He’s essentially a bowling bowl through the LOS and is incredibly difficult to bring down.

Speaking of being difficult to bring down, one of the only ways you are bringing him down is by the legs. A lot of his power stems from his legs and if you attempt to tackle him up high, you better be one of the strongest humans on earth because he will keep running and drag you with him. Not only does he have exceptional power while he is running, but his elusiveness is second to none. Williams led the nation in forced missed tackles per carry last season with 0.48. That means that on every 2 carries, he was forcing at least one missed tackle. That’s an exceptional rate as the next highest guy in the nation was only at 0.36. Williams is tough to bring down in more ways than one as we have seen.

I think an aspect of his game that goes unnoticed is his vision. As I said, Williams played in a pretty straightforward, one-cut scheme that didn’t have him rely on reading the blocks in front of him. However, his tape says otherwise. This man isn’t as patient as other runners in this year’s class, but what he lacks in patience he makes up for in quick decision making. Williams consistently looks for where his blockers are supposed to be blocking for him and if the hole isn’t there, he will find another one that has been opened up. Throw in his agility here, and he makes a designed run play to the left go right for 10+ more yards than it should have gone for. This decision-making will allow for Williams to thrive in multiple different types of offenses at the next level.

I’m aware that most of you don’t know me, but like most people, I love a good running back that can catch the ball out of the backfield. While Williams may not be the “best” at this in his class, he sure is pretty darn good at it. He can run screens and bubble routes and when you combine that with his elusiveness, he turns them into much bigger plays than you’d expect. That’s not even the part that I love though. What we look for in a lot of receivers is the ability to create opportunities when the play breaks down and your quarterback is scrambling. What I love the most about Williams is that he is able to do that out of the backfield. He can seemingly turn a curl route into a shallow post route and take the ball an extra 20+ yards. It’s remarkable seeing him work in the open field. Oh, and his pass-blocking is absurd as well.

As much as I wish it was, Williams isn’t the perfect prospect or the second-coming either. He has a lot to love about his game, but there are still places he needs to improve. I’ve been harping on the fact that he can create space and explode through the line with the best of them. However, once he is in the open field, he lacks elite speed that allows him to take a breakaway play to the end zone. You’d have to expect this from a guy that is his size at his height as he has a lot more weight to carry than a lot of those that are 5-foot-10. While the elite speed isn’t that big of an issue due to his ability to fight for extra yards if he is caught, NFL teams are going to see this as a detriment. Nobody wants to see their running back have a long play just to get stopped on the 5-yard line.

The other concern that I have for Williams is that he was surrounded by a fantastic group of playmakers at North Carolina. The quarterback situation was stable and he had a good change of pace back to swap out with. Not to mention his receiving core kept the secondary honest, which allowed for him to not face many stacked boxes in his career. His O-Line did a phenomenal job at creating space for him to maneuver as well. I worry that Williams may have inflated numbers due to the attention not always being on him. When you have an offense that has to be respected in multiple different areas, that usually means some big plays can happen for certain players as they won’t have as much attention on them. Williams is amazing, but let’s hope it’s more his skill set and not him being a product of being overlooked.

All-in-all, Williams is a slam dunk for me. I think he is going to be an absolute stud at the next level and any team that gets him should immediately put him into a feature role. He has all of the characteristics that you want at the next level. He has the ability to stay on the field for 3 downs and he is very durable. I think that he is going to be overlooked by many people due to Carter’s presence and senior bowl production, but he should be a bargain pick as he will probably go in the late 2nd to early 3rd round.

If he lands in a place like Pittsburgh or Arizona, he could push for the #1 overall spot in upcoming rookie drafts. Pittsburgh seems more likely to draft a running back in this year’s draft, but don’t put it past the Cardinals at salivating and taking the leap on a guy like Williams. Both of these teams love throwing to their running backs and would happily take a guy who can bulldoze his way into the end zone the way that Williams can. Both of these offenses also have very potent passing attacks and would benefit from adding a playmaking running back later in the draft which is exactly what Williams can bring. This season will be very exciting once you see his name come off the board.