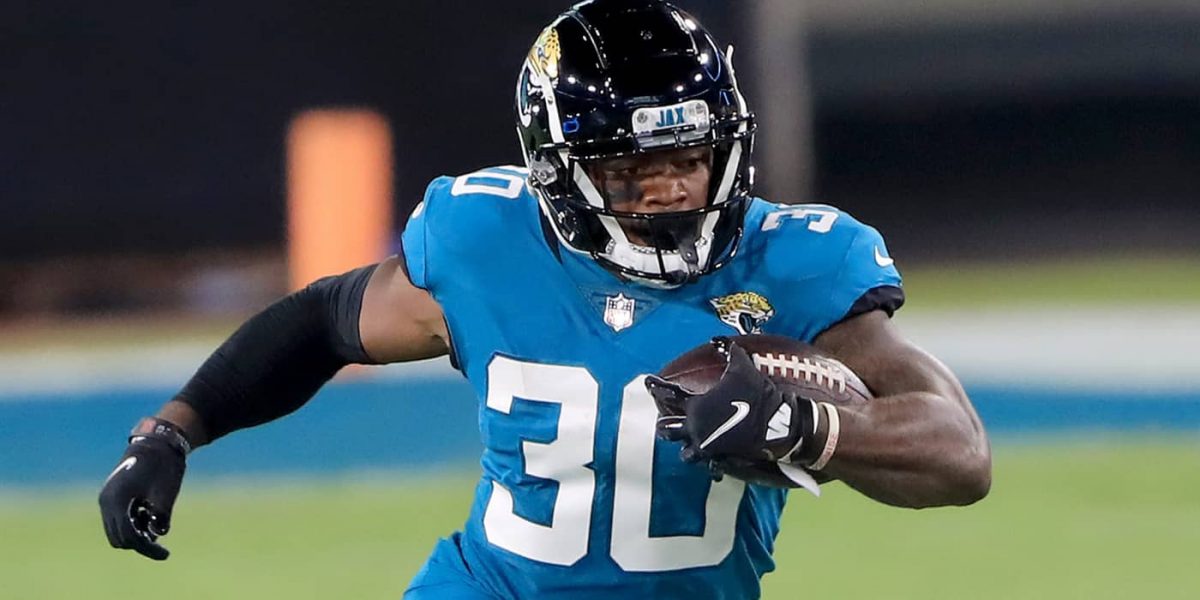 One of the most talked-about players in fantasy football this year is Travis Etienne, selected by the Jacksonville Jaguars 25th overall in last year’s NFL Draft. Etienne suffered a Lisfranc injury that ended his 2021 season.

This set up James Robinson for another productive season after a breakout rookie year where he ran for over 1,000 yards. Robinson was an undrafted running back out of a non-power five school who plays one of the most replaceable positions in football.

With both RBs heading into training camp, fantasy football managers want to know, who is going to be the starter?

The first thing to look at when evaluating a player for fantasy is their ADP. James Robinson’s ADP (as of early May) is 78, which means on average, he’s being drafted in the middle of the 7th round. Can he outperform this price tag?

In order to evaluate whether or not he’s a good value at his current ADP, let’s look at him from all angles. First, the good.

When I think of James Robinson I think of production. Through his first two seasons, he’s finished as RB7 and RB24. A cynic might see this decrease in the overall finish in 2021 and make it a referendum on J-Rob’s talent. But I’d argue it had nothing to do with that. In 2021, the Jaguars hired Urban Meyer as Head Coach and he drastically changed how the RB room was used. Robinson’s rush share decreased from 71.2% to 41.8% and his targets per game dropped from 4.3 to 3.3 from 2020 to 2021. Even with all of this decrease in workload, Robinson was actually more efficient in 2021. His rushing TD% increased from 2.9% to 4.9% and his Y/A increased from 4.5 to 4.7.

I’d argue then that his decrease in production was a result of a lack of volume. Urban Meyer is now gone but he is replaced by Doug Pederson, who never had a running back receive more than 200 carries in a season during his tenure with the Eagles.

Now, the bad. The return of Travis Etienne.

Etienne was a first-round pick in 2021 so you would have to imagine Jaguars ownership wants him to receive the bulk of the workload. He was a phenomenal player in college as well, amassing 6,107 yards from scrimmage and a combined 78 touchdowns from both the ground and the air. The only downside is that Etienne is recovering from a Lisfranc injury, and while a study suggests that most players will recover fully after an average of 11.1 months (which means he should be “recovered” by July), it’s still something to consider. There’s a real possibility that the Jaguars might take it easy with Etienne this year, opening up more opportunities for James Robinson.

However, Robinson has an injury of his own that we need to discuss. J-Rob tore his Achilles late in December last year and there is some uncertainty that he might not be ready for the start of the 2022 NFL season. In the past, the results of Achilles tears have been abysmal, as seen by a 26% rate of never returning to the NFL. However, the Rams’ star running back Cam Akers made headlines after returning to play a little over five months after tearing his Achilles injury, much faster than the average nine months of recovery. While this is anecdotal, and possibly an outlier, it gives fantasy managers hope that James Robinson will be ready to play come Week 1.

So, where should fantasy managers be looking to draft Robinson?

I think his ADP is a little high. I would have a hard time drafting him when players like Devin Singletary and Marquise Brown are going several picks after him. When I’m drafting in the later rounds, I’m looking for upside and league winners. James Robinson does not fit those categories, and that is why I’m out on him at his current ADP.

James Robinson is currently RB39 in our RB Rankings

Jacob White is an avid fan of all things NFL, particularity fantasy football and the Chicago Bears. He is currently studying Economics at Wabash College where he hopes to learn the skills to further his career in the sports entertainment industry. He specializes in redraft and best ball, where he routinely finishes at a profit, including a 2020 13-0 finish on the high stakes KFFSC platform. You can find him on Twitter @FF_JacobWhite for additional advice on all things football and the semi-occasional homer tweet.