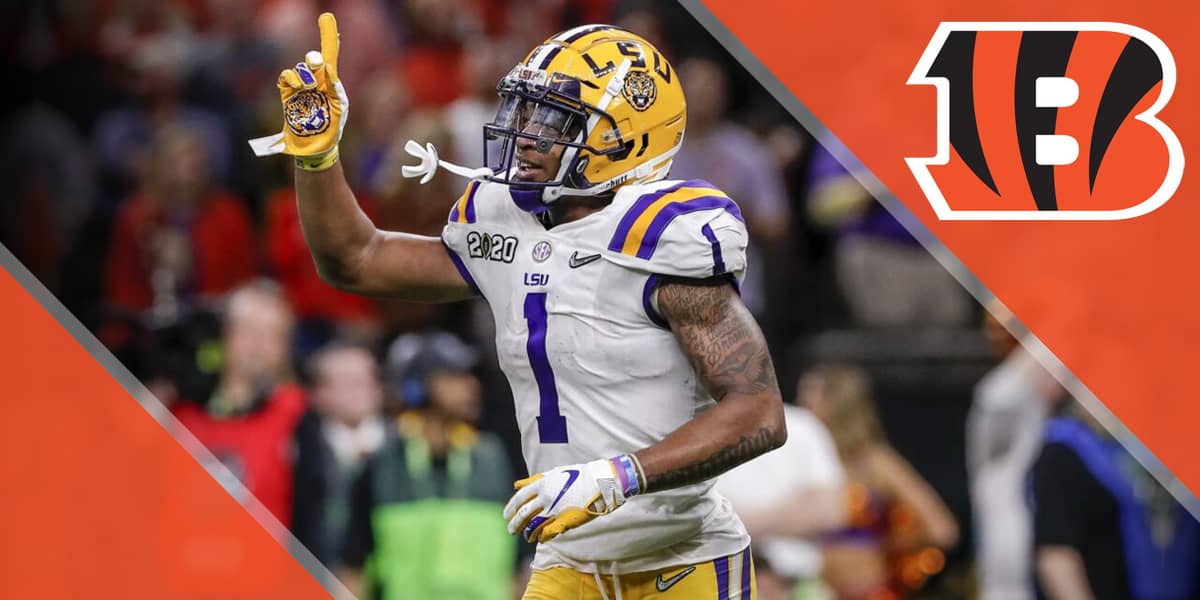 What a night the world witnessed on Thursday. There were future stars taken early and often that left most of us salivating at the idea of what they can do in fantasy for years to come. With the 5th overall pick, the Cincinnati Bengals selected Ja’Marr Chase making him the first wide receiver off the board in a wildly deep receiver class. There was speculation that this may not happen, but Chase is reunited with his college quarterback Joe Burrow. As you may recall, this duo set the world on fire in 2019 as Chase led the country with 1,780 receiving yards and an SEC record-setting 20 touchdowns. To say the excitement in Cincinnati is high is an understatement.

The last receiver to be drafted this high by Cincinnati was back in 2011 when they drafted AJ Green at #4 overall. While Green isn’t the prolific receiver he once was, he is leaving behind 104 targets to be potentially scooped up by Chase. Cincinnati did draft Tee Higgins last year and Tyler Boyd is showing that he can man the slot, but a true alpha receiver was missing and Chase can certainly fill this void. Plus it can’t be understated the chemistry that is already formed between Burrow and Chase. The offensive line did see major upgrades this offseason and during the draft, which will only benefit Chase as well given the fact that Burrow will have more time to get throws off. The bottom line is, look for Chase to make an immediate impact on this team and be Burrow’s favorite target in 2021.

In redraft leagues, Chase doesn’t slot into the WR1 discussion yet, but he is well worth targeting and drafting to be your WR2. The Bengals threw the ball 581 times in 2020 (14th) and rushed almost 200 less times than that. This was without Burrow for a number of games. What happens when he’s healthy for a whole season? It’s very apparent that Zac Taylor, who comes from the Sean McVay coaching tree, is committed to giving his young quarterback the green light on slinging the rock and this is only going to benefit Chase. While it’s unrealistic to believe that Chase will have comparable numbers to that of his former LSU teammate Justin Jefferson, it’s not out of the question to see him produce similarly to that of fellow teammate Higgins in his rookie year (67 catches, 908 yards, and 6 touchdowns). The upside is there in an offense that projects to be much better than last year. As long as you’re okay with taking a little bit of a risk, Chase may very well burst onto the scene and hit the ground running from day one.

In regards to dynasty leagues, Chase is my favorite target as the number one overall pick in 1QB leagues and you can argue that he should be a top five overall pick in superflex leagues as well. Chase’s value will increase to astronomical numbers after he transitions to the speed of NFL play and gets acclimated to the league as a whole. There are just entirely too many factors working in his favor to not see him blow up. He should have Burrow for a sizeable portion of his career and he’s on a pass-first offense that lacks a true #1 receiving threat. I have a hard time believing that you’ll be able to buy Chase at a discount of any kind right now (due to him not playing an NFL snap yet) and I believe he’ll be darn near impossible to pry away from an owner after this year. If there is an even slight window open on acquiring him in any dynasty format, you need to rush and make some sort of deal for him right now. You will regret not having him on your team if you pass on this chance.

This article was written in two parts. The follow was the Pre-Draft scouting article written on April 6th.

Ja’Marr Chase’s route running, hands, ball skills, and after-the-catch ability make him an elite prospect that is projected to be drafted in the top 10 of this year’s NFL draft. Chase is a little on the shorter side for a truly elite wide receiver (though he doesn’t play this way) and while his athleticism allows him to do great things on the field, it’s not the be-all-end-all of his game. Some would say his speed could have been better as he ran an unofficial 4.38 40-yard dash on his pro day. However, say what you want about the negatives to Chase’s game, this man will be a force in the NFL and is a fit for any scheme that he’s thrust into.

I’ve said it once and I’ll say it again, if you haven’t watched some sort of tape on any of these rookies, it would behoove you to do so. Watching Chase’s route running is like watching art. It’s truly a thing of beauty. Chase is able to make one more and have a DB on skates as if they were playing on ice. Chase made many NFL corners look silly as a sophomore, which is baffling. He opted out last year, but that doesn’t mean his game took any steps back. Recent videos have shown that his route running is still as good as ever. If he can make top NFL prospects and draft picks look like they don’t know what they’re doing at 19 years old. What can he do to them after he has had two years to harness his craft?

While everyone looks at Chase and notices his route running, I feel that an underrated part of his game are his hands. He’s such a reliable target for literally any quarterback that would be throwing the ball to him. You see him make these acrobatic and challenging catches look so easy and they’re not that easy to make. There are NFL players that can’t make catches like that, let alone make them so routinely. Pairing his hands with his larger frame makes him an absolute matchup nightmare as he also makes contested catches look easy. If you want to keep him from catching the ball, you either have to hope he is overthrown/underthrown or you can somehow get your hand on the ball at the exact right moment. The bottom line is, Chase is going to catch a lot of passes in the NFL.

You see a lot of receivers give themselves up to avoid injury in today’s game and that’s all well and good, but it takes away the beauty of the RAC game. Chase is not one of these players. Once the ball is in his hands, he’s a human highlight reel that just continues to make play after play. While Chase has a large frame, he’s able to shift past defenders and use an obscene amount of elusiveness to extend the play. You see a lot of receivers do this when they are smaller, but Chase is able to do this after he just bullied you off the ball. Not only is he going to make you look bad with his route running, he’s going to make sure he asserts his dominance and catch contested passes but then also break your ankles after the catch to get those extra yards. Combining all of this makes Chase a truly special player.

While Chase is one of the most technical players in recent memory, a downside to his game is his speed. He’s not elite when it comes to open field burst or speed and it shows as he has to “work magic” to make sure defenders don’t bring him down. His athleticism is unique, but it’s not the greatest that we have ever seen in a prospect and it’s not even the greatest in this class. There are a lot of things that Chase does right, but there are fundamental parts to his game that should not be overlooked. While he is the top wide receiver in this class, this is due to his technical ability and his way to “play faster” than he actually is. Don’t let his speed deter you. He’s still got the makings of being a once-in-a-lifetime player.

You keep hearing whispers from Joe Burrow that he wants to be reunited with Chase this year. I mean, why wouldn’t he? Burrow was the quarterback for Chase in 2019 when he set the absolute world on fire. Do the Bengals have a lot of other needs? Yes. Do the Bengals need a wide receiver who can play on the outside? Yes. They are selecting at #5 and no one knows what Mike Brown will do, but it’s looking more and more likely that Chase is the guy they are taking. While they will still need to make a splash at offensive line in later rounds, this offense will take a giant leap forward with Chase present. He will add a much-needed presence for this offense and force a 2nd-year leap from Joe Burrow that we are all salivating for.