Far too often, we get into bland online leagues with anonymous strangers. There’s no tradition, camaraderie, or relationships to these leagues. Sure, they can help make an NFL season a little more exciting, or occupy a little time, but nobody really gets too excited about these random leagues, and before you know it, January arrives and they disappear, never to be heard from- or thought of- again.

But as someone who has participated in no less than several hundred leagues in two-and-a-half decades, I do feel that there are plenty of things that the average fantasy league can do to become extraordinary.

To really build the kind of league that you can see lasting and keeping family and friends together, you need to think outside the box, while never forgetting the main point of fantasy football- and one that gets lost far too often in the chase for money or prizes- to have fun.

The key is to differentiate yourself from the crowd. That means both remembering old traditions but also embracing today’s technology and advancements. You have to make your fantasy league more enjoyable by giving your league-mates more reasons to care. Once people invest more than just cash into a league, you’re onto something that has the real possibility of becoming great.

The following ideas should help improve your Fantasy League!

7. Switch to a Dynasty/Keeper league

It would be a lot harder for fans to invest in the local team if there was complete roster turnover each season. The same holds true for fantasy sports. Even creating a hybrid keeper/dynasty where owners keep as few as three players a season can do wonders for keeping owners invested by building traditions and can add an added element of strategy to trades and roster management.

Once you keep the same players on the same teams, it also opens the door to start tracking individual records and building league-wide camaraderie.

After you’ve established the ability to keep players, allowing downtrodden teams the ability to trade off current players for future investments can re-energize what would otherwise be a lost fantasy season.

It can be depressing to invest so many months of research only to have an injury bug hit and ruin a promising season before November even arrives. By allowing these unlucky owners to trade off players to contending teams for future draft picks, you can keep them interested and invested in building for long-term success.

Without the ability to acquire these future picks, there’s not much reason for the owner of a 2-6 team to continue to put in time with waivers and lineups. However, the prospect of entering the next season with multiple first-round selections would certainly keep an owner engaged- and that’s how you build strong owners and a better league.

Bonus Tip: To avoid any problems with league managers leaving the league after trading away future picks, enforce a rule that makes those league managers have to pay half of their future league fees in advance. This is to help the longevity of your league, as it can make recruiting new league owners very easy if they get a discount on league fees if they’re taking a team on that has poor talent or missing draft picks. Us a Google Spreadsheet to help stay organized.

5. Use a Blind Bidding Rule for Free Agency

We’ve already established how life can be hectic at times. The easy solution might be to utilize “first come first served” waiver claims, but easy isn’t always better. Maybe somebody in your league got called away for an emergency, or sales conference in Sheboygan. Not everyone can be at the computer, ready to make that claim all the time.

Instead, add more strategy into your league by giving everyone a budget for free agency. This will allow all members of the league access to any player every week, but also make each owner consider strategy for the short and long term.

You could even kick it up a notch by allowing free agency dollars to be included in trades, adding a further strategic element to your league.

Just because that magazine you picked up published some standard, or unimaginative scoring rules doesn’t mean that your league is obligated to follow along. It’s your league, so don’t hesitate to ask your league-mates what they’d like to include as bonuses.

This can even include “outside the box” thinking. I’ve heard of leagues giving bonuses for all sorts of things- even commercials, or points for knocking over the guys that stand on the sideline holding the down markers. It’s all fair game- even if it’s a nightmare to score.

Sometimes we forget the whole point of fantasy football is to have fun. If going against the grain and making quarterback touchdowns worth six points, tight end receptions worth 1.5, or adding a 10-point bonus for one-handed catches sounds like fun, go for it!

Once you’ve established a solid league and have the same members returning year after year, you might need to discourage owners from losing interest or “tanking” for the first pick. It might be nice to have next season’s top pick, but it should be the other 11 members of the league’s duty to make the number one pick less of a reward, and more of a hassle.

Providing refreshments for the draft, serving drinks, humiliating photos, rolling out a red carpet for the league champion- all ideas that both discourage intentional losing and encourage fun- at least for the other 11 owners. Check out more Fantasy Football Punishments here.

2. Use Airtime App For Live Chat

A lot of draft platforms have dropped the ball when it comes to live chat in fantasy football leagues. If you want to keep things fun and exciting, you’re going to want to keep everyone connected. Airtime has taken things to the next level, their chat has a ton of amazing features to keep your league from becoming boring or mundane. The app is beautifully designed and offers a ton of features.

Here’s where you can learn more about how fantasy leagues are using airtime. 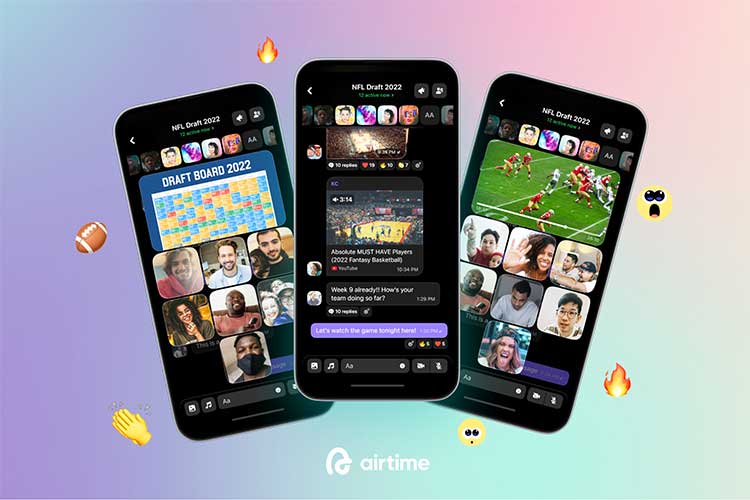 This can be tricky to pull off in today’s busy world, but I love counting down the days each summer until that special, late August Saturday arrives, once per year. It’s like a second Super Bowl- a chance for all of the fellas to get away and get out of the house, drink a few cold ones, make fun of each other and build the next fantasy football championship squad.

I’m telling you, there is nothing more fun than getting everyone over and having a live draft. If you can get it organized, I would definitely try to make it happen. It will set the stage for a fun fantasy league for the rest of the year.