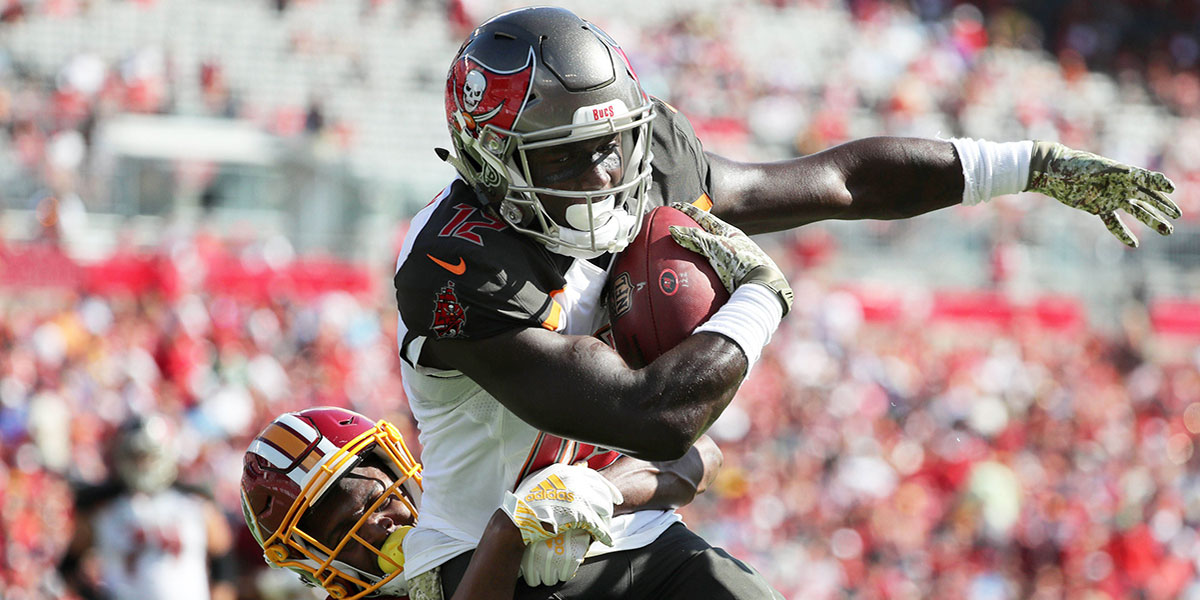 It’s almost like last year never happened. Don’t believe me? Take a peek at the AFC standings, and at the top, you’ll find the New England Patriots. Just like the old days, or well, almost every day over the last 20 years excluding 2020.

And quite honestly, this year’s edition of the Patriots isn’t too different from many of those dominant Patriots teams of the last two decades. Sure, there’s a rookie under center and not the greatest quarterback of all time, but New England’s got a cast of terrific running backs, a collection of solid receivers – none of whom are a true number one, and a defense that’s adept at getting to the passer and taking away the other team’s best option. They’re back, and they’re for real.

As for our best bets, we swept the card last week for the first time in almost two months, but we turned a profit for the fourth time in six weeks. We haven’t exactly dominated the books, but we’re making money and that’s all that matters. Here’s who I like in Week 14 to keep our recent run of winning going, and don’t forget to check out all my picks right here.

It’s with a bit of reluctance that I take the Browns this week, but not because I don’t love this bet – I do. It’s because I have a future on the Browns under 10.5 wins on the year. Cleveland has to win out for my bet not to cash though, so I think it’s safe to take them this week in a great spot against a struggling team.

Here’s how the public views this game: the Ravens are the class of the division, they’re 8-4, and the Browns are a disappointment who’ve already given up on their playoff hopes. All of those things may be true, but there are two counter-arguments. First, the Ravens are struggling mightily. And second, this is a divisional rivalry; there’s no folding the tent in an AFC North bout.

Let’s start with Baltimore. One of these games featured Tyler Huntley under center, but still – the Ravens offense has completely dried up since beating Minnesota in overtime. In the last four games, they’re 2-2 after starting 6-2, and are scoring just 15.3 points per game after averaging 27.6 through the first eight games. The running back room is becoming a problem – Baltimore has no reliable running back to turn to and it’s transitioned them into a passing offense, something Lamar Jackson doesn’t excel in. On top of that, the Ravens secondary is incredibly banged up, and John Harbaugh has no trust in his defense because of it. Look at last week against Pittsburgh. Instead of using the best kicker in the league to tie the game with seconds to go, Harbaugh went for two and the win knowing his defense wasn’t going to be able to stop the hapless Steelers. That’s all the indication you need.

Onto the Browns, they’re coming off a bye and they’ve got revenge on their minds. Their last game was against these Ravens, a 16-10 loss. Cleveland is the home team now, and their season is very much on the line. A loss sends them under .500, and with how tight the AFC playoff race is, a seventh loss will really put them behind the eight-ball.

I’d play Cleveland down to -3, but keep in mind with how low scoring this game has the potential to be, you may be facing a push instead of a win. If you can find -2.5, it’s a full unit bet from me.

I thought this line was a mistake when it opened, but I guess the books are a bit down on Tampa Bay seeing as they’re still without Antonio Brown and they haven’t exactly blown teams out lately. It doesn’t matter, Tom Brady gets up for these games and December-and-on is where he makes his money. Plus, Buffalo is a mess. Let’s take a look.

Really not much needs to be said about the Bucs here, but despite it being a cross-conference game, this is a huge one for this team. Not that it isn’t for the Bills, but many are putting the motivational edge with Buffalo, and I’m not so sure that’s the case. The Bills are fighting for their playoff lives yes, but the Buccaneers are also fighting – for home field. Tampa Bay is currently third, which means if they advance past the opening round, they’ll be on the road for the remainder of the playoffs. That’s not what a warm-weather team wants, so they’ll be motivated.

The Buccaneers also may not get Brown back this season after rumors surfaced of the team contemplating not bringing him back after his suspension. That means Tampa Bay is going to have to evolve their offense and not hold anything back; of late, it’s looked like they’re working around his absence, which has slightly slowed them down.

Tampa Bay’s run defense is also the best in the league in yards allowed per game and in DVOA. They’ve been especially good at slowing down running quarterbacks as well, something that the Bills rely heavily on since they don’t exactly have the greatest running back room. Daniel Jones, Jalen Hurts, and Justin Fields combined for just 30.6 yards rushing per game – below the season average two of the three. And keep in mind – Fields and Hurts are scramblers. Allen is more like Jones in the run game. Designed runs, sometimes power runs or RPOs. Jones had just 10 yards, and the Buccaneers live to stop designed runs, allowing just 84.3 rush yards per game.

Tom Brady inside the 20-yard line since joining the Buccaneers (including playoffs):

Tampa Bay, despite not being the wagon they were earlier in the year, has still scored 30 in all three games after the bye week – all wins, too. Buffalo was hurt by the wind last week, but they’ve been dreadful since their loss to Tennessee. Since a 4-1 start, the Bills are just 3-4 with their only wins coming over the Dolphins, Jets, and Saints, and they’ve exceeded 30 points just once. Good luck keeping up with Tom Brady.

Final point here: the Bills just went from blistering cold and windy Buffalo and now have to play in the heat and humidity of Tampa Bay. That’s not easy. The current line of -3.5 is my limit on this one, play it down to -115.

The teaser of the week is three of its last four, so let’s stay hot by fading the two worst teams in the NFL.

Seattle had been on a brutal losing skid, most of those losses coming without Russell Wilson. But they bounced back with a get-right game against San Francisco, and it could have been more than a seven-point win. It’s almost like getting DK Metcalf involved is a good idea or something. Anyway, there’s no way this terrible Texans defense is going to be able to cover Metcalf and Tyler Lockett. And Tyrod Taylor is no lock to play. Even if he does, he was so bad last week he was benched for Davis Mills. And if Davis Mills plays, we’ll be just fine. The Texans are done winning, especially since the Lions finally won. That number one pick is back in play.

Speaking of the Lions, there’s no way they win two in a row, right? Right. Especially against a Broncos team who is being disrespected, and who is fighting for their playoff lives. At 6-6, they’re very much alive in the Wild Card hunt, but they’ve got to win pretty much every game – especially the ones they’re supposed to win like this one against the one-win Lions. They’re also not a bad team, but the market has continually viewed them as one. They held the Chiefs to 22 points at Arrowhead last week, and in three of the prior four weeks, they defeated the red-hot Football Team, the Cowboys, and the Chargers. Pretty solid, and I like them to play well again.