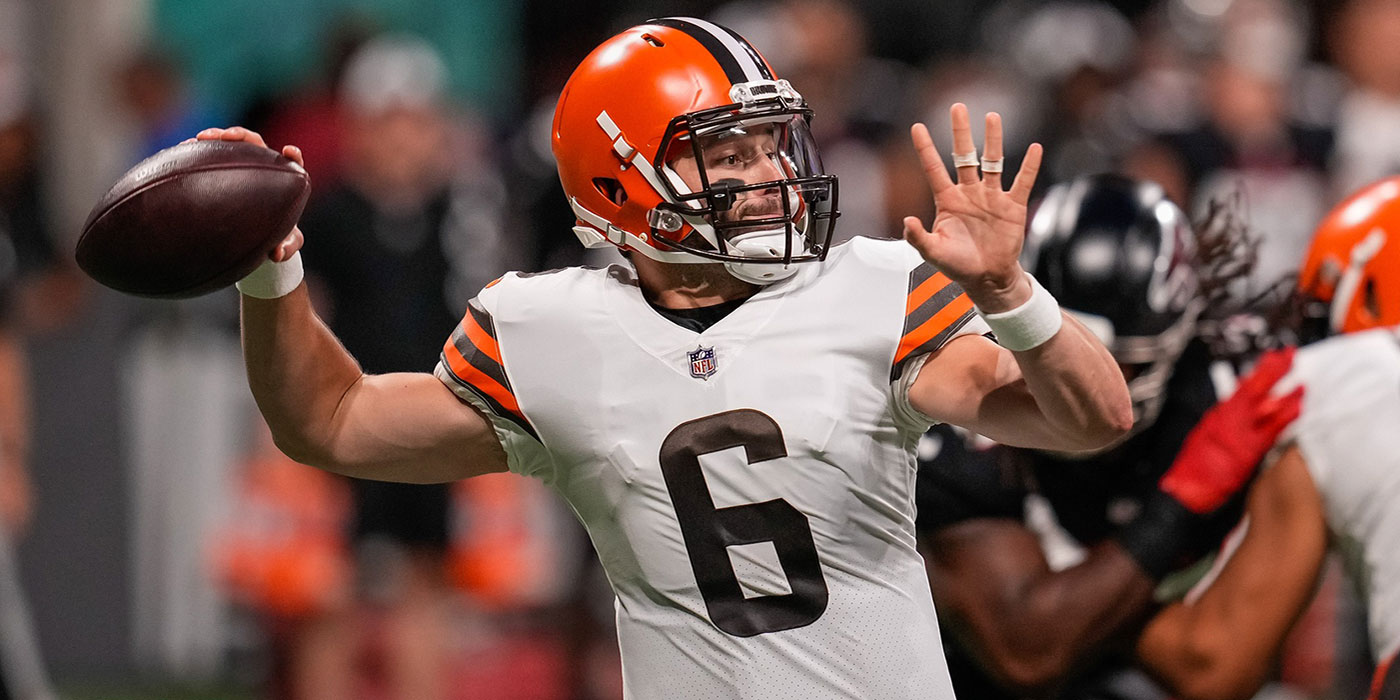 We’re five weeks in and the contenders are starting to separate from the pretenders. As it currently stands, there are ten teams who I can legitimately envision winning the Super Bowl – and even that may be a stretch. That leaves 22 teams who quite honestly aren’t all that good, and while this is the time of the year in most seasons that we see the cream rise to the top, I can’t remember a year where the drop off to the middle-of-the-pack teams was this drastic.

That makes it tough for us bettors for two reasons. First, the obvious: it’s hard to get a read on the non-contenders week-to-week, so it’s difficult to accurately handicap games. And secondly and perhaps more detrimental – the books know it, and they build it into the lines every week. So the likelihood we’ll see a favorable line on teams like the Bills, Rams, and Buccaneers is very low.

As far as our best bets are concerned, we got slightly back on track last week after a disastrous Week 4. Some bad luck caused us to drop our first two bets, but we picked up another teaser win, moving weekly teasers to 4-1 on the year. I have a good feeling about this week, I put in a lot of time researching these games, I’m ontop of the latest betting news, and I’m ready for week 6! Let’s see if we can keep trending upwards.

I bet this at -2.5, but I don’t think it’s falling back to that range before kickoff. In fact, I don’t expect -3 to last long, and wouldn’t be surprised if this closed at Browns -4. I want no part of Cleveland any higher than -3, so shop around and find a book with the best line.

Two weeks in a row I’m fading the undefeated Cardinals, and while that might seem crazy, there’s strong logic behind taking this Browns team after a crushing loss last week in LA. Firstly, they were leading and covering for much of last week’s game against the Chargers, and they lost because they pushed Austin Ekeler into the endzone for a touchdown. Baker Mayfield’s shoulder doesn’t look like an issue whatsoever, and the Browns’ running game is the best in football, so I expect them to return home in front of their insane fans and put on a show.

Speaking of their running game, it’s the best in football and it’s not particularly close. They average 187.6 yards per game on the ground, 15 more yards than the second-ranked Cowboys. They’re first in rush DVOA too, obviously. And that’s a bad matchup for a Cardinals defense that ranks 28th in rush yards allowed. On top of that, take a look at the weather. It’s going to be windy in Cleveland, and early forecasts are calling for winds nearing 30 MPH. That clearly benefits the team who likes to run the ball – Cleveland – and hurts the team who wants to play up-tempo and sling it all over the field – Arizona. Plus, Cleveland played in three home games where winds exceeded 20 MPH last year; the Cardinals didn’t play in any. Advantage Cleveland.

The total is also plummeting in this one. It’s fallen from 53.5 all the way down to 49, indicating that there won’t be many points because of the weather. Finally, Kyler Murray popped up on the injury report on Wednesday with the dreaded injury for a quarterback – the shoulder. He was spotted on the sidelines getting treatment against San Francisco last week, so this isn’t just your run-of-the-mill bump and bruise. He’ll play, but you’d better believe Myles Garrett is just as aware of that barking shoulder as we are.

Over 70% of the sharp money has come in on the under, but the total has actually risen a half-point. Reverse line movement is the first indicator that the under is the right side here.

Secondly, these two teams are coming off emotionally draining games last week. Hell, Dan Campbell cried at the podium after his Lions suffered another crushing last-second loss. And the Bengals played possibly the ugliest game of the year as they and Green Bay traded missed field goals for two quarters, taking the game deep into overtime and putting extra miles on Cincinnati’s legs. This one should start slow, and we may see a few heavy legs as we hit the fourth quarter as well.

And finally, these two teams are just not explosive, despite the perception around both offenses. Since the Lions 41-33 shootout with San Francisco in Week 1, all four of their subsequent games have gone under. Cincinnati’s last three have gone under, including last week’s clash against the Packers that went into overtime. Why? The offenses play so darn slow.

The Bengals run the third-fewest plays per game and rack up the most seconds per play of any team in the NFL. They’re very rarely in the hurry-up, especially because of Joe Burrow’s knee but also because Zac Taylor prefers his offense to huddle up, and these long, drawn-out drives lead to fewer opportunities for not just the Bengals to score, but for their opponents to score. The opponents just don’t have enough time on the field. The Lions are 10th in pace and 12th in plays, which is above-average, but Cincinnati’s defense is actually very good, and Detroit just has very few weapons outside of D’Andre Swift and T.J. Hockenson. The Bengals are seventh in defensive DVOA this season, so even if the Lions want to speed it up, it won’t net them much success.

Here’s where the #Bengals defense ranks after Sunday’s loss to the #Packers:

So. Much. Improvement. And. Growth. pic.twitter.com/ImyNQtKnol

I don’t really foresee this line moving much in either direction because it won’t be a popular total to play, so you can probably afford to wait until closer to kickoff to see if it happens to jump to 48.

Unlike the last two or three weeks where there were teaser options all over the board, there aren’t very many this week. Just the Panthers and Chargers qualify by the Wong teaser rules, and since Christian McCaffrey’s status is murky, I’m going to avoid a Carolina team that’s fallen apart and lost both games without their star running back. Instead, I’ll bend the teaser parameters a little bit and swap in the Chiefs.

Starting with the aforementioned Chiefs, yes, their defense is absolutely awful right now. But I can’t envision Patrick Mahomes and this offense falling to 2-4. The Chiefs are actually ranked dead-last in total defense, but their opponent, Washington, is ranked 31st. So basically this one is going to be score-for-score since the defenses can’t stop anyone, and I don’t care that Washington is the home team. In a score-for-score battle, I’ll take Mahomes over Taylor Heinicke any day of the week.

And onto the Chargers; this team just does not play in games decided by more than one score. Dating back to the beginning of last season, 16 of Los Angeles’s last 21 games have been decided by a single score, so getting them plus more than a touchdown in this one is huge. I don’t want to take them +2.5 because their only weakness is defending the run, and the Ravens run the ball like crazy, but Justin Herbert can move the ball on this defense. And Brandon Staley knows what he’s doing. He may not be a better coach than John Harbaugh yet, but he’s a darn good coach in his own right and he won’t let this game slip away. This is a huge game for LA heading into the bye, so they’ll be able to play extra hard knowing an off week is on the horizon.

Baltimore needed miraculous comebacks against the winless Lions and one-win Colts, so don’t let their lofty record fool you. They’re a good team, but not one I expect to beat a strong Chargers team by nine or more.