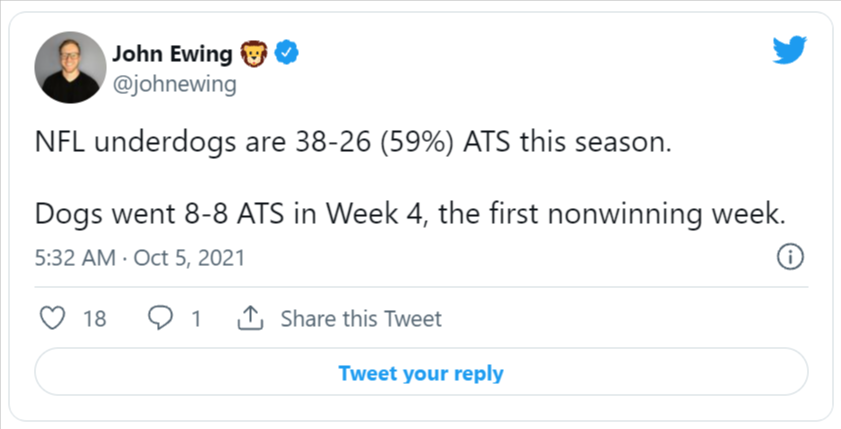 Our best bets featured two underdogs last week – Denver and Carolina – but unfortunately, neither one covered. In the spirit of transparency: last week was terrible; both best bets flopped. Carolina played an incredibly solid first half, but Matt Rhule had a rough second half and swung all the momentum in the favor of a really strong Cowboys team when he opted to kick a 54-yard field goal with Zane Gonzalez. He missed and handed the ball to Dallas essentially at midfield. Between last year and the first four contests of 2021, Gonzalez is 11/19 (57.9%) on kicks over 40 yards – a really bad decision. The Panthers mounted a late comeback, but it wasn’t enough to cover the 4.5-point spread.

As for Denver, we just got caught up in some horrible luck. The Broncos had a great plan to stop the Ravens rushing attack – and it was working. But once Teddy Bridgewater took a helmet-to-helmet shot and Drew Lock had to come in cold off the bench, the bet was toast. And for the first time this year, our teaser failed to cash. The Saints had an 11-point lead at home over a poor Giants team, blew it, and never touched the ball in overtime. New Orleans was also our survivor pick, capping off the worst week since I’ve joined Gridiron Experts and eliminating us from the survivor contest.

It’s a new week and I’m looking to get back to my winning ways. I’m excited, I’m ready to take it down. I had a great week at Nitro Casino, and I want to keep that same energy rolling into the weekend and win some NFL Bets. LET’S GO!

Hold your nose on this one, because it’s ugly. Why on earth am I fading the hottest and only unbeaten team left in the NFL? A variety of reasons, actually, and nearly every trend leans towards San Francisco on the road. Let’s take a look.

For starters, this is a divisional game in the best division in football. Five-and-a-half points is a lot in this situation. San Francisco knows their backs are up against the wall; if they lose and fall to 2-3 in this division, the season is all but over. Plus, 5.5 is such a dead number in football; it sits between all the key numbers, and that tells me that the books are trying to coerce bettors into taking the Cardinals because they’re laying less than the key numbers of six and seven. And because they want us to take the Cardinals, we’re going to do just the opposite.

Also, don’t forget that because of COVID mandates and the wildfires in California last year, the Niners finished the season playing their home games in Arizona. They’re familiar with all things State Farm Stadium.

How about for some data points on the field? Right off the bat, we’re probably looking at Trey Lance under center for San Fran – this is a good thing. I understand fears of easing Lance into action as a rookie, but he’s the better of the two quarterbacks and I probably wouldn’t be as confident in this bet if Jimmy Garappolo was starting. Remember, Lance took a grand total of seven snaps through the first three weeks and somehow had the third-shortest odds for Offensive Rookie of the Year. The books know he’s good, the voters know he’s good, and we know he’s good.

Last week when Lance took over, the numbers were fine – 9/18, 157 yards, 2 touchdowns, and 41 yards rushing – but it was his poise that impressed me. He was completely unfazed by blitzes and seemingly knew exactly how to combat them. And now this week, he’s taken all the first-team reps which is incredibly valuable, and Arizona has a grand total of 46 snaps-worth of tape on him. That’s not a lot, so there’s not a ton that the Cardinals are going to be able to prepare for.

The 49ers offense also operates to exploit all of Arizona’s defensive weaknesses – stopping the run. Arizona is 26th in the NFL in rush yards allowed per game (135.8) and San Francisco runs it ninth-most in football. And that was without Lance under center, who is extremely mobile. The Cardinals are also just 16th in defensive DVOA against the run, and they’ve yet to face a mobile quarterback.

Finally, as I mentioned in the open, Arizona is the last remaining unbeaten team and is looking to become just the 70th NFL team to start a season 5-0 since the schedule expanded to 16 games in 1978. So, only 5.4% of teams won their first five games in a season; five-game win streaks are rare, and every team this year no matter how strong or weak has already lost. The Cardinals will be riding high after skyrocketing to the top of everyone’s power rankings this week, but the Niners are set to knock them off their perch.

You’re going to have to lay an extra 10 cents on this one, but it’s worth it to make sure you secure that extra half-point. Some books have this total set at 20, -110 to the under, but others like BetMGM and FanDuel have 20.5 posted.

Teddy Bridgewater practiced on Thursday, and sure I would have preferred Drew Lock here, but Bridgewater got rocked on Sunday. If he plays, which it looks like he will, I can’t imagine Vic Fangio putting him in harm’s way early. They’re going to run the football early and milk valuable seconds off the clock. As I mentioned last week, Denver led the league in time of possession, but after Drew Lock’s “performance”, they dropped to third. Under Bridgewater, however, they hold the ball longer than any team in the league and that’s fantastic news for any under, especially in the first half when there’s much less urgency.

On the other sideline is Pittsburgh, and what’s left to say about the Steelers offense other than it’s broken beyond repair? They’re 28th in scoring this season, ahead of only the Bears, Dolphins, and Jets, and 26th in yards per play. There’s no downfield passing attack, there’s no blocking, and Ben Roethlisberger looks like he should be sitting with Peyton and Eli on the Monday Night telecast. Big Ben is also extremely banged up, according to both he and Mike Tomlin, so if he can be any less effective than he’s already been, we’re about to see it. Roethlisberger is tied for 28th in QBR this year with Trevor Lawrence and sits ahead of three other rookies on awful teams – Zach Wilson, Davis Mills, and Justin Fields. This offense is dreadful, and the Broncos defense is very good – they’re second in points allowed and seventh in DVOA. It’s a recipe for low scoring.

The first half specifically has been a load of trouble for both of these teams. The Steelers somehow average just 6.0 points per first half, while Denver averages just 11.0. The Broncos also allow just 7.8 points in the first half, and while the Steelers allow 12.5, consider they’ve played Buffalo, Las Vegas, Cincinnati, and Green Bay – and all those teams can certainly score.

I expect a slow start to this one, I can’t envision these teams combining for three first-half touchdowns given the injuries and offensive ineptitudes so far.

For full transparency, my original teaser was Bills and Browns, but then news broke about Baker Mayfield’s shoulder. Then I pivoted to Bills and Vikings, but that line shot all the way down to Vikings -10, putting it out of teaser range. So now I’ve turned to the Bills and Ravens. Here’s why.

Buffalo was going to be one of my best bets at +3.5, but the sharps knocked that all the way down to +2.5. I was still considering betting them, but then Matt Milano, the linebacker who’ll surely be tasked with Travis Kelce duty, missed practice with a hamstring issue. So I’ll just tease them in a really underrated spot. First of all, the Bills are the best team in football, and despite their offense not looking as dynamic as last year, their defense is completely back. They’ve shut out two teams in the last three weeks, and I don’t care that those two teams were Miami and Houston, they still held two NFL teams off the scoreboard which is incredible. Do I think they’re going to shut down the Chiefs offense? I don’t, but I do think they’re much better prepared to stall some drives than they were last year.

Speaking of last year, they’ve got revenge on their minds after losing the AFC Championship Game at Arrowhead in January. They want this one, badly. And the Chiefs defense is anemic. They just gave up 30 points to the Eagles, and have the last-ranked defense per DVOA overall and against the rush, and the second-to-worst against the pass. Good luck! If Milano plays, I expect Buffalo to win, but even if he doesn’t, they’re not losing by more than a touchdown.

We’re teasing the Ravens again, and hopefully this time we won’t have to rely on Justin Tucker to break the record for longest field goal. This one’s simple: the Ravens rock in primetime games, and Carson Wentz is awful against the blitz, which Baltimore does a lot. Under John Harbaugh, Baltimore is 16-2 at home in primetime with a +212 point differential. The Ravens also blitz more than any other team in the league, and Carson Wentz holds onto the ball way too long. He’s already been sacked 10 times this year in four games, and on 6.8% of dropbacks; plus the Ravens average 2.5 sacks per game. It’s a recipe for disaster, and you know Harbaugh isn’t going to let up at any point after his shenanigans at the end of last week’s game. Ravens should cruise to another primetime victory.

Apologies to anyone who tailed last week, and as always feel free to fade or follow moving forward. Thankfully, we started the season on fire and last week’s debacle only dropped us to 6-6. Here are my picks in Week 5 to get this train back on track, and don’t forget to follow me on Twitter: @mjwags23, and you can find all of my Week 5 NFL picks HERE.