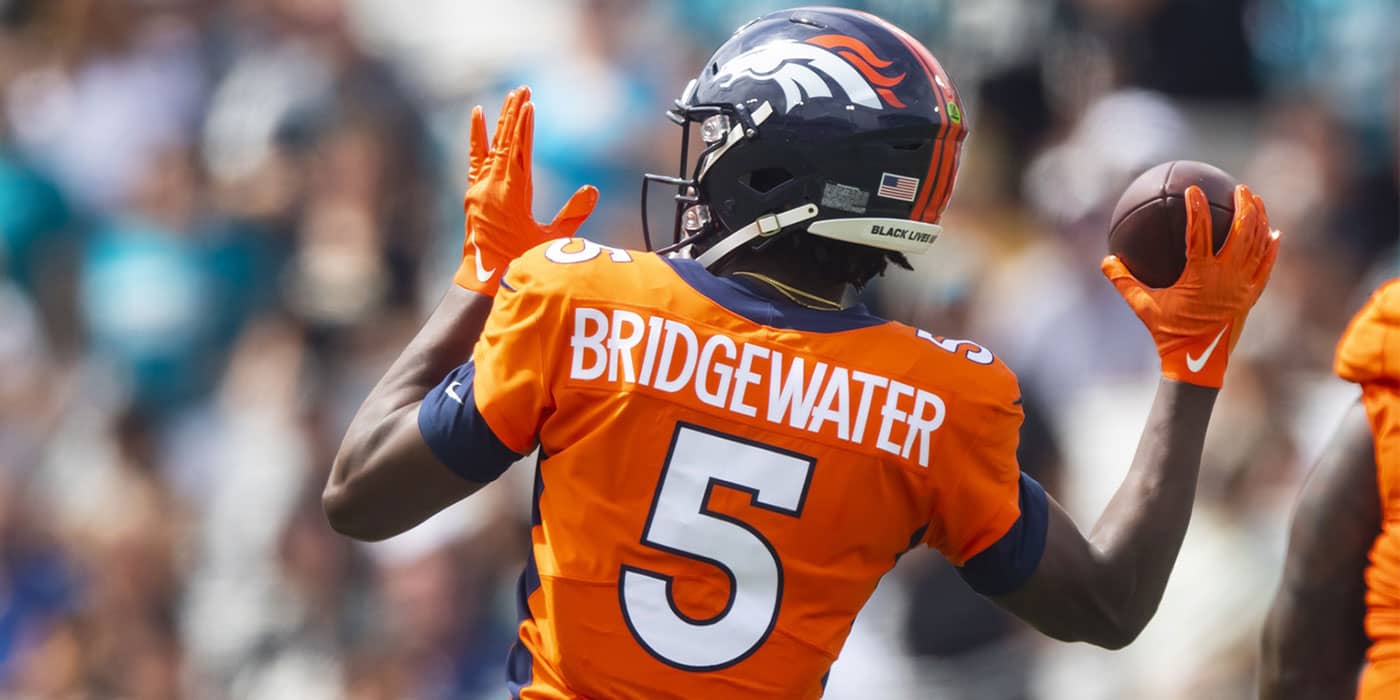 We owe a lot to Justin Tucker. His 66-yard bomb of a field goal not only kept our survivor pick alive, it saved our weekly teaser which pushed us to a perfect 3-0 on teasers this year. Overall, last week was our third-straight 2-1 slate, and if we can keep winning two-thirds of our bets, our wallets will be a lot fatter than they were before the season.

To recap last week: the Patriots let us down at home in a spot I absolutely loved, but the Rams tore apart the Buccaneers’ defense as we predicted, so we split those bets down the middle. As I already mentioned, we cashed our teaser despite pushing the Ravens half of it, moving the overall season record on best bets to 6-3 (66.7%) and +2.09 units.

This week, I’ve got two underdogs on tap to add to our usual weekly teaser and survivor pick. Let’s check it out, and don’t forget to follow me on Twitter: @mjwags23, and you can find all of my Week 4 NFL picks HERE.

This line is all over the place. Some books have the Broncos as a one-point favorite, but the best line is on FanDuel and that’s the one we’ll take. I would bet this one down to Broncos -1 if that’s your only option, but make sure to shop around to find the best line.

Yes, the Broncos have started this season with quite possibly the easiest schedule in NFL history: at the Giants, at the Jaguars, and home against the Jets. But the Broncos don’t make the schedule, and they’ve done everything they’ve been asked to do – blow out those three terrible teams. Their offense isn’t one to put up 30-plus points, but they don’t need to be. They do a fantastic job of putting together long, sustained drives – in fact, they lead the league in time of possession. What’s the best way to beat the Ravens? By keeping Lamar Jackson off the field. Speaking of the field, Lamar Jackson has never played a regular-season game at Mile High. The Denver Broncos have one of the most unique NFL stadiums as they play at the league’s highest altitude. Most quarterbacks struggle to adjust while operating their offense from the pocket, let alone being the team’s top rusher.

The Ravens defense also isn’t your typical Ravens defense. They’re 20th in DVOA, 26th in points allowed, and they’re really banged up. Teddy Bridgewater and company should be able to continue dictating the tempo, especially at home. Denver’s defense has also been really strong, and it’s not just because of the mediocre competition. They’re fifth in DVOA and first in points allowed – giving up just 8.3 points per game.

The Broncos’ defense DOMINATED the Jets.

I also think this is a really tough spot for Baltimore. They’re coming off three incredibly emotional games: an overtime loss to the Raiders, a huge win in primetime against the Chiefs, and a last-second walk-off win in Detroit. Sooner or later, the adrenaline is going to wear off, and now that we know more about the Chiefs poor defense, that win is much less impressive than it was just two weeks ago. On top of it all, they’ll have to travel to Denver and play in altitude, which is never fun for teams who aren’t used to it, but is even less fun for a quarterback who spends half the game running around. And that quarterback, Lamar Jackson, hasn’t practiced yet this week because of a back injury. Whether he plays or not, that injury is going to factor in.

I think the public is doubting Denver too much because of their soft schedule. That’s fine, we’ll fade the public and take Teddy Bridgewater and the Broncos.

This line opened up at +5, which is where I took it, but I still like it at the current number of +4.5. Some books have already dropped the Panthers to +4, at which point I wouldn’t play them, so make sure to jump on this one before Sunday.

This, like the Broncos, isn’t going to be a popular play, but despite how high I am on the Cowboys, the Panthers have some advantages in key areas. For starters, they’re on extra rest. They played Thursday night in Houston, and sure the scoreboard shows that as just a 15-point win, but that game was never seriously in doubt for Carolina. The fourth quarter was relatively stress-free. Dallas, on the other hand, is on short rest. They played Monday night against Philadelphia in an emotional divisional clash. This isn’t just a rest mismatch, it’s a clear potential let-down spot for Dallas.

Secondly, the Cowboys’ offense is certainly loaded, but they haven’t played a defense that’s even close to as good as Carolina’s. They’ve beaten up on the Eagles (14th in DVOA), Buccaneers (17th), and Chargers (22nd); the Panthers rank first in overall DVOA, rush DVOA, and pass DVOA. They also lead the league in pressure rate, and have recorded a sack on 13.9% of snaps – best in the NFL as well. The only key stat they don’t lead the league in is opponents points per game – they rank second (10.0 ppg).

The Cowboys have also feasted on turnovers, leading the NFL with eight takeaways and six interceptions, but the Panthers just don’t turn the football over. They’ve given it away just twice, and only once on an interception. That should help them keep the potent Cowboys offense off the field and create some cracks in an over-performing defense.

The @Panthers #KeepPounding to 3-0. pic.twitter.com/uCqBHOvfUi

The loss of Christian McCaffrey is scary, but Carolina isn’t going to change their game plan whatsoever. They didn’t last week when Chuba Hubbard and Royce Freeman took over for McCaffrey, and despite a drop in talent, the scheme will be exactly the same. The consistency will help keep this offense humming.

There are plenty of teaser options this week again, but this is my favorite combination on the board. New Orleans will finally return home after Hurricane Ida displaced them for an entire month. While normally I’d be looking to fade a team like that, given all the potential distractions, I think this is a perfect opportunity to play the Saints. Their crowd is in need of a boost; it’s been a rough month in the Bayou. They’re going to be into this game and the Saints are going to feed off that.

And secondly, but perhaps more importantly, the Giants are a disaster. They’re so bad that they scored just 14 points against a Falcons defense that allowed eighty points through the first two weeks. Eighty! Now they’ll be without Sterling Shepard, Darius Slayton, and Blake Martinez; they’ll be starting a fourth different left guard in four weeks, and they’ll be running an offense that’s called just seven passes over 20 yards on the entire season. Sean Payton is going to coach circles around Joe Judge, too.

As for the Seahawks, I’m going to trust Russell Wilson and Pete Carroll to right this ship. Since they’ve been together in Wilson’s rookie year of 2012, the Seahawks have never lost three regular-season games in a row. Unless you count losing the last game of 2017 and the first two of 2018. I think they’ll be able to get their offense going in an early must-win game against a 49ers defense that’s hurt, and a bit suspect (19th in defensive DVOA). Also, this is a divisional game, and those are always tight. Getting over a touchdown-worth of points is huge.

For the second straight week, my survivor team is one of my teaser legs. And like last week, I won’t repeat myself with the same handicap as above. But to add, the Saints are a volatile team – up and down. Some weeks like Week 1 against the Packers, they look like world-beaters. But other weeks like Week 2 in Carolina, they look completely out of sorts. They don’t have to be the Week 1 Saints against this Giants team, and this may be the last opportunity we feel comfortable using New Orleans.