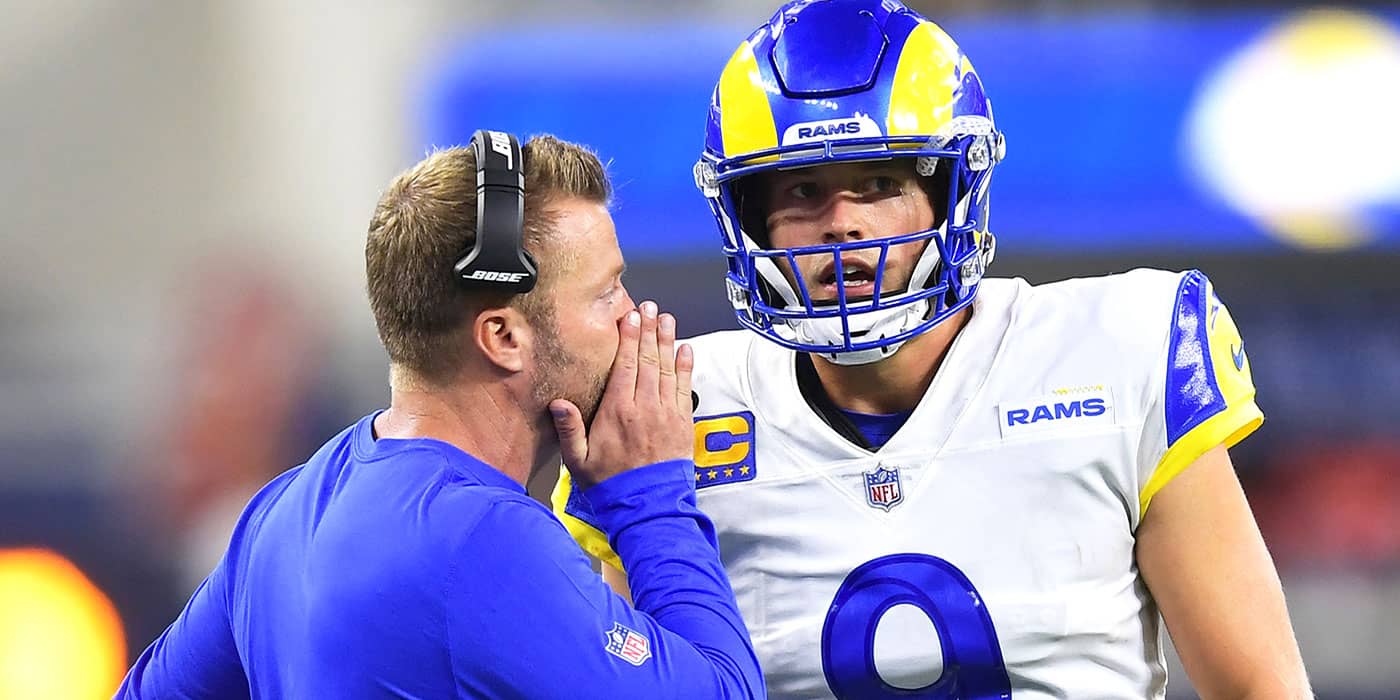 Week 3 is going to be a really fun one in the NFL. The two best teams in the league, in my opinion, will face off in Los Angeles, the Packers and 49ers will battle in primetime on Sunday, and one of the best rivalries in football is set to renew on Monday night when the Eagles travel to Jerry World to take on the Cowboys. Buckle up, folks.

In other news, we’ve had a really nice start to our best bets for the 2021 season. We’ve hit both weekly teasers, both survivor picks, and are 4-2 overall for a total of +1.8 units. There are lots of tough matchups this week, I want to give a shoutout to the predictions on Squawka for some of their tips. Let’s keep it rolling in Week 3, shall we?

I’ve got a favorite and an underdog on tap, my favorite of 30 possible teaser options, and a survivor pick that probably isn’t who you’re expecting. Of course, make sure to follow me on Twitter: @mjwags23, and check out all my Week 3 NFL picks HERE.

This line is still available at both DraftKings and FanDuel, but I don’t think it’ll be available for long. If it moves down to +1, I still like it but I would really rather have that half point in my back pocket.

I’m sure those who follow me on Twitter are floored at this pick, given my borderline-unhealthy love for Tom Brady, but the Rams are the right side of this bet on their home field. Tampa Bay is the best team in the NFL until someone dethrones them, but I’ve got the Rams ranked second – right behind the Buccaneers. And yes, ahead of the Chiefs.

Tampa has been incredibly sloppy over their first two games of the year. They turned the ball over four times in Week 1 against the Cowboys, and were up just three on the awful Falcons late in the third quarter – and the Falcons had the football. Dallas and Atlanta weren’t able to make the Bucs pay, but the Rams certainly will – especially at home. The Rams also have a far superior defense, fourth in the league in DVOA as a matter of fact, so any sloppiness will be taken advantage of and handed over to the fifth-ranked offense in the NFL.

And that fifth-ranked offense is going to go up against a Buccaneers defense that hasn’t been very good at all this season, especially in the secondary against the pass. They’re ranked just 12th in defensive DVOA and 14th against the pass. They’ve allowed 403 yards to Dak Prescott and 300 yards to Matt Ryan, and sure they’ve collected four interceptions already, but Matthew Stafford and this offense have only turned the ball over twice over the first two weeks.

I also think the potential of Antonio Brown missing this game due to COVID is huge. It’s one less receiver for the Rams to worry about, and every team is already basically down a receiver when they have to go up against Jalen Ramsey. Tampa Bay is playing their first road game, they’re traveling all the way to the west coast, and the Rams shouldn’t be home underdogs. They’re too good of a team.

There are also a bunch of -3 (-110) out there, but at just five cents more, I’ll take that half-point to get the Patriots at under a field goal. We actually missed a ton of value, I took New England at -1 before Week 2 even started, but I still like it at the posted number. This bet is really all about the situation for both teams. The Patriots are in a wonderful spot, while the Saints couldn’t be in a worse one.

Let’s start with New England. They haven’t traveled this season at all. They opened up at home, spent Week 2 just a few hours south in New Jersey, and now are back home in Massachusetts; no jet lag, no time zone changes, really barely any time spent away from their daily routines. Their offense may be a bit bland, but from what I’ve seen, they’re giving Mac Jones a bit more responsibility each week. I don’t expect him to turn into Patrick Mahomes and throw the ball 40-plus times in this game, but I do expect a few more intricate plays against a Saints defense that’s good, but also very banged up.

First thing that jumped out to me was the Patriots -1 vs. the Saints in Foxboro, and @RyNoonan hits on it as well. By kickoff, the Saints will have been away from home for almost an entire month. Laying less than a FG is quite enticing. https://t.co/H6h5onin5g

New England’s defense is also back. They picked off Zach Wilson four times last week, and they’ve allowed just 23 points on the season. Jameis Winston is in a much less turnover-prone offense than he was in Tampa Bay, but he’s still Jameis Winston. And the Patriots make you pay for your mistakes, which he has a tendency to let spiral. The staple of Bill Belichick’s defenses has been taking away the other offense’s best option, which is usually a receiver. The Saints really don’t have any receivers, so expect him to do everything in his power to limit Alvin Kamara’s impact, and if he does that successfully – which he usually does – I have no idea how the Saints are going to move the ball.

On to New Orleans; they haven’t been home in a month. Hurricane Ida made landfall in the south on August 29th, and the Saints evacuated the area a few days before that. Game day against New England is September 26th. They’ve been practicing in Dallas, their opening game was technically a home game but it was in Jacksonville, they spent Week 2 in Carolina, and now they travel all the way north to New England in Week 3. The wear and tear of travel showed last week when the Saints laid an egg against the Panthers, and it’s only going to get worse. Good luck dealing with all that on top of trying to solve Bill Belichick’s defense.

Are the Patriots really going to start 0-2 at home? I don’t think so. Give me New England at less than a field goal.

After a week where there was only one legitimate teaser option on the board – Cincinnati – we’ve got a ton to choose from this week.

The first leg of Week 3’s teaser is Buffalo hosting Washington. I’ve mentioned it at nauseam, but I was very high on Washington coming into this year, and so far they’ve been pretty underwhelming. Their defense, which I touted as a top-five unit before the year, has looked completely out of sorts. Allowing 29 points to the Giants? Yuck.

They’re also starting a backup, and it’ll be his first regular-season road start. What worse place to do that than in Buffalo? Those fans are going to be all over Taylor Heinicke, as Buffalo’s dominant victory over Miami last week breathed life back into this team’s Super Bowl aspirations. The Bills found a pass rush last week, their defense has looked much improved, and as shaky as their offense has been, they still scored 35 points against a solid Miami defense. I don’t see Buffalo starting 0-2 at home, and I’m happy to lay just a point and a half on the more talented team.

Next is Baltimore, and I know home teams cover at a better clip in teasers than do road teams, but this is a typical Ravens beatdown spot. Lamar Jackson has absolutely crushed bad teams in his career, and Baltimore has never been shy about running up the score. 59-10 in 2019 against Miami, 49-13 in 2019 and 38-3 last year against Cincinnati, and 40-14 against Jacksonville last year as well – just to name a few.

After all, what do teams do when they want to run down the clock and protect a lead? Run the ball. And that’s really all the Ravens do. Detroit’s defense is bad enough already, and now they’ve got a ton of injuries in key spots to boot. There’s no way they’ll be able to slow down this Ravens rushing attack, which ranks second in DVOA. The Lions rank fourth from the bottom in run defense DVOA, and I just don’t see this one being close.

I’m doubling down on Baltimore, taking them in the teaser and in my survivor pool. In addition to all the points I made above, and despite my usual advice to just win and advance, I think the Ravens are the best pick here. There are plenty of teams to choose from, but when are we going to have the chance to take the Ravens again? I know they’re on the road, but this is when you take Baltimore; this is the dream scenario: Lamar Jackson against a bad team who can’t stop the run.

The Ravens have a tough schedule, they play in a tough division, and they’re a high-variance team. Some games they look unstoppable, and others they look like their offense is coming apart at the seams. I don’t want to be on them on a night when it’s the latter. They’re hard to trust in most spots, but not this one. Give me Baltimore.