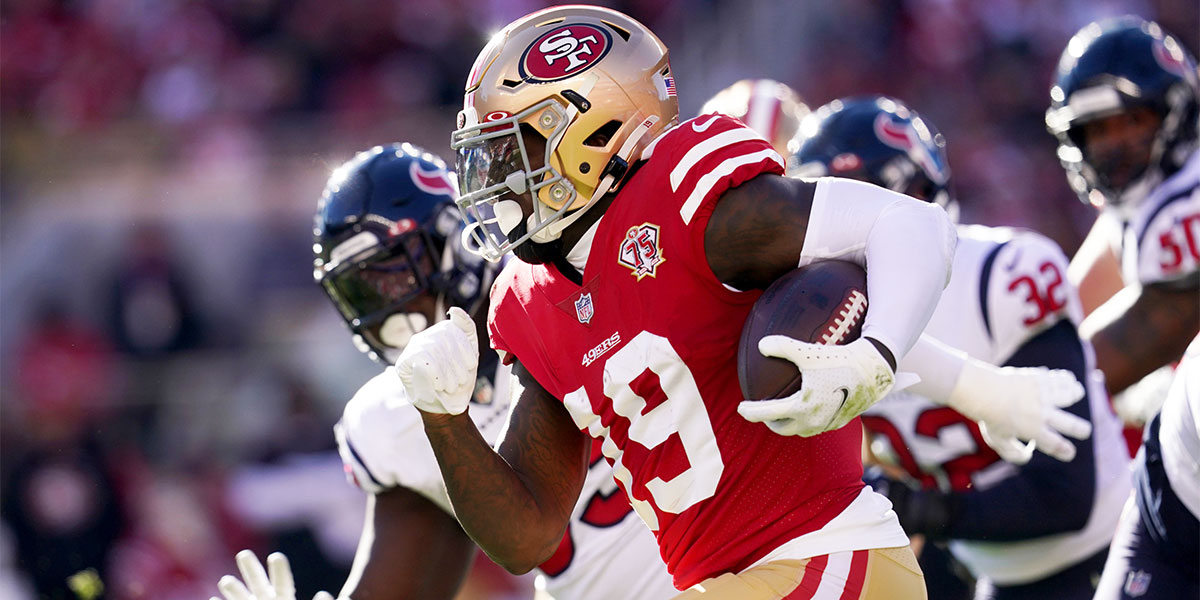 This past week, San Francisco 49ers WR Deebo Samuel has made it clear that he no longer wants to play for the team. According to NFL Network’s Ian Rapoport, Deebo essentially told the 49ers that he is unwilling to work out a long-term contract with the team and wants to be traded.

So, heading into the upcoming 2022 NFL season, who can we expect to step up in the new-look 49ers’ offense after presumably losing their star player? How has each of the other 49ers’ weapons performed in games that Deebo Samuel has missed*? In this article, I will outline which players’ fantasy value will benefit the most from this potential trade.

*In 2019 & 2021, Deebo only missed one game. So, for those years, I included games in which he earned 1 or fewer receptions as games without Deebo. These are games where Deebo was mostly an RB or just being completely unused in the receiving game.

Aiyuk played 12 total games in his rookie year, with 7 of those games coming without Deebo. Within those 7 games, Aiyuk had two awful lines of 2/21/0 in his first career game and 1/15/0 in his final game of the season. However, Aiyuk’s averages through the rest of his rookie season look completely different from those lines. Since those two games are significant outliers compared to the rest of Aiyuk’s rookie year, I have chosen to remove them from his averages. Furthermore, since Aiyuk spent the first seven weeks of his sophomore season in HC Kyle Shanahan’s “doghouse,” I am using games from Week 8 and beyond to compare for splits.

Moving into Aiyuk’s TGT % and PPG splits in his games with vs. without Deebo: 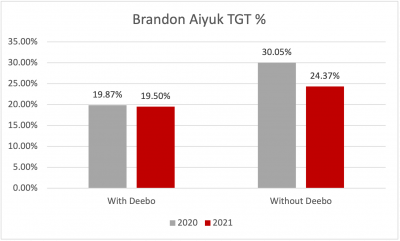 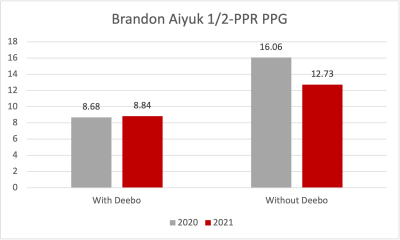 As you can see, even when standing alongside a star player in Deebo Samuel, Aiyuk can maintain a ~20% target share and put up ~9 half-PPR PPG. More importantly, in games where Deebo is absent and Aiyuk becomes the main target, he takes over. Following the news of Deebo’s likely departure from the team this past week, I expect Brandon Aiyuk to completely break out in his third season.

According to Fantasy Football Calculator, Aiyuk is being drafted in the sixth round of most 12-team fantasy drafts, an entire round later than he was being taken last season. If Deebo is traded before the season begins, I would have no issue drafting Aiyuk in the fourth round or potentially even towards the back end of the third round.

My “floor” projection (worst case scenario) for Aiyuk for the 2022 season would be about a 25% team target share and around 12 half-PPR PPG. This would typically land him around WR12-18 depending on the number of games he may miss. As Aiyuk is heading into his third season, the typical WR breakout year, his upside in 2022 fantasy football is indisputable. I would not be surprised to see him finish within the top 10, perhaps even top 5 WRs.

Kittle’s splits with and without Deebo aren’t nearly as clear of a difference as Aiyuk’s. It seems as if he may have been even better alongside Deebo in 2020. However, since Kittle’s missed 11 games over the last two years, it’s difficult to project similar numbers.

Moving into Kittle’s TGT % and PPG splits in his games with vs. without Deebo: 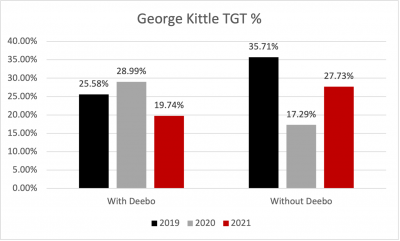 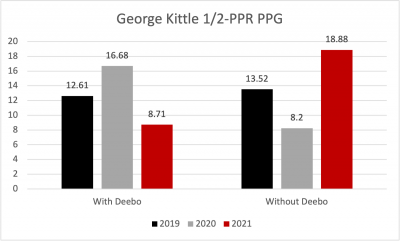 According to Fantasy Football Calculator, Kittle is currently ranked as the TE3 behind Travis Kelce and Mark Andrews. I have no doubts that as he has done in 3 of the last 4 seasons, Kittle will finish as a top-3 TE again in 2022. However, I would not be drafting him ahead of either Kelce or Andrews, even with the potential trade of Deebo Samuel.

I expect second-year QB Trey Lance to become the starter and do well in San Francisco this upcoming season, but it would be absurd of me to project Lance to be as great as the 2018 and 2019 MVPs in Mahomes and Jackson. For these reasons, I will continue to rank Kittle behind both Kelce and Andrews based on their entire offensive projections. Of course, anything is possible, but I’d stick with what we’ve seen time and time again over what we’re expecting for the future.

With a new, young QB in Trey Lance becoming their starter and the likely departure of their star receiver in Deebo Samuel, the 49ers’ offense will look completely different next season.

The sky is the limit for their best remaining weapons if Lance performs as advertised, with the potential for Aiyuk to finish as a top-5 fantasy WR or Kittle to potentially finish as the TE1. However, even if Lance disappoints in his first full year as a starter, Kittle will continue to be a top-3 fantasy TE, and Aiyuk will likely become a low-end WR1 / high-end WR2, as long as Deebo is traded.