Fantasy High 5 is a Gridiron Experts exclusive article that we featured weekly throughout the NFL season. Sadly, there is only one game left this season, so we thought we’d touch base on a few popular topics from around the league. Make sure you check back throughout the off-season as Gridiron Experts has a lot of huge things planned!

With Michael Turner rumored to be gone and Tony Gonzalez retiring, do you see Jacquizz Rodgers stepping up, or will replacements be targeted at the NFL Draft?

Ryan Miller: You always need depth at the “playmaker” position. I think Jaquizz will get his chance to be that guy but they won’t focus on him. They will have other options if he doesn’t live up to the potential.
Chris Strong: There’s no doubt that Jacquizz Rodgers will get his shot…but now is the time for him to step up into that prime time running back role if he doesn’t want to lose it to someone else.
Jody Smith: Turner just doesn’t have it anymore, so Atlanta will likely look for a similar big back to take early-down carries. Rodgers is better suited for a complimentary role. Starting running backs are just not a priority in today’s NFL, so don’t look for the Falcons to address it early on.
Zhan Mourning: The Falcons will bring someone else in for sure if Turner leaves, if not only for the sake of depth. Jason Snelling is under contract through 2014, but Rodgers will get the majority of the work if Turner does in fact leave.
Brian Jerzak: As explosive as Rodgers can be, he is not an every down back. The Atlanta Falcons will have to find a replacement. If he is the every down back I don’t think he holds up for an entire year. That being said, the Falcons are a pass first team, so they don’t need to find a superstar runner to keep that offense effective.

All rumors and reports aside, what are your thoughts on an Alex Smith trade going down, and what is he worth as far as draft picks?

Ryan Miller: I think an Alex Smith trade is inevitable. It is so unfortunate for him the way he went down. It’s not like he even did anything wrong. But like every other NFL player he doesn’t want to be a backup. I would trade as high as a second round pick for him if I was in desperate need of a QB (Jacksonville, Kansas City, or New York Jets).
Chris Strong My heart goes out to Alex Smith. The man did a heck of a job the past two seasons helping the Niners regain momentum in the NFC West, not to mention Smith himself has made vast strides in improving his game. Being replaced by Colin Kaepernick probably hurt, but now Smith might have the opportunity to help out some other dying franchises regain the steam they need in their respective divisions. I could see some teams giving up some relatively high draft picks to acquire him.
Jody Smith: A mid round pick at best. I can’t see a team trading for a game manager like Smith when they could wait for San Francisco to cut him, or take a chance on a more atheltic and less expensive (due to the new CBA) option in the draft.
Zhan Mourning: Young and athletic playmakers taking over the quarterback position is the new craze in the NFL. Given that, I can’t see many teams, if any, interested in Smith other than as a possible backup. I think most teams would rather roll the dice on developing a prospect.
Brian Jerzak: I am with Jody on this one. A late round pick at the most. Every team knows the Niners need to get rid of him. I think the league will just wait San Fran out until they have no choice but to cut him loose. 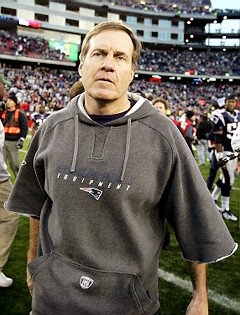 Thoughts on Bill Belichick’s sportsmanship after the Ravens loss?

Ryan Miller: No one wants to give an interview after a tough loss, especially in a game that could have taken your team to the Super Bowl. John Harbaugh says Belichick was classy and I will take his word for it.
Chris Strong: I have always respected Bill Belichick, but he at least could have given John Harbaugh a proper handshake at the end of the game…then sulked into the locker room. Ryan is right…no one wants to be interviewed after a tough loss, but I think it’s a sign of respect to properly acknowledge your loss by congratulating the other team.
Jody Smith: Understandable to feel dejected after a big loss, but no reason to disregard your opponent or media obligations. Typical behavior from a sore loser.
Zhan Mourning: I’m not sure why everyone is so upset about this. Belichick has always been smug with sportmanship and comments. Rarely does he ever give the media the time of day, not to mention the truth, regarding anything Patriots.
Brian Jerzak: If he likes it or not, it is part of the job. Belichick is one of the best coaches, maybe all-time, but if I was the NFL I would consider fining him every time he pulls this stuff.

Ryan Miller: Everyone watches the Super Bowl every year and it has become famous for the commercials. I love any crazy prop bet involving commercials and am a huge marketing sucker. I like all of the beer companies to put out good ads so I would take any beer company in a pick the highest rated commercial bet.
Chris Strong: Ryan is right as far as commercials go…I would say the Doritos commercials have always made me laugh…but as far as wacky goes…maybe something along the lines of the Super Bowl halftime show…it’s been a while since we’ve seen any “wardrobe malfunctions.”
Jody Smith: Number of times they show Jack Harbaugh on TV…take the over.
Zhan Mourning: Will Beyonce lip-sync the halftime show like she did the presidential inauguration?

Name one sleeper free agent that could hit the open market, and in your opinion could be a nice addition for any team?

Ryan Miller: A great free agent signing that I have been talking about is potentially Greg Jennings going to Miami. I have absolutely nothing to base this on except his contract is up and the Phins need a deep threat, true number one threat.
Chris Strong: Being a Packer fan, I would have to agree with Ryan on Greg Jennings. I love him as a wide out, but wouldn’t be surprised to see him peace out of Green Bay. Another may be Dustin Keller. Keller had an injury plagued 2012 year, but it might be worth taking a risk on him come 2013. He was one of the Jets more formidable receivers in years past…given the Jets didn’t have much of a threat there.
Jody Smith: There’s some big-time talent available for the many receiver-needy teams out there. Jennings, Mike Wallace, Wes Welker, Dwayne Bowe and Danny Amendola will be highly sought after targets.
Zhan Mourning: There are so many names this year at many different positions, but one name that people may be discounting is Joe Flacco. Let’s face it, he will probably re-sign with the Ravens given he helped them get to the Super Bowl, but there’s always that chance a team will over pay to get a top quarterback. However, the announcement of JaMarcus Russell making an NFL comeback could hinder Flacco’s chances.
Brian Jerzak: Right now it looks like the Dolphins and Jake Long are having trouble getting together on a deal. If they let Long go, I can’t think of a team who wouldn’t be interested in a young left tackle.

This article was written as a group effort by our team. Make sure you bookmark Gridiron Experts today to stay update on all our content!